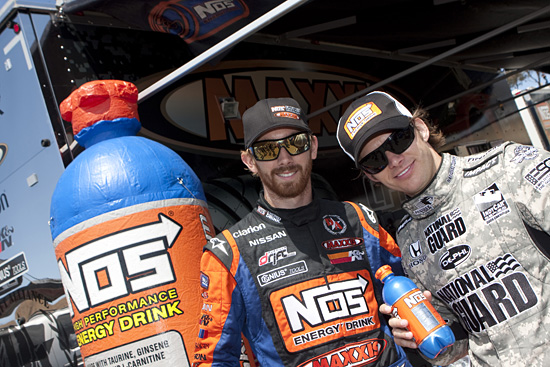 “Dorifto Dan” connected with fellow NOS-sponsored driver Chris Forsberg in the FormulaD paddock at Infineon last month, and while he didn’t get a chance to spend time at right angles in Forsberg’s V-8-powered Nissan 350Z. Once the IndyCar season winds down, all that could change, Wheldon says.

“We’ve definitely had some conversations about setting it up where I could drive Chris’ car and try some drifting. Those guys are talented and it’s really entertaining to watch in person. If you’re drifting in an IndyCar it’s never really a good thing! I know driving the NOS car is something I would enjoy, and it’s always good fun when you’re fortunate enough to get the opportunity to drive a racecar from a different discipline. A few years ago I competed in the Race of Champions and was able to try to rally, and that was fun as well. We’ve had the same conversations with Dale (Earnhardt) Jr. about swapping out our National Guard cars for a test, but we’ve all got busy schedules and it’s always difficult to pull off, but hopefully that’s something we can work out. The off-season in IndyCar is really long, and I’m not the type of person that can go too long outside of a racecar.”

For Forsberg, he’s a rare character. Unlike most of the other FormulaD competitors, he comes to the sport with an empty resume. The Doylestown, PA-native is leading the 2009 FD standings with one round to go, and if he winds up with the title, he’ll be looking to expand his reach beyond Formula D.

“I have no other motorsports experience other than drifting, but after watching the precision driving and the abilities of the IndyCar drivers — to have control their cars at such high rates of speed – it’s really fascinating. Karting seems to be an easy transition for most drivers to get that type of experience and I would love to get more seat time behind a kart and expand my skills. I don’t know if Dan’s ready to put me in the National Guard car quite yet…but I’m up for the swap if he is!”

To my surprise, I learned another British IndyCar driver has some ties to drifting.

“I did it once back in England when I was driving for Jaguar in F1,” Justin Wilson told me. “They had a drift car — I can’t remember what it was called – some XKR-R – which wasn’t really set up for drifting! They had a competition going on at Silverstone and all different people there with different road cars. Some setup for drifting, some not. And people just went out and played. And that’s when it kind of first started to come across the UK. Jaguar just gave me this car…we had a bit of fun, but it was more of a race car. It’s a little snappy as opposed to a nice, fluid drift car.

Wilson could hold the distinction of being the only F1 driver-turned drifter-turned IndyCar driver, and given the opportunity, he wouldn’t mind giving it another go. Next time, he’d want a serious machine to drive.

“Yeah, that Jag was fun; we did a run through a couple of corners at Silverstone, but I’d want a proper car next time. It was more like I was fighting an ill-handling GT car than actually getting to grips with a well-balanced drift car.”

Wilson pulled off an impromptu drifting session at the final corner at Sonoma when an aggressive pass attempt left his Z-Line Designs IndyCar in a lurid broadslide. Bad Ass quickly gathered it up and left a haze of Firestone rubber hanging in the air. And how did he rate his Infineon performance?

“It was average…I could have done more tire smoke but it’s always a trade-off between style and speed. We’ll see what the judges think of me next time!”