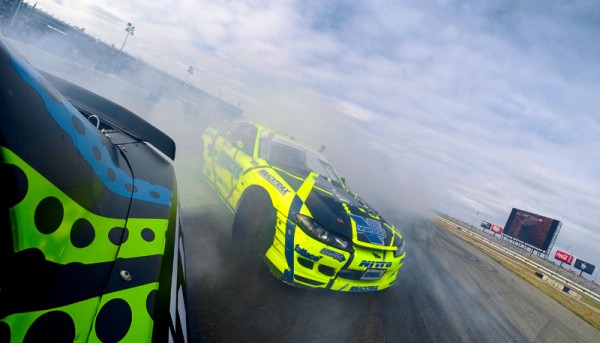 The incredible GoPro footage from a Formula DRIFT run paints an exciting picture of intense wheel-to-wheel action and driving prowess, but many who aren’t familiar with DRIFT may assume that it is merely head-to-head racing on a short course. But that, indeed, is not the case. In fact, Formula DRIFT is the only motorsports discipline that relies on subjectivity to find a winner. More specifically, a win is based upon a judged score, not who crossed the finish line first.

So how do you score big in DRIFT, you ask?

Each run is judged on three criteria: Line, Angle, and Style. And, what does that mean exactly? Let’s explain.

LINE
The drift line is defined as the ideal path a vehicle must take on course and is marked by inner clipping points and outer clipping zones. The exact line of each track is dictated by the judges. It is laid out in a such a way to push the driver to use the entirety of the course from wall to wall. Aline judge awards a whole number ranking from 1 to 25, based on how well each driver follows the prescribed line.

ANGLE
Also during a run, an angle judge monitors the overall slip angle the driver uses over the course of the qualifying pass, rewarding a driver with more points (1-25) for pushing the limits in as many places as possible. Steering adjustments should be minimal mid-corner, and transitions from one corner to the next should be as smooth as possible to maximize points.

STYLE
A final style judge monitors the overall smoothness and excitement of the run, giving a score from 1 to 30. Aggressive flicks, closeness to walls, degree of difficulty, fluidity, and extreme proximity to the lead vehicle all come into play in the judgement process. Additionally, both line and angle judges will provide a style score from 1 to 10 to supplement the overall score from additional perspectives.

So it’s more about working the course and pushing your car to the limit. It’s not a race; it’s a contest. Check out the video for an even better look into scoring.

The Formula DRIFT series has been weaving across North America all summer, and is culminating for a Final Fight October 9th and 10th at Irwindale Speedway. If you find yourself in Southern California this coming weekend, do yourself a giant favor and come out to the most exciting stop in the series. GoPro is proud presenting sponsor of the series and we will definitely be there capturing insane content.