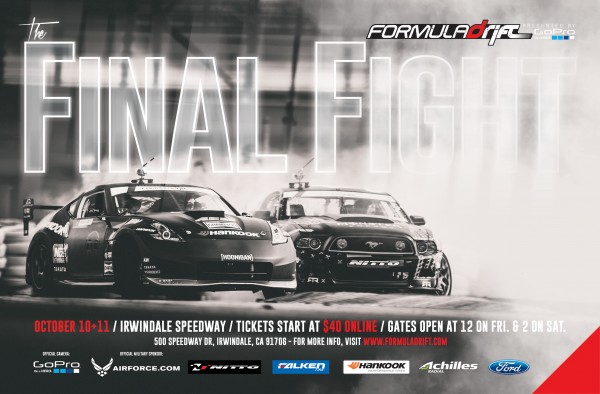 As we enter the final round of competition at Irwindale Speedway, only two drivers have a mathematical chance to win the coveted Formula DRIFT championship. Round 7: Final Fight will pit the 2009 champion Chris Forsberg, who leads the standings with 493 points, against Fredric Aasbo currently sitting in second with 467 points. A 26 point difference.

In order for Fredric to make up the 26 point deficit he will need to finish two rounds further in competition than Chris. This does not take into consideration qualifying points, which may play a large role in the championship this season.

Example 1: If Chris gets knocked out in the Top 32 then Fredric would need to advance to the Top 8 in order to win the championship.

In this scenario the point totals would look like this:

Example 2: If Chris finishes in the Top 4 then Fredric would need to win the event to earn the championship.

In this scenario the point totals would look like this:

Again, this is without considering qualifying points in which Forsberg has averaged a higher qualifying position this season with an average qualifying point total of 6.83 points, while Aasbo is averaging 4.5 qualifying points. If the two meet head to head they will control their own destiny on the way to a championship. This season Fredric and Chris have faced each other on three separate occasions and Fredric has won each time. The only thing that is for certain is that this will be an exciting and climatic event to crown the 2014 Formula DRIFT champion.