LONG BEACH, Calif. – July 11, 2008 – Formula DRIFT, North America’s premier drifting Sanctioning Body, has partnered with Red Bull Energy Drink, the world’s leading energy drink, to create one of the world’s most anticipated drifting events ever – the Red Bull Drifting World Championship. The event, which will feature 32 of the world’s best drifters, will be held on the docks at the Port of Long Beach, Calif., on Saturday, November 15, 2008.

The Red Bull Drifting World Championship will bring the best drifting drivers in the world together to compete in a single historic event. Drivers from the United States, Japan, Australia, New Zealand, Malaysia, Singapore, Europe and Canada will participate, but only one will claim the title of Red Bull Drifting World Champion. Current and past champions from the world’s top professional drifting series will receive an exclusive invitation to showcase their skills and compete for the largest drifting prize purse ever offered.

“Formula DRIFT has worked over the last five years to bring the drifting world closer together via our partnered events in Singapore and Mexico as well as our open door/open dialogue with the top professional drifting leagues from each corner of the world. We are excited to be able to team up with Red Bull to bring the world together and stage the toughest competition with the best drivers,” stated Jim Liaw, President/Co-Founder of Formula DRIFT.

The purpose-built course will include unprecedented features that will test the limits of the drivers and their cars such as a long straight to ensure triple-digit entry speeds, a big, sweeping first turn for high-speed drifting and multiple, technically challenging turns. Trackside viewing areas will allow spectators to get up close and personal with the competition.

“It is an exciting time for the sport of drifting. Red Bull is the leader for innovative sporting events worldwide and now drivers will be challenged like never before in a completely different environment than we’re used to,” said Rhys Millen, 2005 Formula DRIFT champion. “I’m proud to be flying the Red Bull colors heading into the Red Bull Drifting World Championship.”

Formula DRIFT, North America’s professional drifting championship series, will play the role of organizer, co-promoter, and sanctioning body for the World Championship event. Judging will be based on current Formula DRIFT rules and regulations with the possible addition of two international judges.

More information will be disclosed at a later date including brand and media partners and participating drivers. 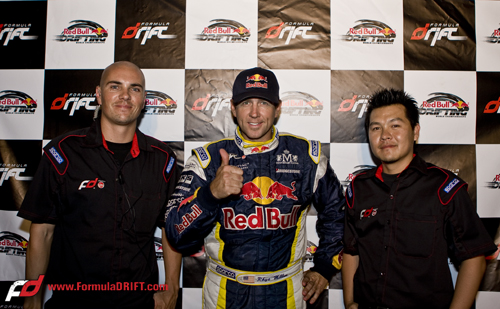