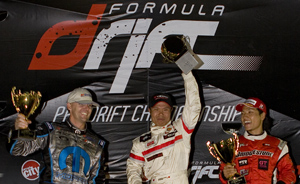 Entering Las Vegas Motor Speedway for the first time the Formula DRIFT Championship came back to the West Coast. The course became the fastest on the circuit with multiple drivers topping the high 90 mph range with their initial drift through the challenging track. The competition was as tough as ever with many new faces and vehicles entering the competition.

The event showcased one of the most diverse fields in Formula DRIFT history with the world’s best drivers from around the world participating at the event. Drivers such as Toshiki Yoshioka from Japan, Christian Pickering from Australia, JT Wharerau from New Zealand, and world renowned Japanese champion Manabu Orido made his Formula DRIFT debut. Japan came out on top with both Daijiro Yoshihara in his Bridgestone / RMR Pontiac Solstice GXP and Toshiki Yoshioka in his ASpec / Works Bell Toyota Sprinter Trueno making it to the finals. After a hard fought battle, Formula DRIFT rookie, Toshiki Yoshioka took home top honors in only his 2nd Formula DRIFT appearance.

“The diversity of the series was proven with drivers coming from around the world to compete in Formula DRIFT competition,” said Jim Liaw, President and Co-founder of Formula DRIFT. “You never know who will come out on top as proven with 3 Toyota Corollas making it to the head to head round and upsetting some of the higher horsepower vehicles.”

At the halfway point of the season the competition for the Castrol SYNTEC Power Cup is as tight as ever with 2007 Formula DRIFT Champion Tanner Foust and his Rockstar / AEM Nissan 350Z leading the way and with less than 15 points separating Foust from 2-time Formula DRIFT champion Samuel Hubinette in his Nuformz Racing / Mopar Dodge Viper SRT10 in 2nd place and contender Daijiro Yoshihara in his Bridgestone / RMR Pontiac GTO following in 3rd, it will be a hard fought battle to the end. This event also marked the 2nd event for the Tires.com Triple Crown bonus prize and previous winner Rhys Millen leads the way by 4 points over teammate Daijiro Yoshihara. Formula DRIFT action continues on August 9 at the Evergreen Speedway in Monroe, WA.