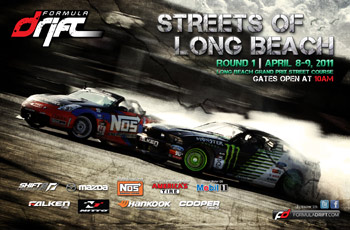 “We are especially excited to kick-off the new season in Long Beach,” said Jim Liaw, president and co-founder of Formula DRIFT. “This will be our fifth consecutive year utilizing the Toyota Grand Prix of Long Beach Street Course, which is the only street course on the circuit. With new drivers, new competition vehicles and non-stop drifting action we are expecting another sell-out crowd.”

Round 1: Streets of Long Beach will feature the return of champion Vaughn Gittin, Jr., the much anticipated debut of the Need for Speed 2011 Scion TC of Papadakis Racing with Formula DRIFT rookie of the year Fredric Aasbo behind the wheel, 2009 Champion Chris Forsberg and his new NOS Energy Drink Nissan 370Z, along with the rest of the talented driver pool. Newly added for this event will be an expanded VIP section and multiple Jumbotrons for better viewing throughout the venue.

Tickets are now available for Round 1: Streets of Long Beach on April 8-9, including reserved seating, 2-day ticket packages, and VIP tickets. Tickets can be purchased through www.formuladrift.com, Ticketmaster outlets, and the Long Beach Convention Center box office. Ticket prices start at $27 online with reserved tickets available for Saturday’s competition day. 2-day packages are also available along with VIP ticket packages.