The Formula DRIFT Driftstream Continues into the 2011 Season;
New Features to Debut at Round 1: Streets of Long Beach on April 8-9, 2011 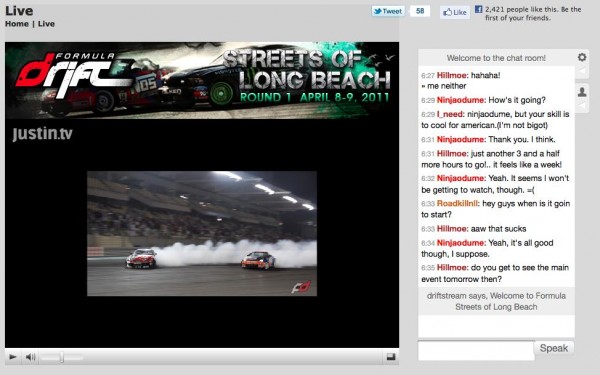 Long Beach, Calif. – April 8, 2011 – After a very successful 2010 Pro Championship season and two International events for the Driftstream, Formula DRIFT will continue providing live coverage through the online platform. New features will be implemented for the 2011 season.

During the 2010 season over 1,000,000 viewers tuned in to watch the live action unfold over the 7 Pro Championship events. The combined traffic for both the Formula DRIFT UAE Invitational at Yas Marina Circuit in Abu Dhabi and the Formula DRIFT Global Challenge at the Qatar Racing Club topped 95,000 in only 8 hours of on-track action. Over 1 million minutes were watched during these 2 events that aired in the United States in the early hours of the day. During the Qatar event, the Driftstream also implemented for the first time live color commentary from the 2010 Formula DRIFT champion, Chris Forsberg as he gave his expert commentary during the action and interacted with fans.

“The Driftstream has been a tremendous addition to our program and has provided all of the action of a live event directly to the fans,” said Ryan Sage, vice-president and co-founder of Formula DRIFT. “We look forward to continuing the success of the Driftstream throughout the 2011 season, while constantly looking for ways to improve the program for the fans.”

The Driftstream will continue to innovate itself and will introduce new features for the 2011 Pro Championship season. GoPro cameras will be utilized to allow interaction between fans and Formula DRIFT drivers and celebrity guests. A new Facebook application will also be launched this season. The new features will debut on April 8-9 during Round 1: Streets of Long Beach. New sponsors for the season include Need for Speed, Nitto Tires, GoPro, Enkei, ACT, Kenda Tires, Motegi Racing and Mishimoto.