The hottest round of the 2015 Formula Drift season brought us to an entirely new track, with only a few turns the track made up for numbers with size. For the past few years Round Three has been held in Palm Beach and Miami, but this year the series took on Uncharted Territory at Central Florida’s Orlando Speed World, set up in a classic figure-8. 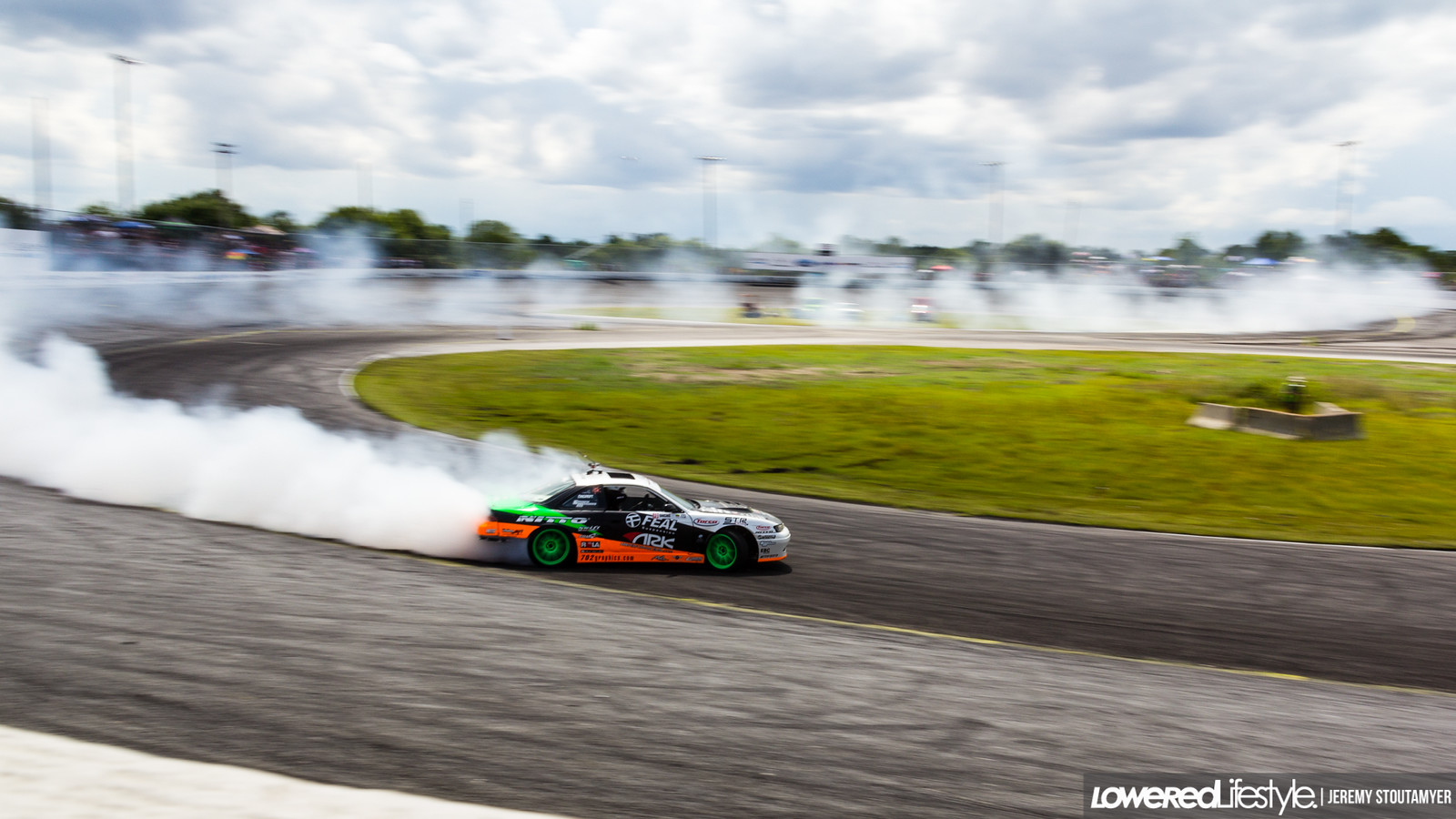 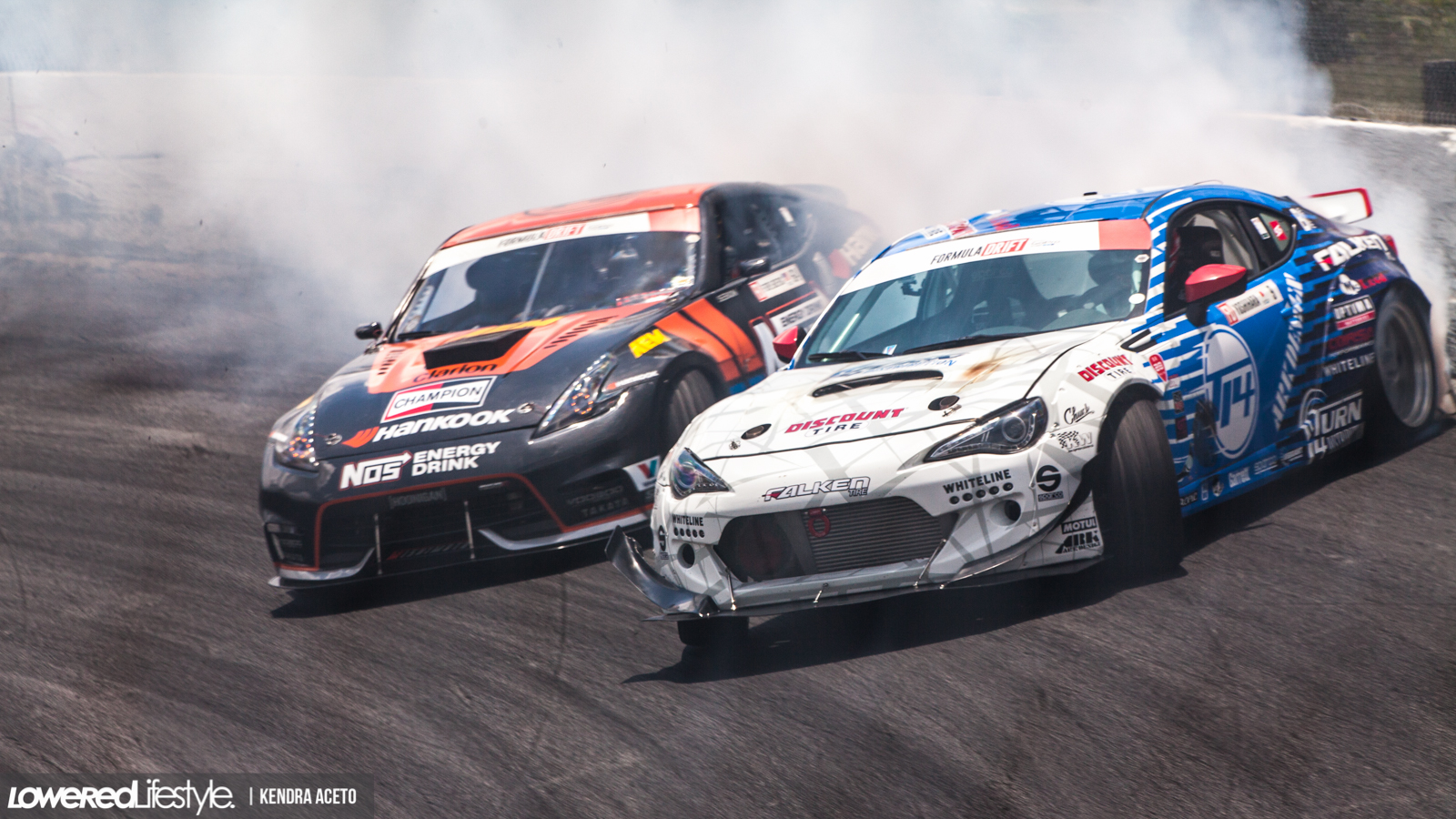 The weekend not only marked a first at the new venue, but it marked the first Pro 2 event of the season! Introduced last year, Pro 2 is now the stepping stone for Pro AM drivers who have earned their license by finishing in the Top 4 in their respective regional series. This allows an easier transition into the Pro atmosphere, pinning the top Pro AM competitors against each other for a ticket up. While Pro 1 is a 7 event series, Pro 2 is on just 4 of those stops. Travel, wear and tear on the vehicle, and other expenses can be difficult to cover as a driver coming into their rookie pro season. 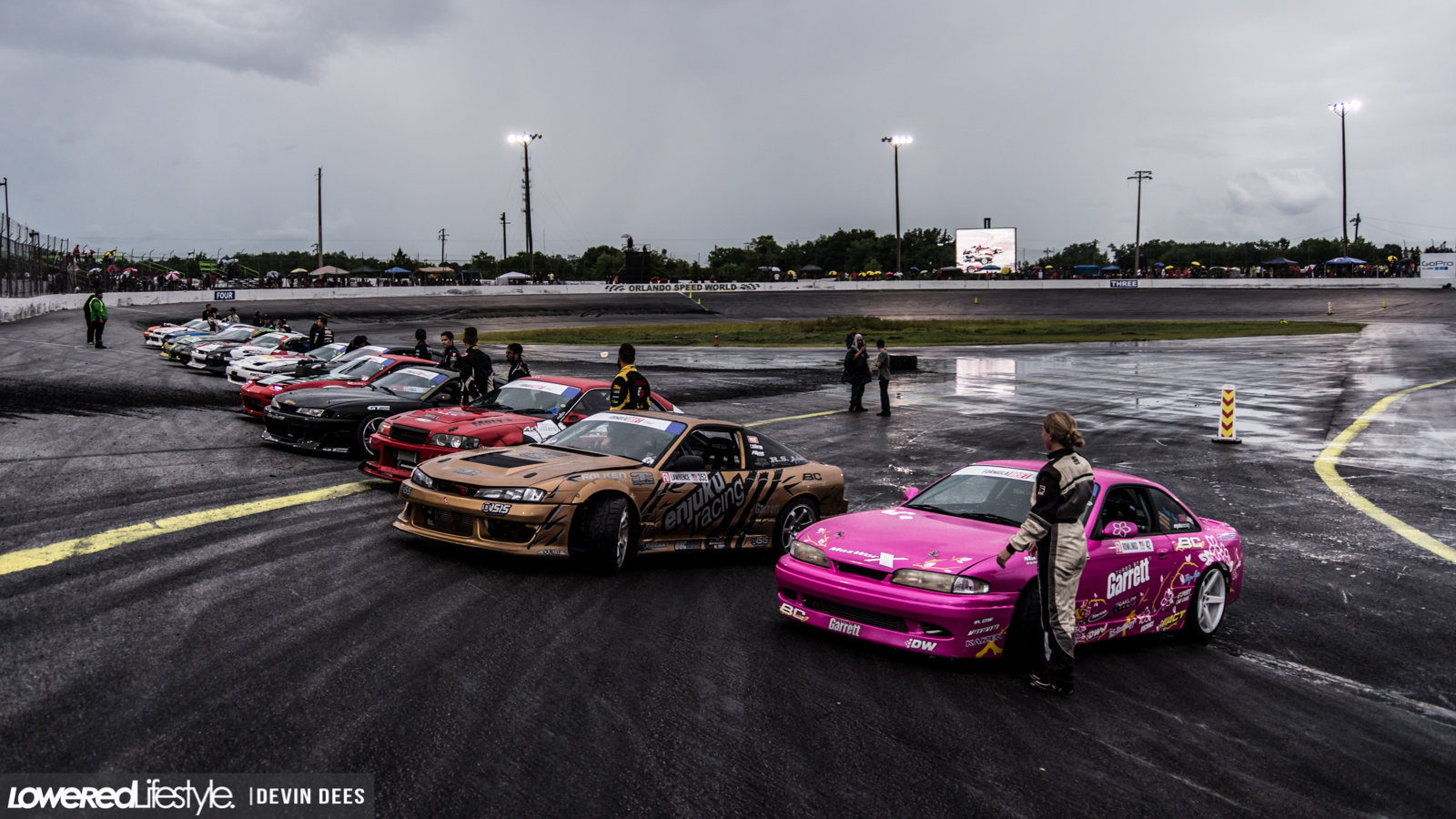 That being said, this group came prepared. 34 competitors showed up in Florida to qualify for just 16 spots! This made for an intense qualifying session. Friday looked quite promising with Alex Heilbrunn qualifying in first place in his supercharged Ford powered E46 BMW and local driver Kelsey Rowlings rounding out the field at number sixteen. 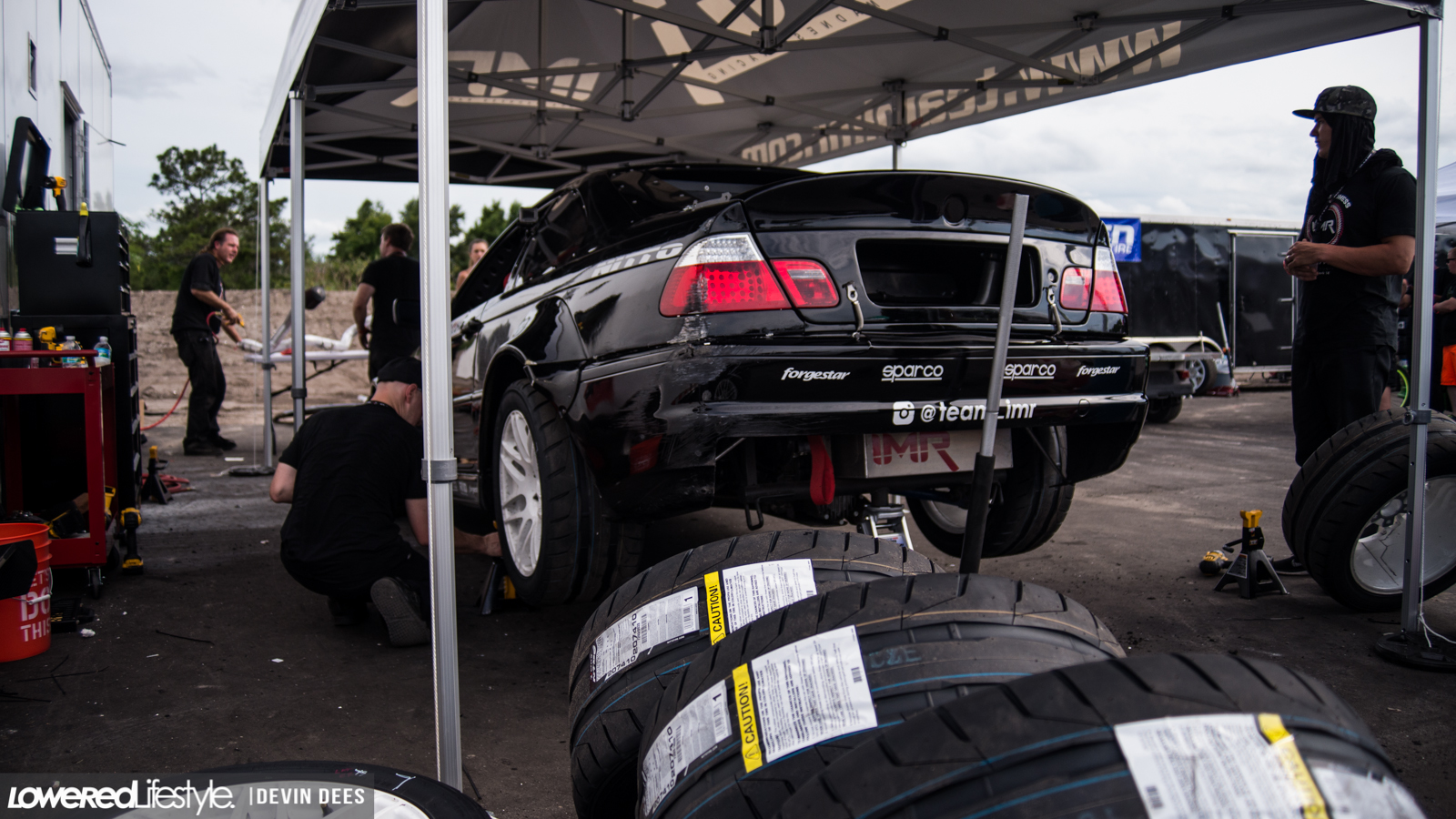 This was after Kelsey broke a rocker arm during a practice run; luckily Mazworx, who provided the turbocharged SR22, was just down the road from the track and able to get the Nissan 240SX back in the race. 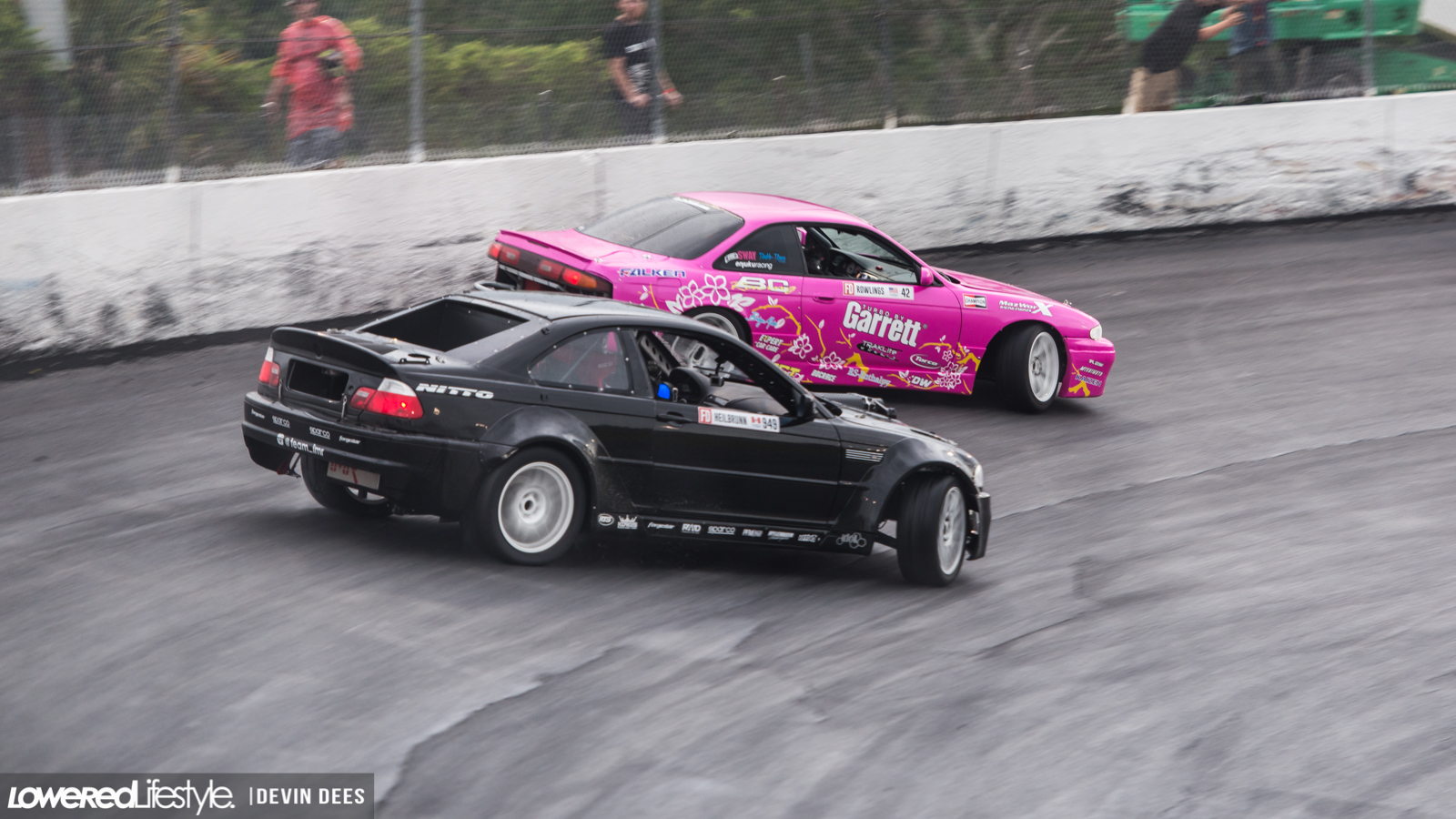 Just as we were preparing to watch the competition, mother nature barged in as she so often does and drenched the track… a foreshadowing of conditions for Saturday’s main event. The mood of the crowd darkened as they assumed the change in weather would make for a boring show, but the first two to hit the wet track were determined to lift spirits and prove them all wrong. Jeff Wolfson attacked the bank in his lead run against Ryan Litteral’s RB25 powered 240SX, making contact with the wall in his Scion FRS, but kept his composure to complete his run and ultimately win the match up. 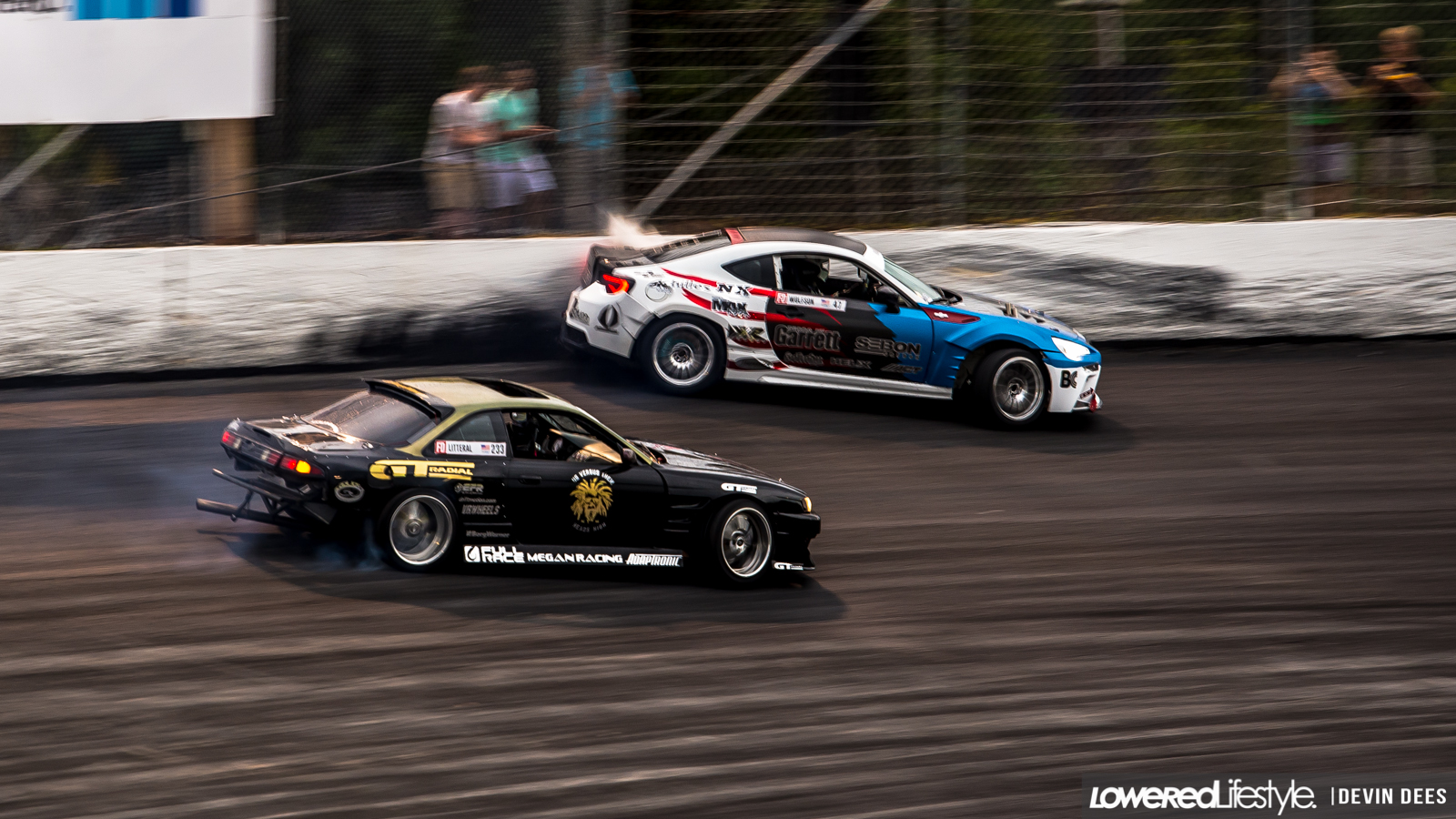 The great 8 showed no signs of slowing down. The banking dried quickly, making the transition into what we would later call “No Man’s Land” no easy task. The bump in the transition, still wet from rain, would be the cause of a few drivers’ undoing. As the sun began to set, two drivers in particular began to shine.. Andy Gray drove his Toyota Chaser like his life depended on it. 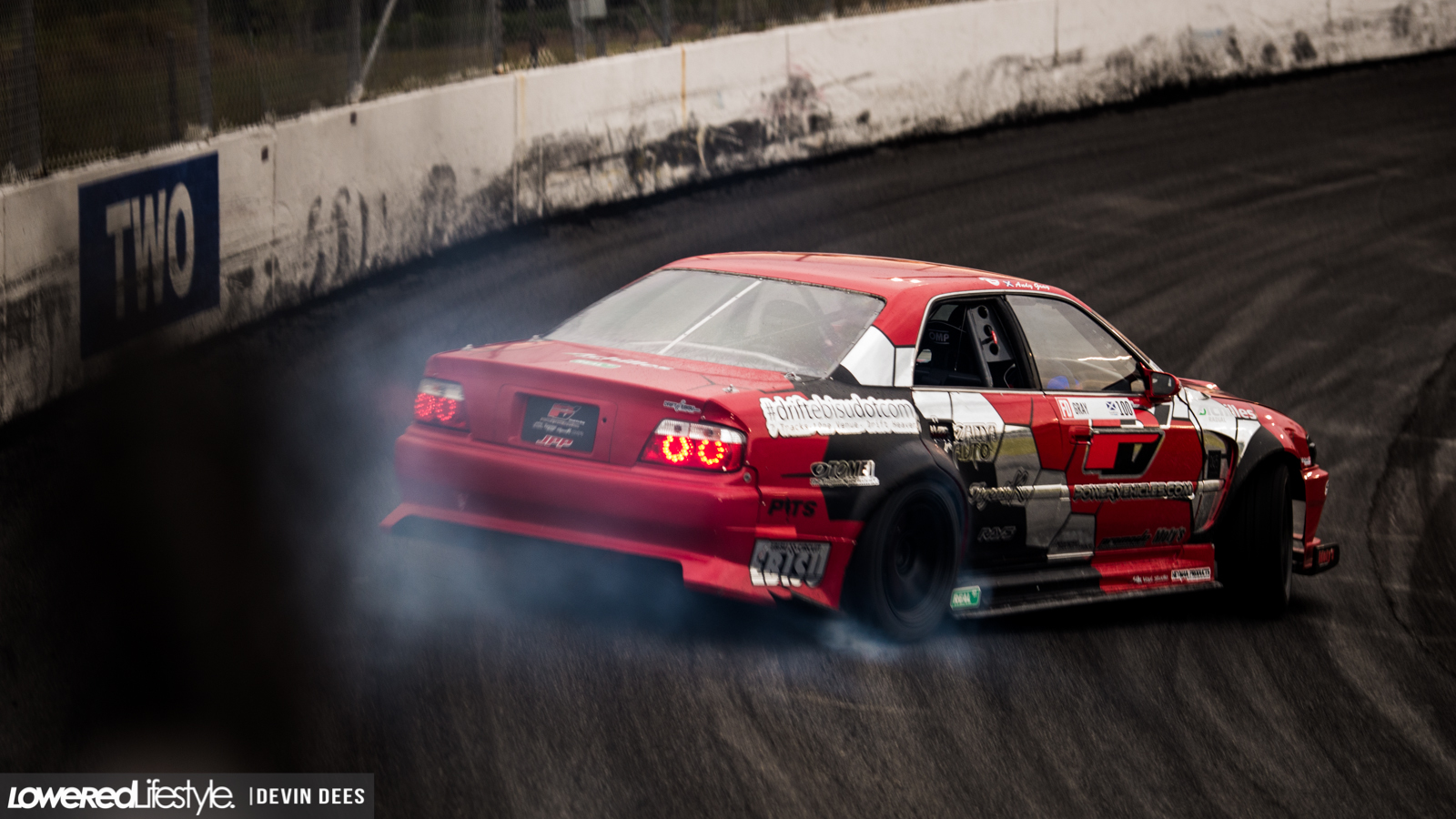 This 2JZ powered super saloon made 700HP right off the boat from Japan, making it one of our favorite cars in the series. Andy’s ability to follow and anticipate the lead driver was incredible, but the real star of the show was Alex Heilbrunn. 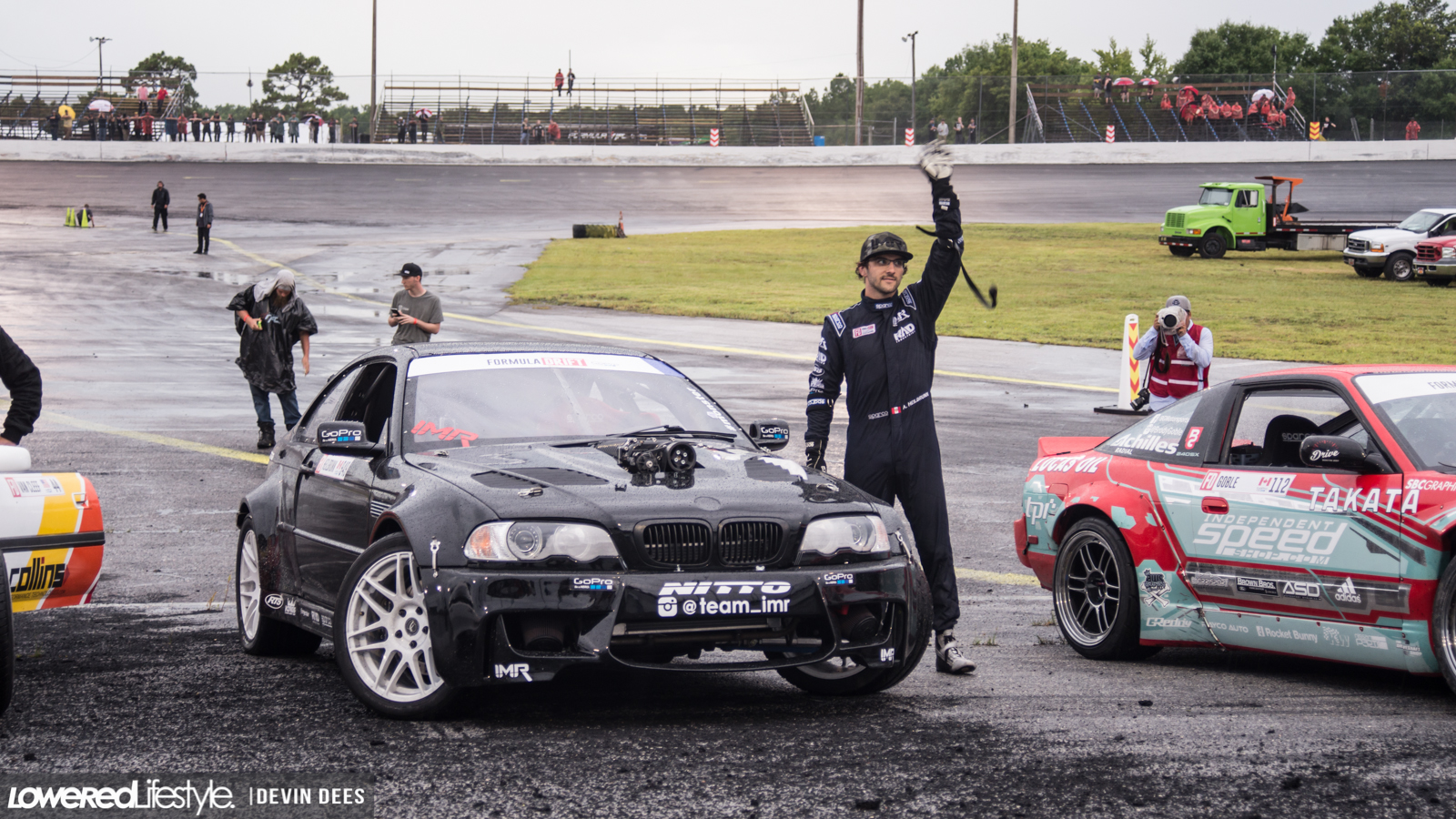 Alex completed a perfect event, qualifying in first place and finishing out on top in the finals over Gray. Whispers throughout the crowd suggested that these two could be competitive at the Pro 1 level, we’re inclined to agree. Keep your eye on these two – we have a feeling that this isn’t the last we’ll be seeing of either of them. 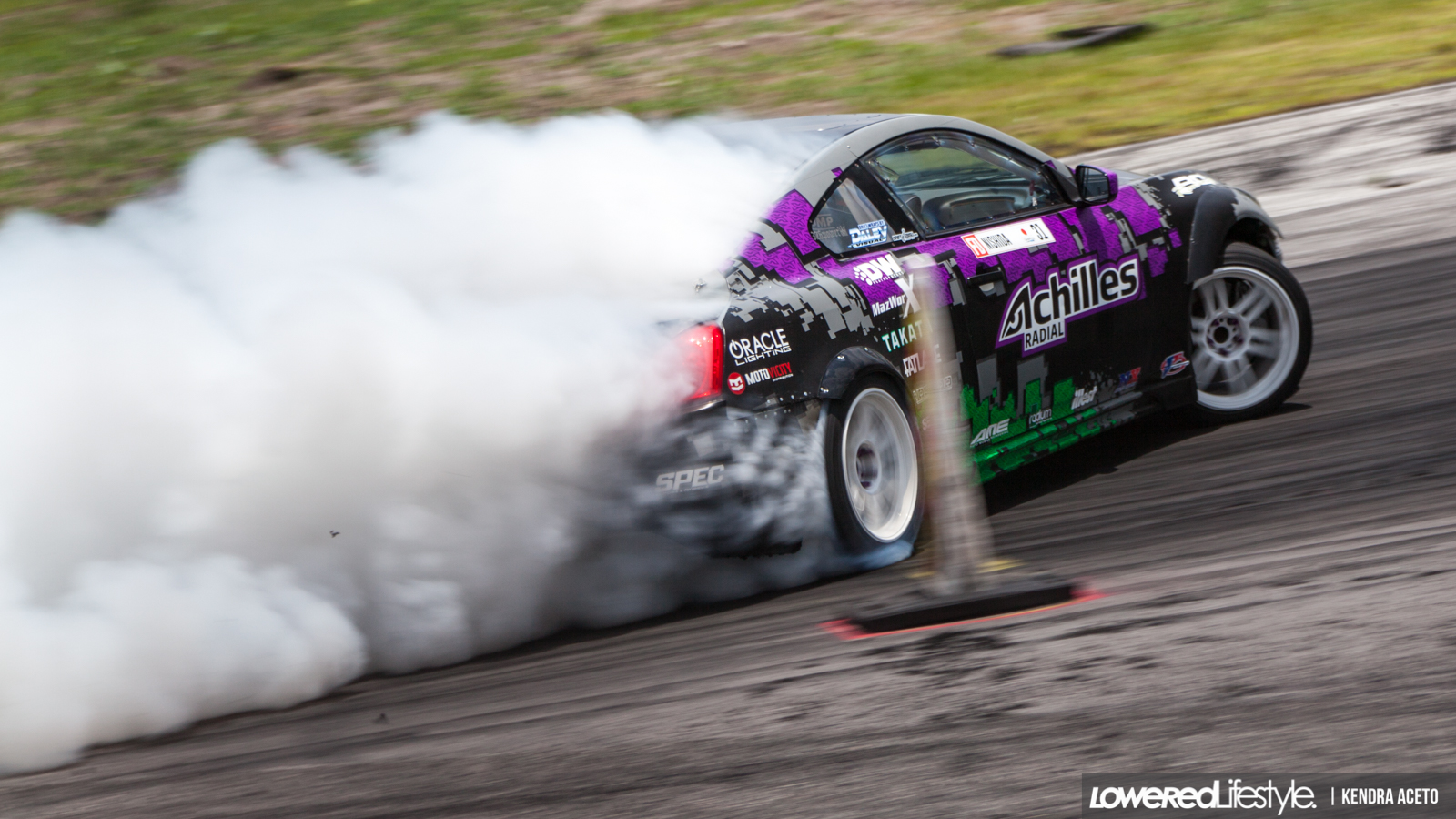 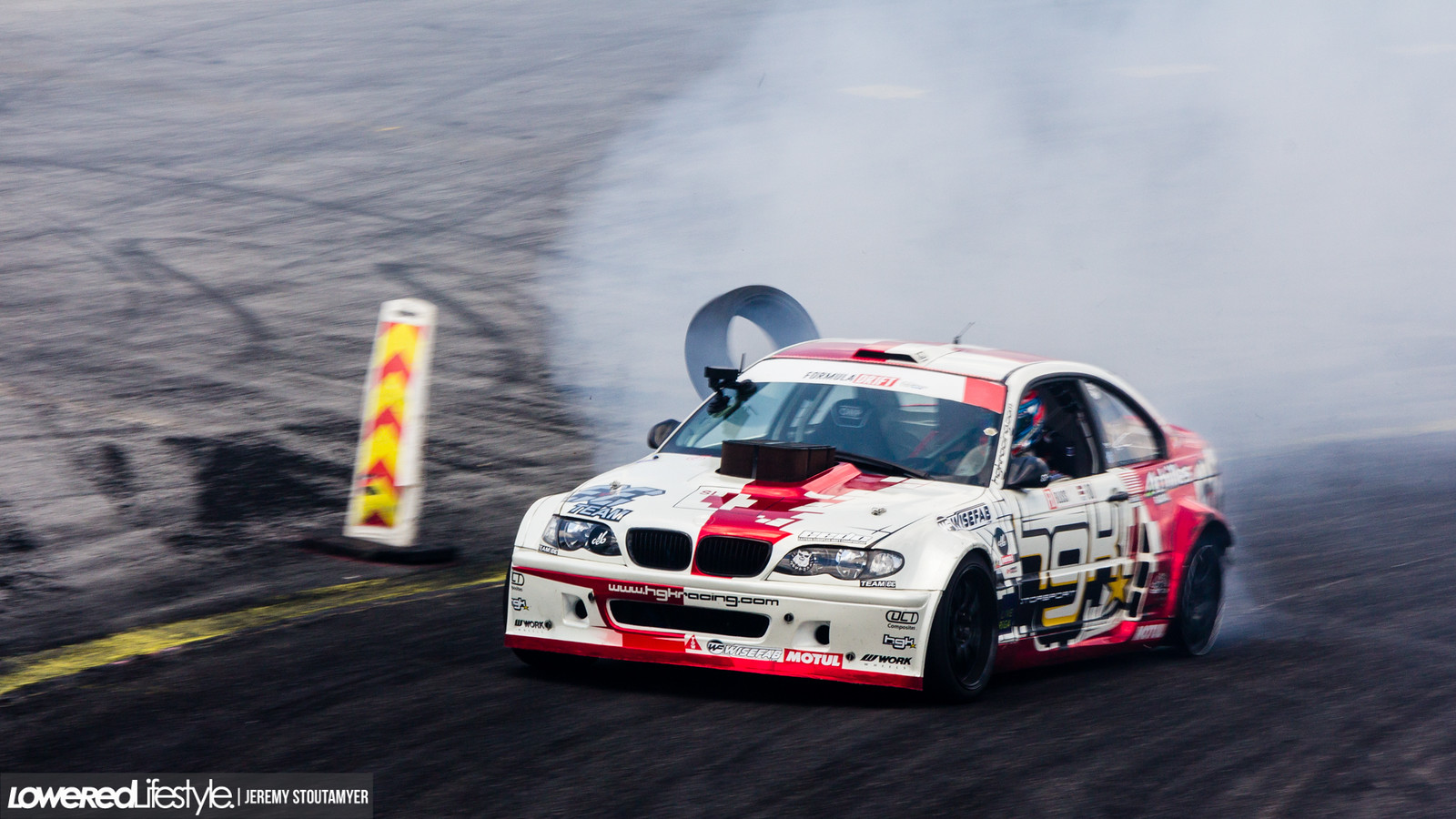 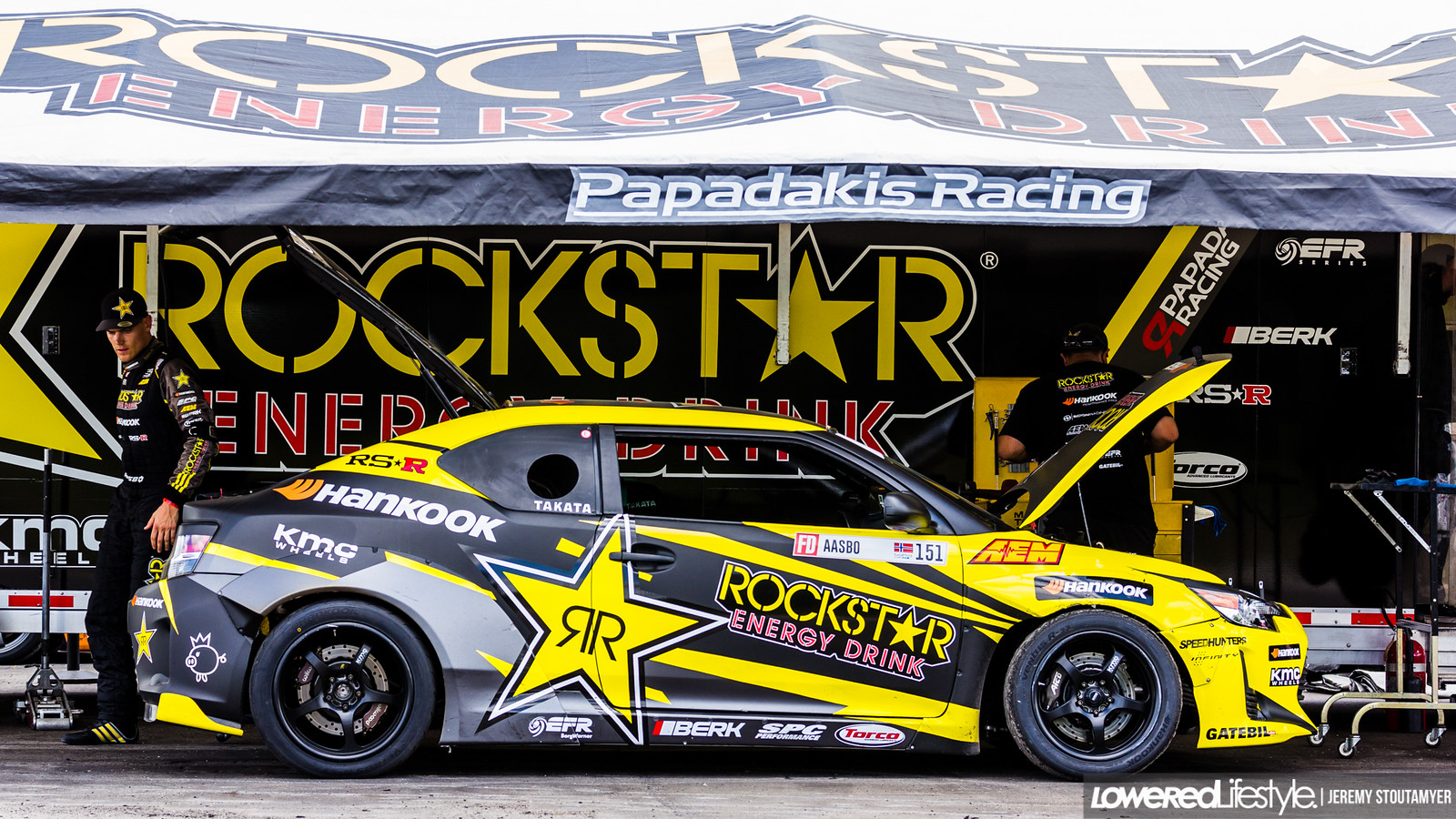 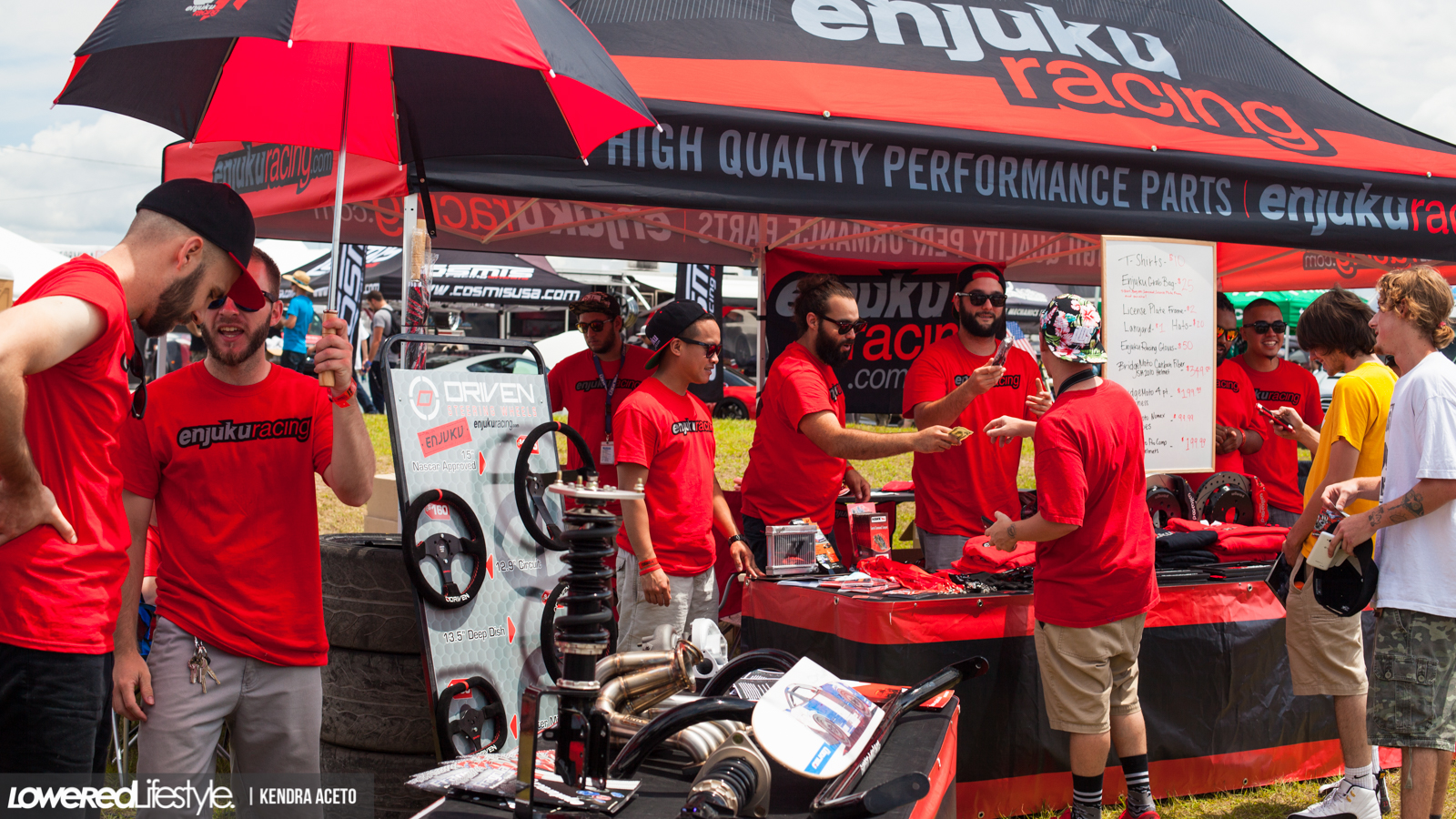 Living in Florida, you learn to expect the unexpected when it comes to weather conditions. Just like at Friday’s Pro 2 race, The weather took a turn for the worst as it came down to the last few tandems of Formula Drift’s Pro Series. Lucky for us, local sponsor Enjuku Racing profited off of their forward thinking and came prepared with $1 ponchos for sale to keep those of us dry who didn’t bring or buy an umbrella. To account for the drastically changing weather conditions, drivers were each given one practice run on the wet track before the tandem that would ultimately determine their standing in the competition. Many drivers spun out in the center of the track, deemed “No Man’s Land” by FD announcer Jarod DeAnda. 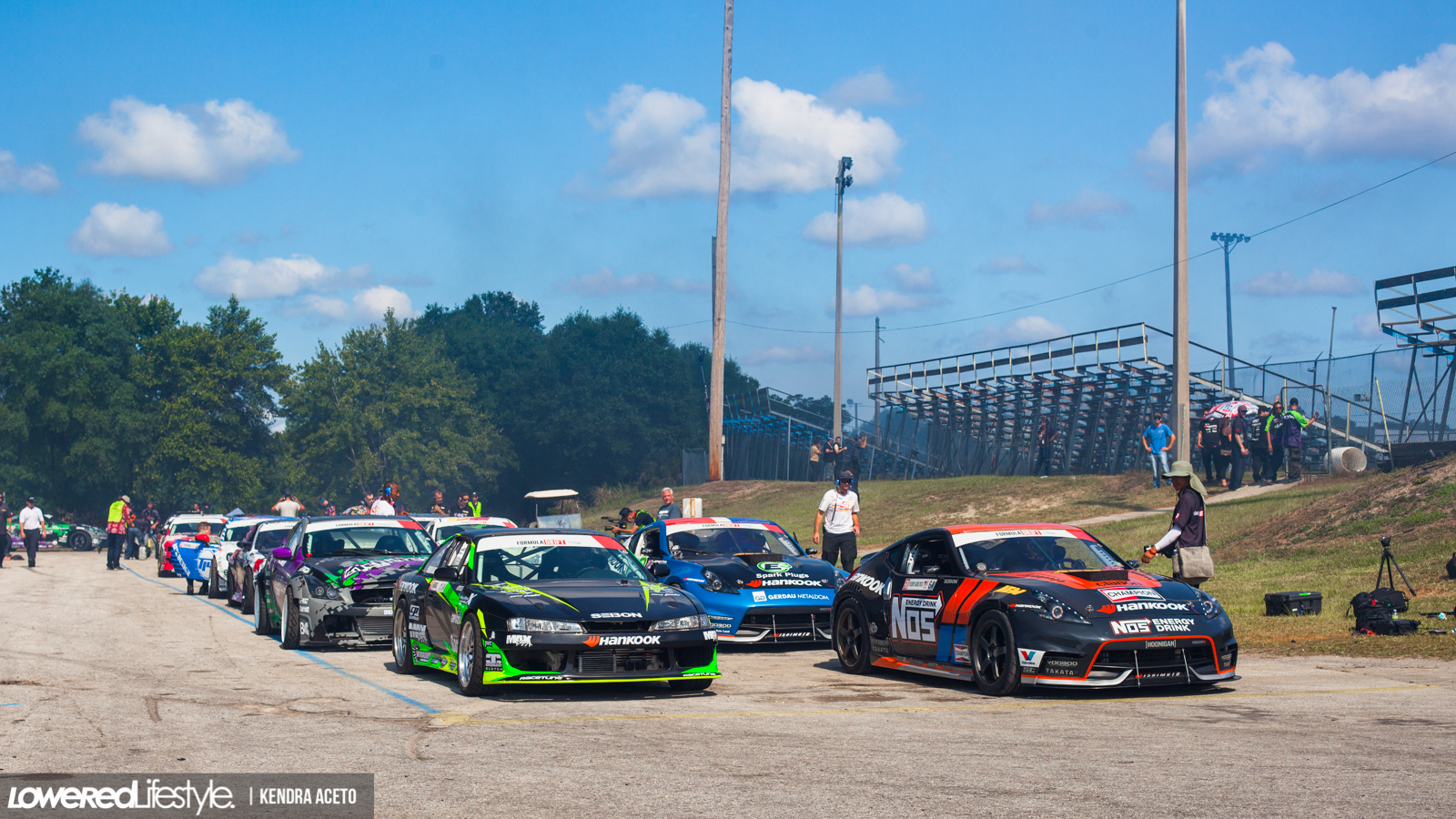 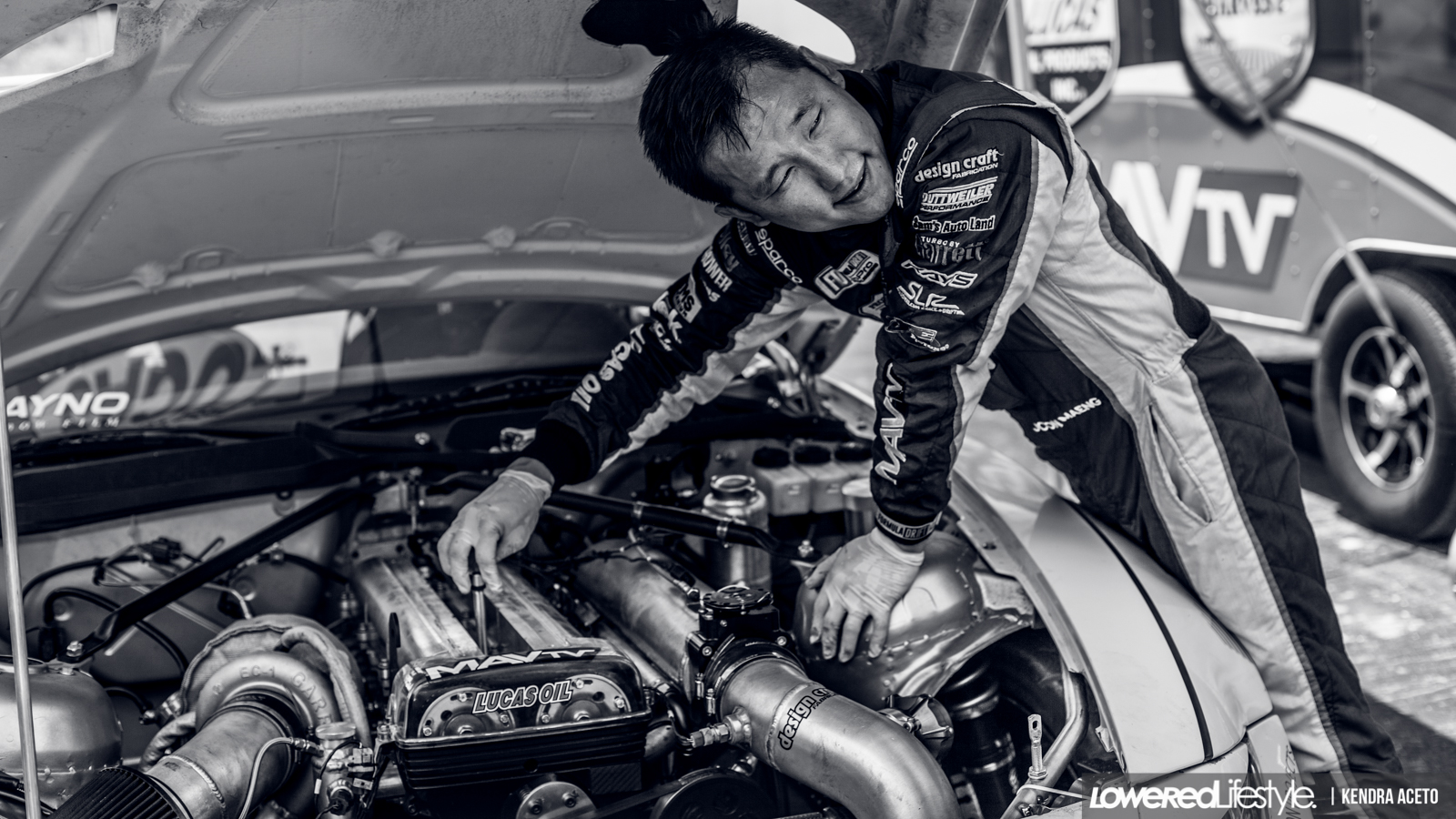 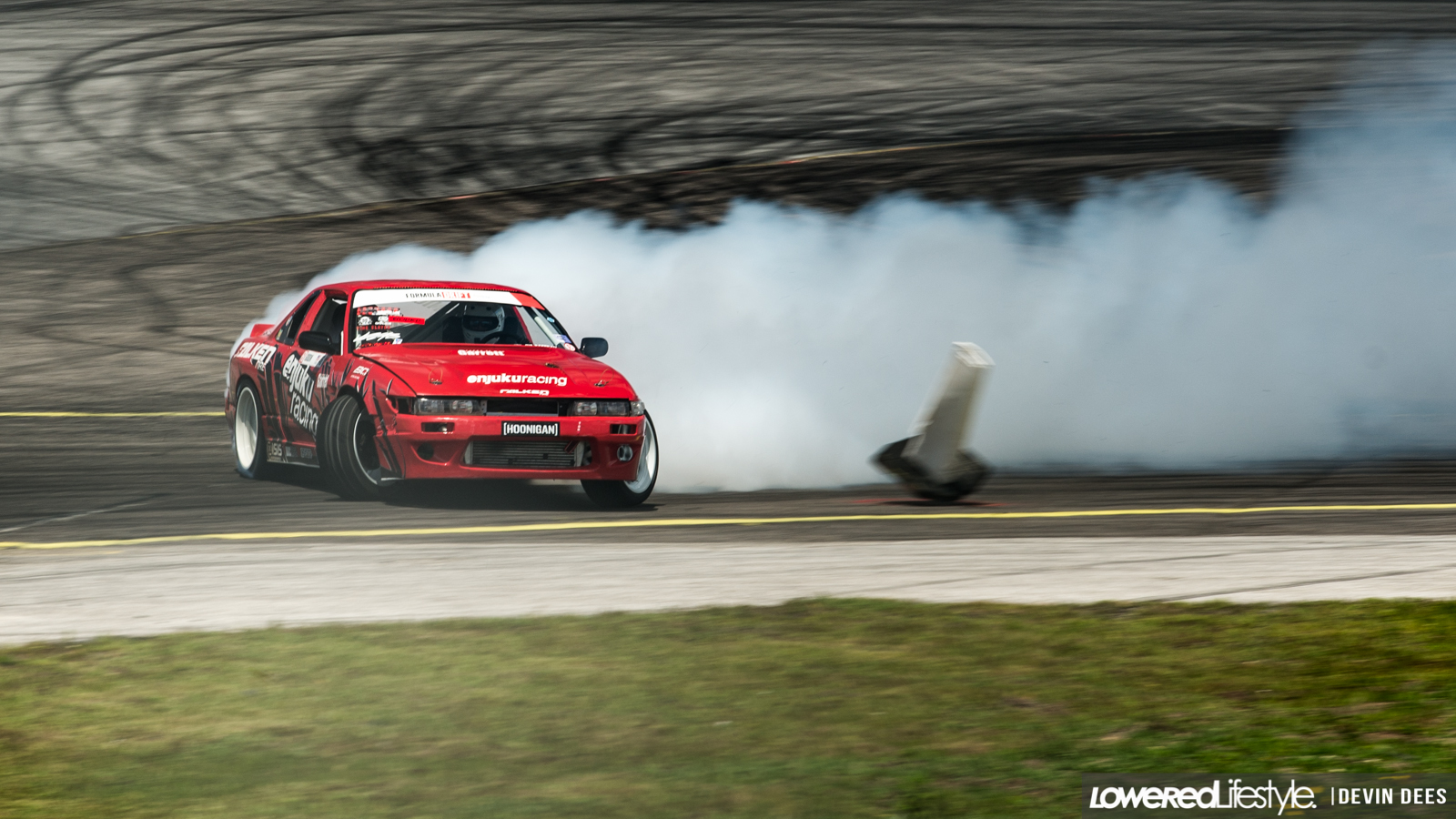 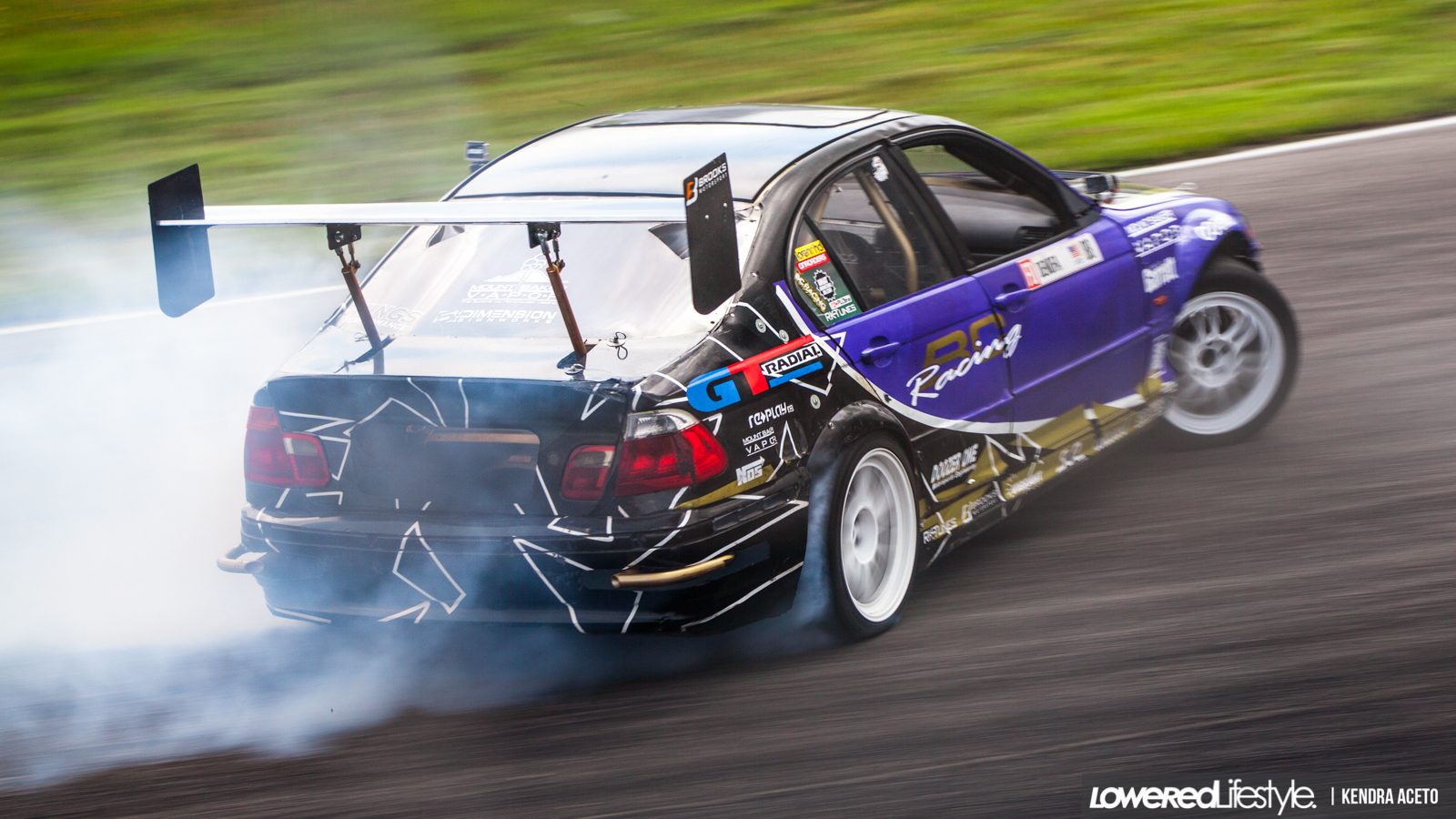 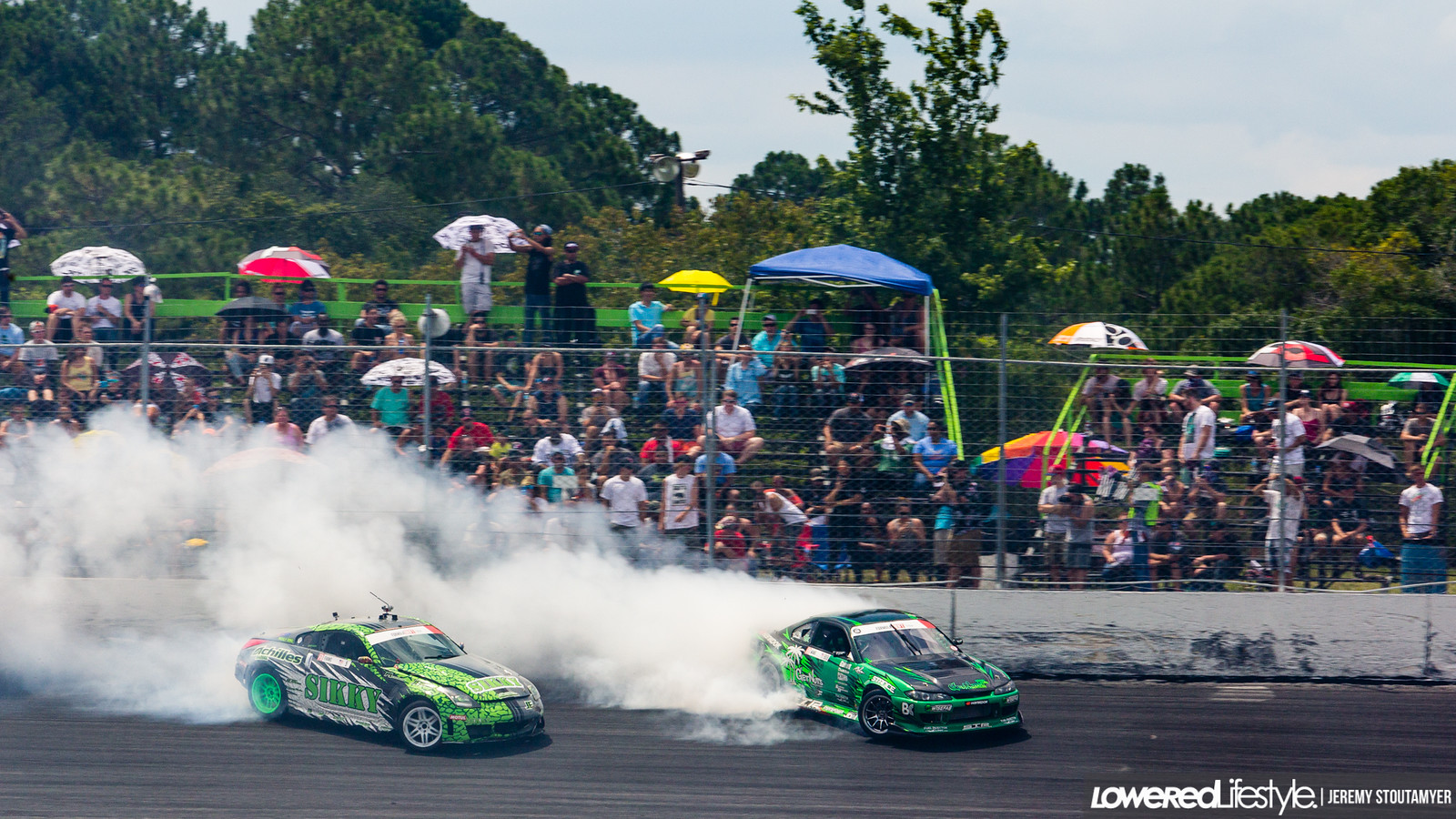 This “No Man’s Land” was where the action heated up – quite literally – during the Great Eight competition. Even during dry conditions drivers found themselves catching air or sliding sideways, but in the wrong direction. Rookie driver Masashi Yokoi advanced to the Top 8 before his S15 caught fire in No Man’s Land. His team was able to make repairs in time to get him back on track for his lead run against Ryan Tuerck, but unfortunately it wasn’t enough for him to advance further. 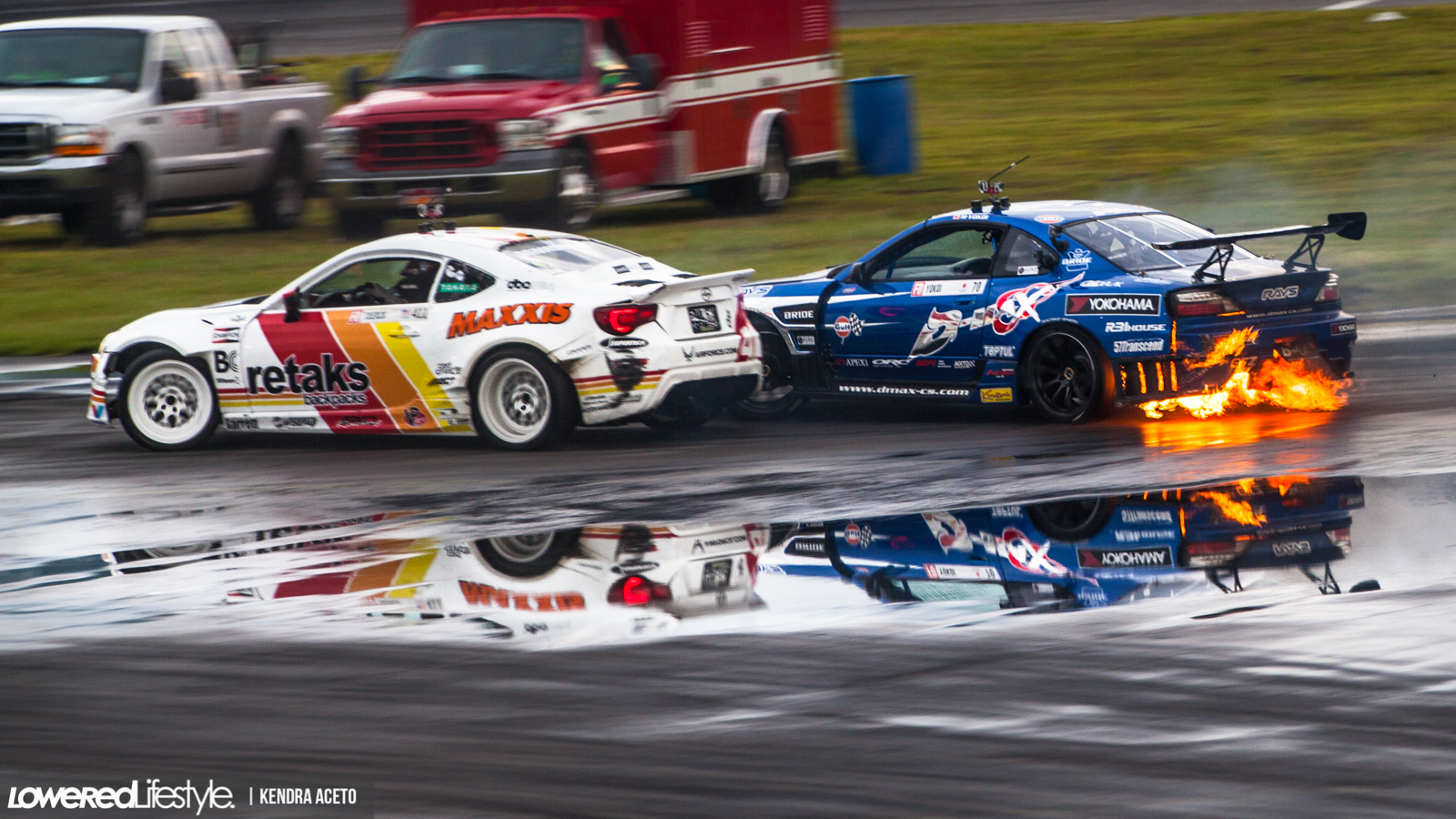 Another rising star in FD is driver Matt Field. He’s not afraid to push his S14 to its absolute limits, and he shows improvement every time he puts tire to pavement. He was knocked out of the Final Four by Tuerck, but we are confident that it is only a matter of time before he finds himself on the podium. 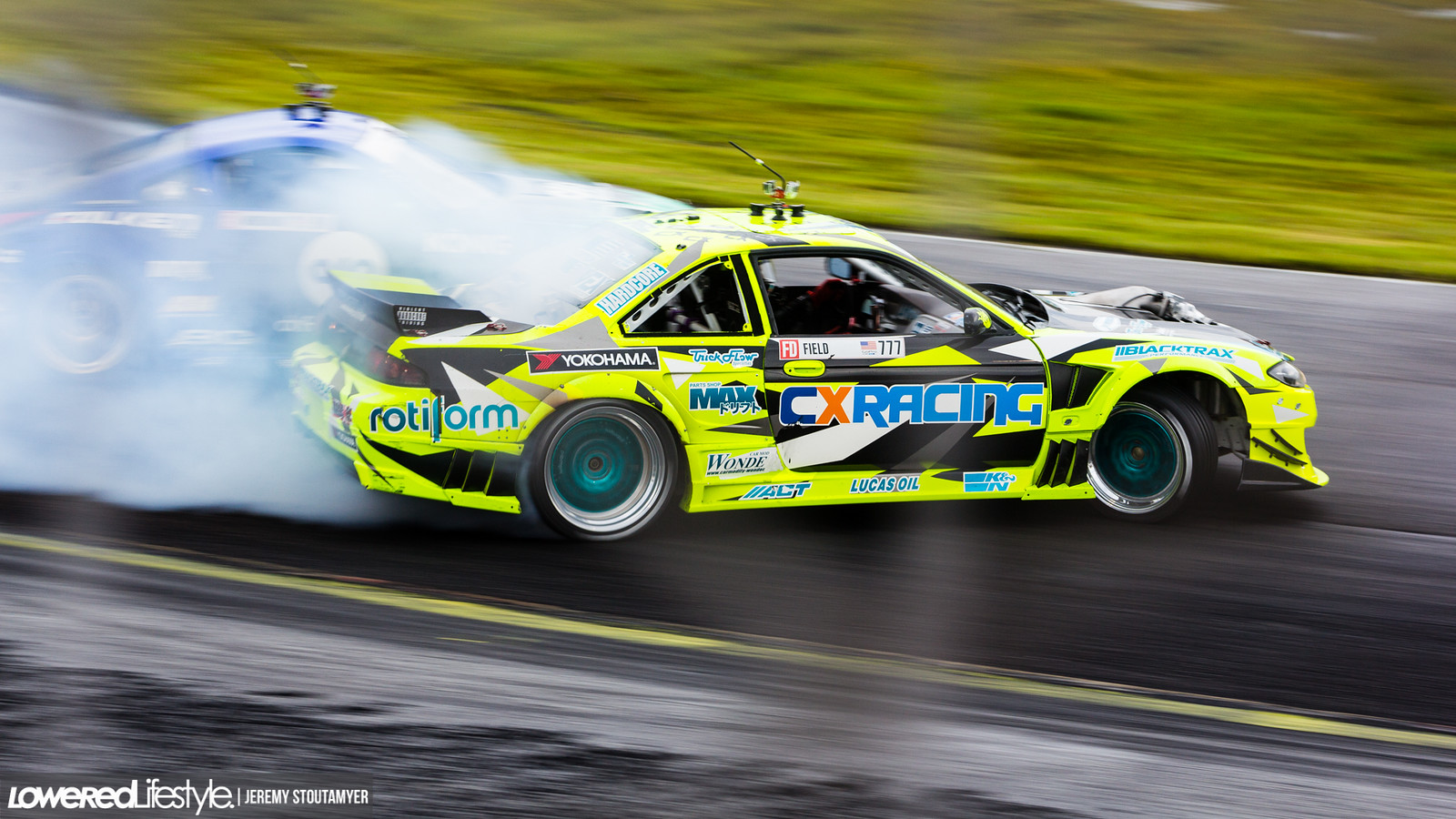 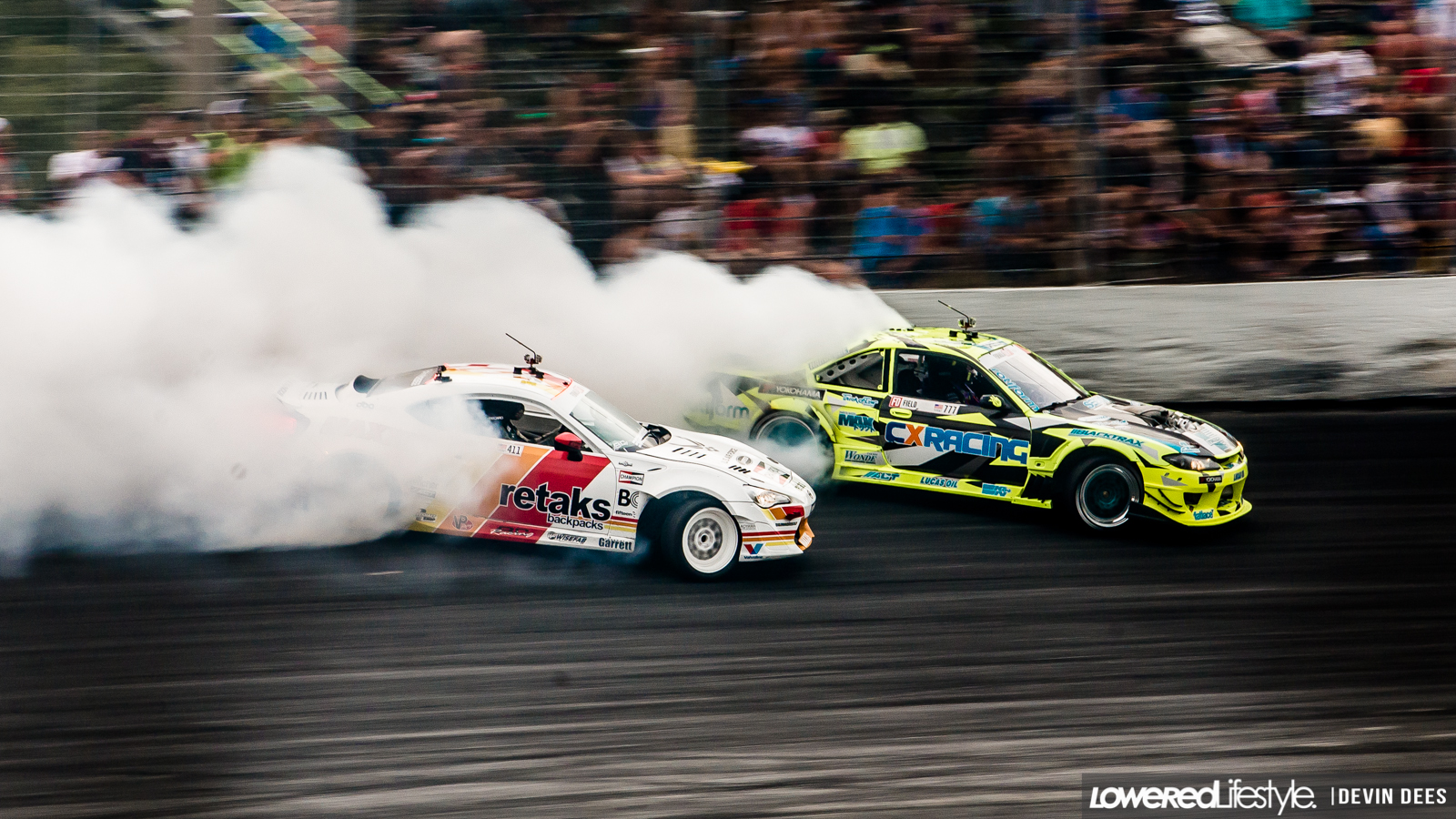 After taking out Vaughn Gittin Jr., Chris Forsberg found himself in a fiery battle against Ken Gushi in his FR-S – a chassis that has gained traction crazy fast in the drifting world. The platform is also currently being used by previous FD winner Fredric Aasbo as well as Ryan Tuerck, who would ultimately take the win here in Orlando. While chasing Forsberg and coming around the first turn into No Man’s Land, Gushi failed to initiate his drift in line with Forsberg causing their front ends to collide, then their rear ends, and flames shot out the back of Forsberg’s 370Z. Because of this mistake, Forsberg advanced to the final battle leaving Gushi in third place. 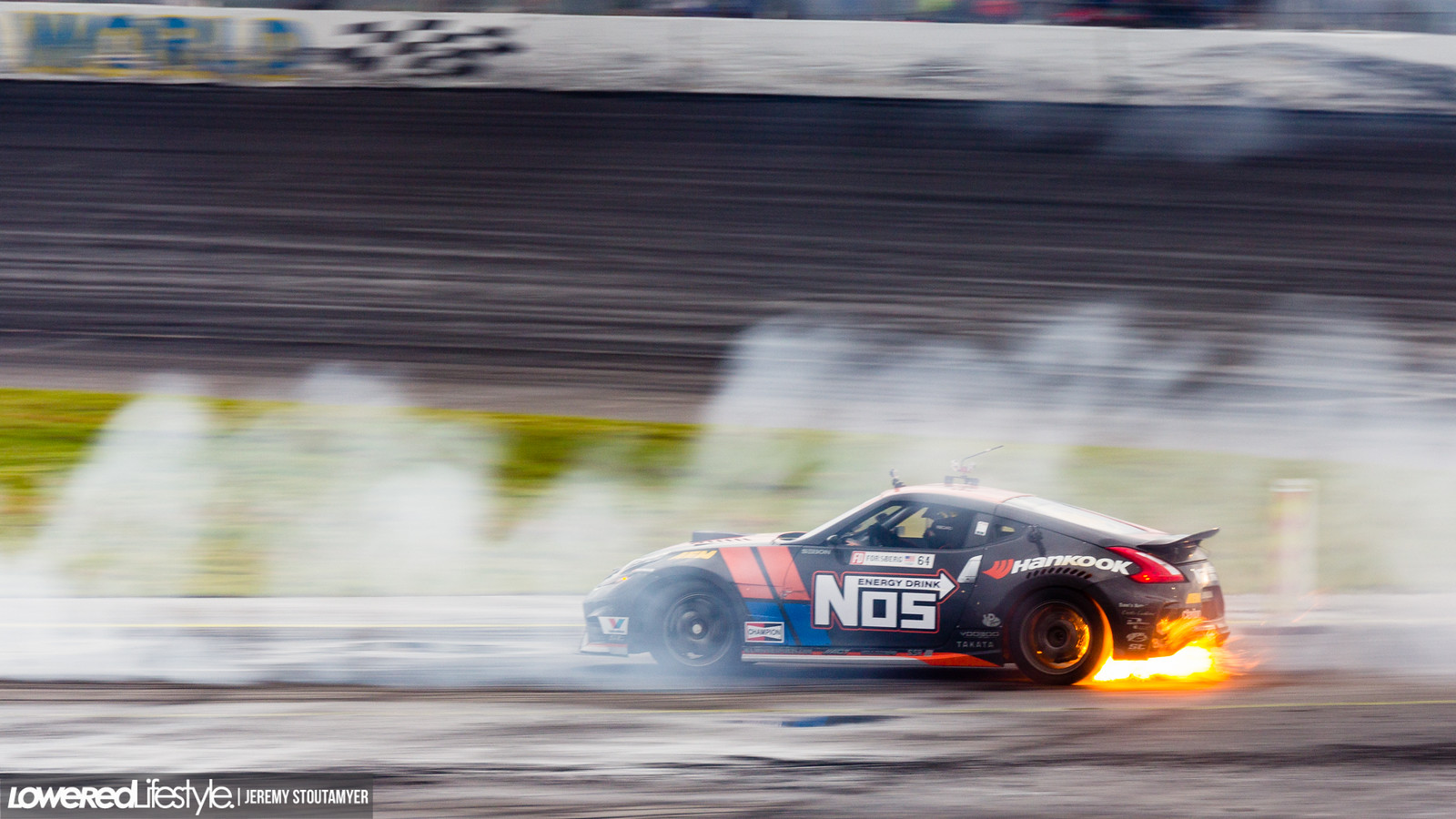 With his teammates yelling “Fire!” Forsberg made the decision to be safe rather than sorry and engage the fire suppression system after his tandem with Gushi, however, the fire turned out to be nothing more than a large backfire and the suppression system caused damage to the engine. The team was unable to get the car to start in time for his final battle against Ryan Tuerck. It wasn’t the most exciting way to win, but because Forsberg couldn’t get his car back on track, Tuerk took first place with Forsberg in second and Gushi in third. 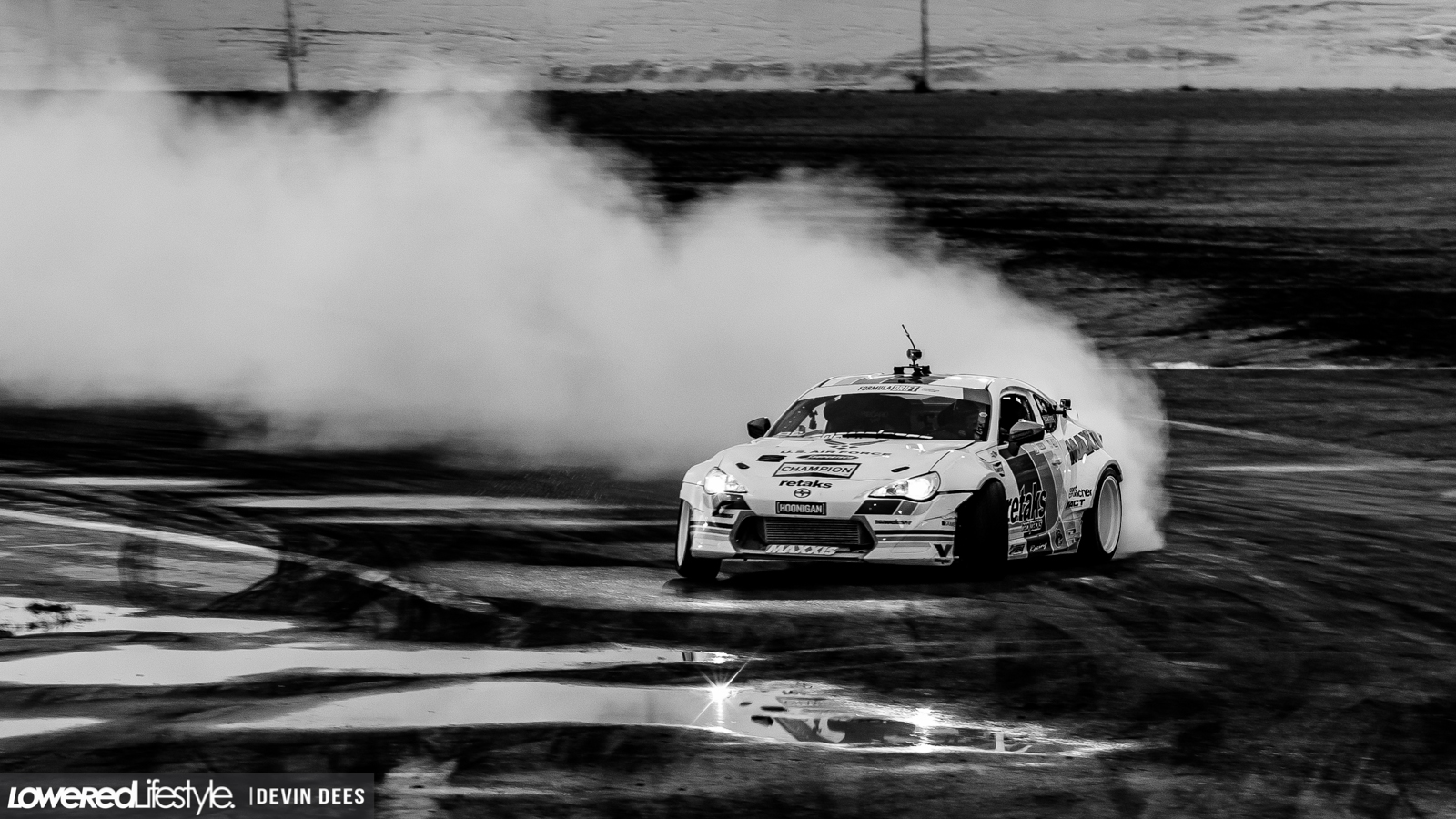 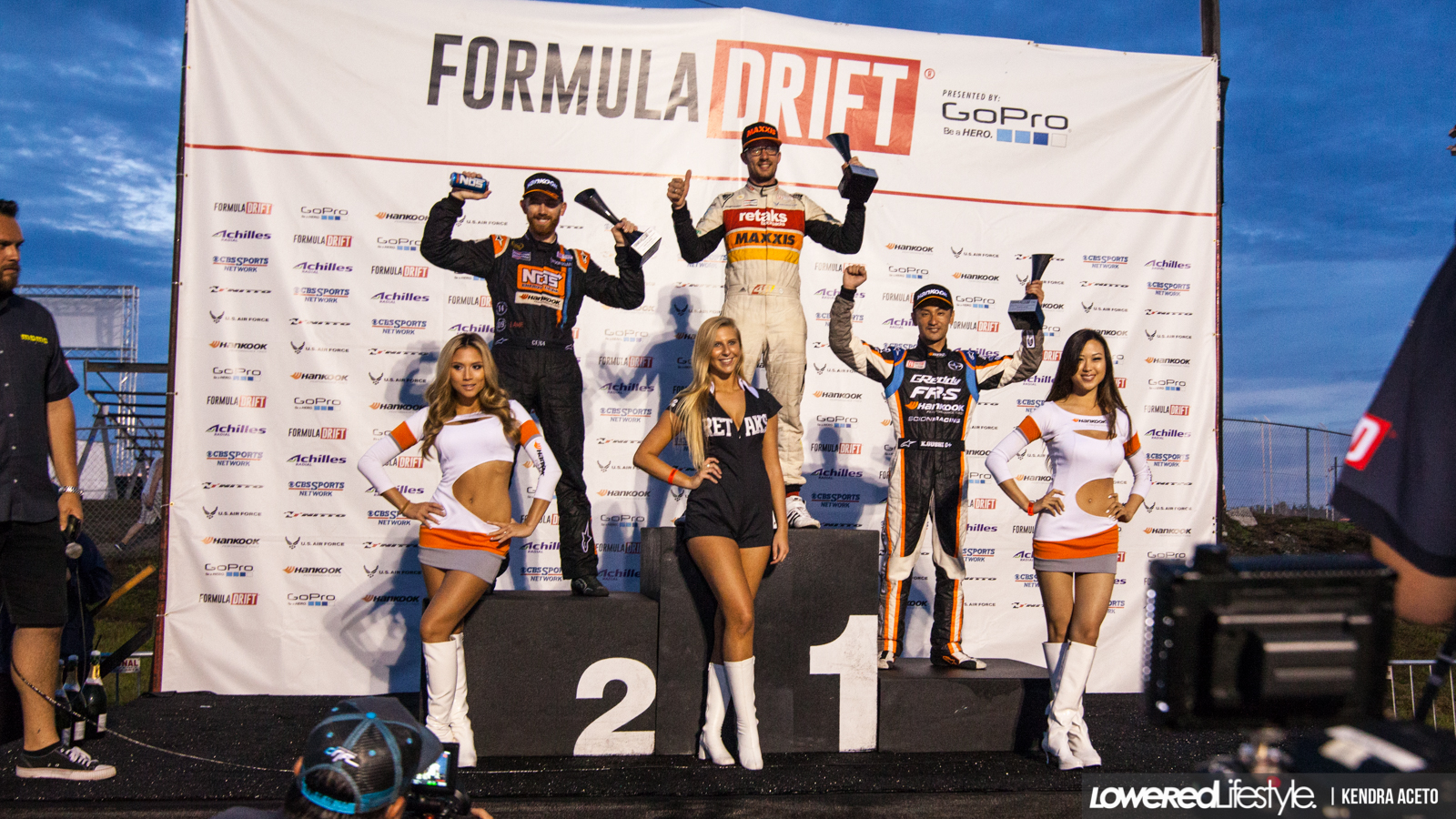 Next month, Formula Drift travels to a crowd favorite venue in New Jersey, The Wall. With Odi Bachkis getting knocked out early in Round 3 followed by a win for Tuerck, the battle for first in points is heating up! 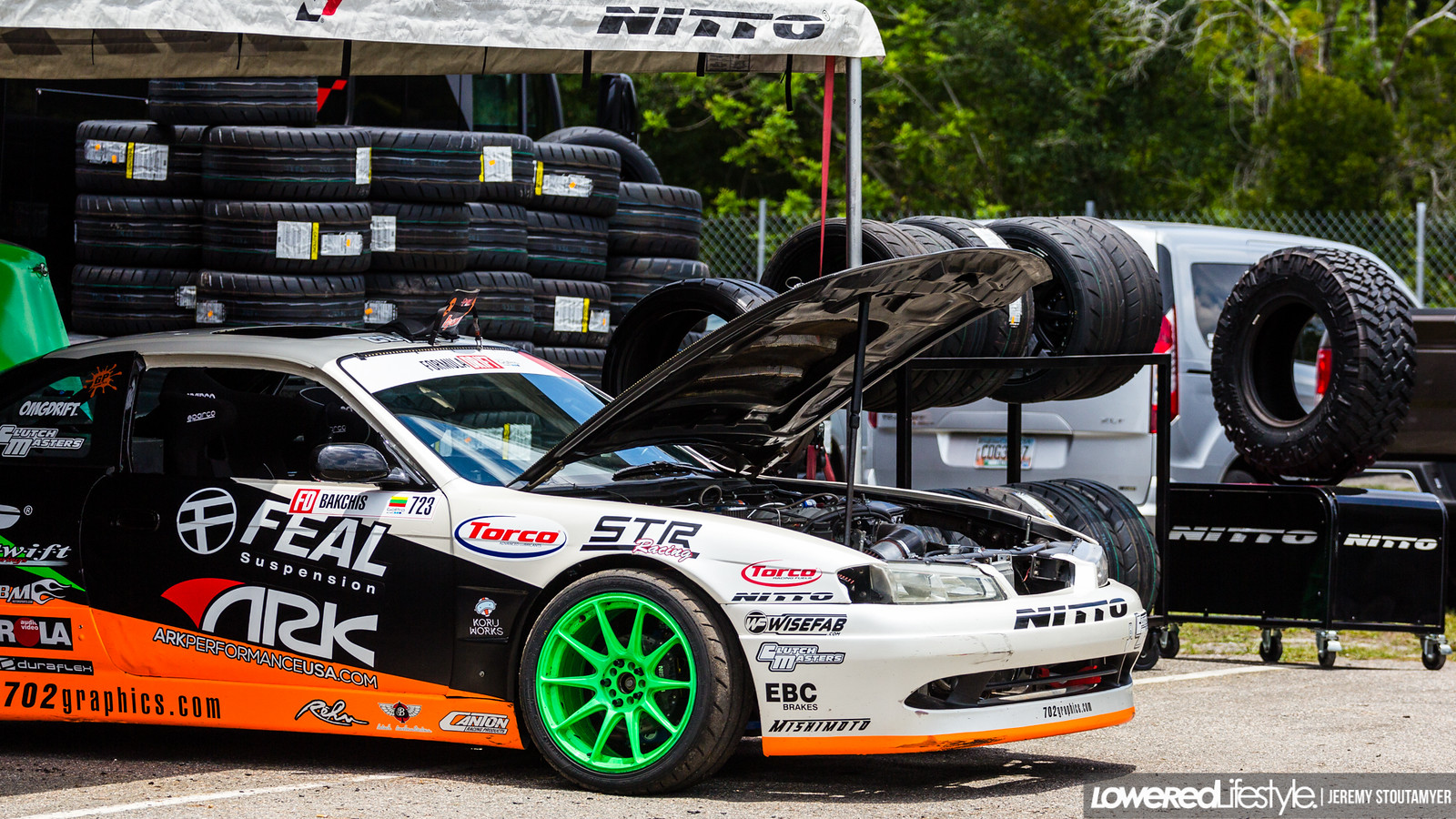 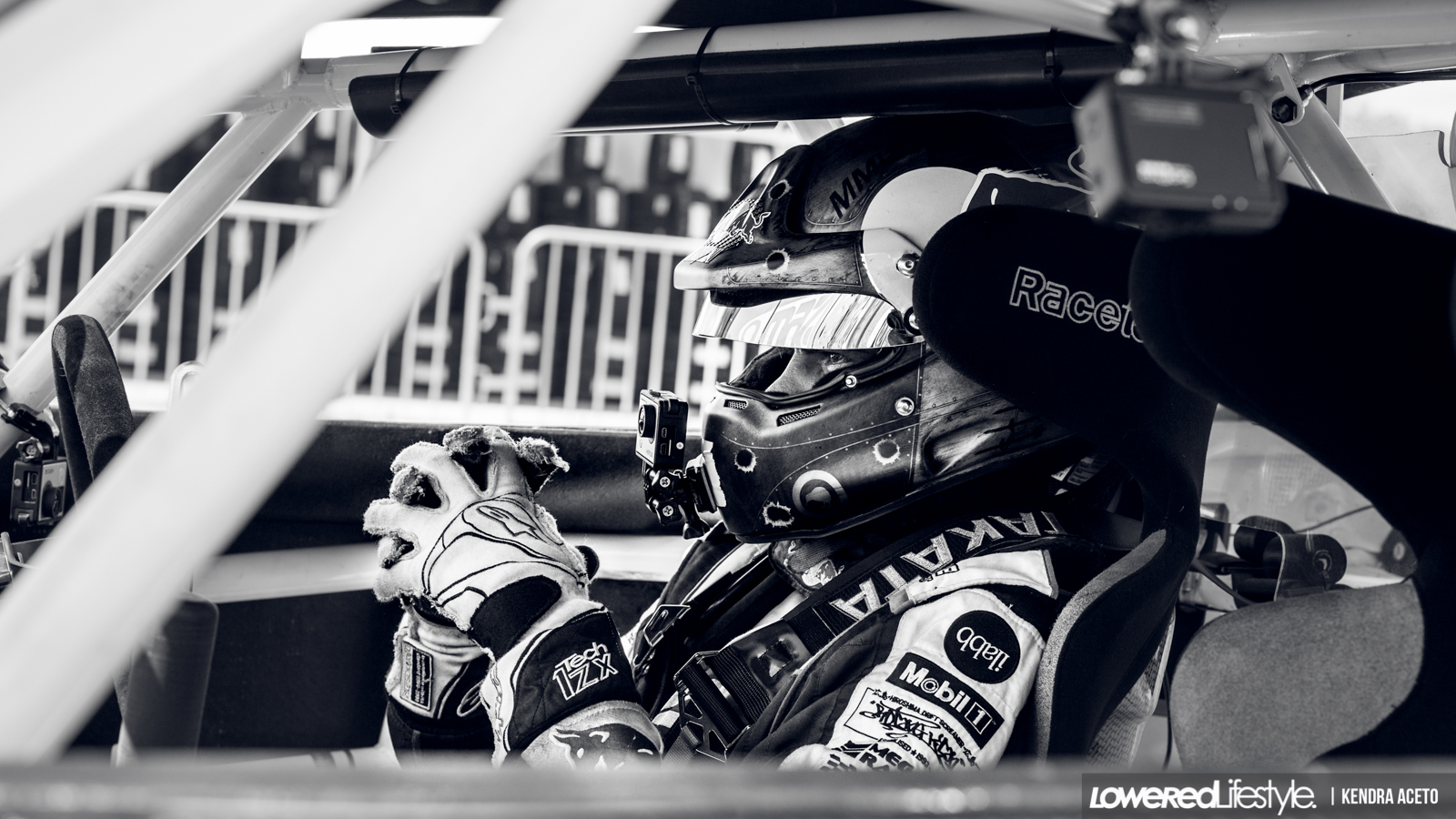 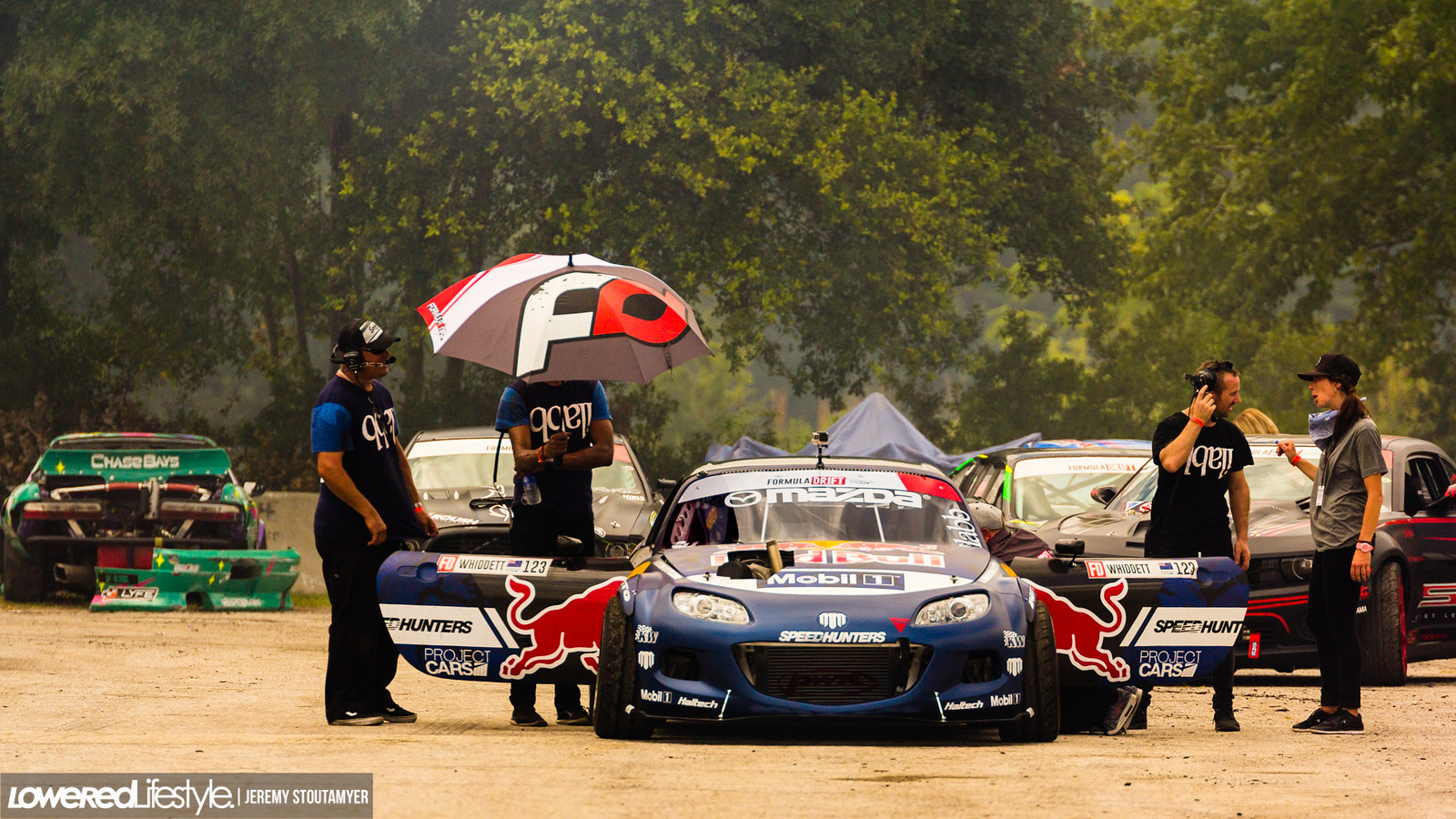