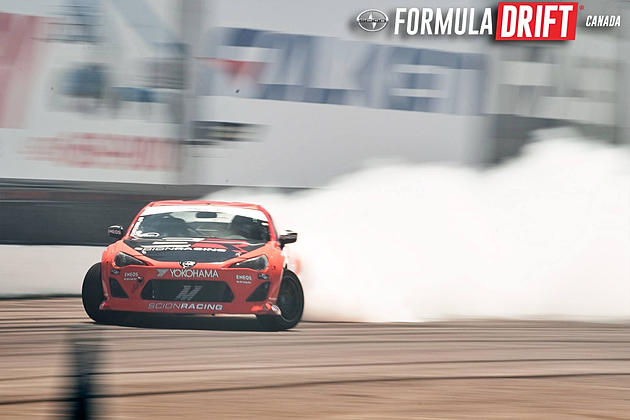 There was a lot of doubt in the air with dark clouds, heavy rains, and thunderstorms looming at the horizon.  Nobody had any idea what to expect.  All options were on the table: cancel the event, re-schedule, or modify the existing schedule. Finally, the organizers decided to leave everything as is. In the end, those who kept the faith got rewarded with one of the most exciting drift competition to ever take place in Canada. 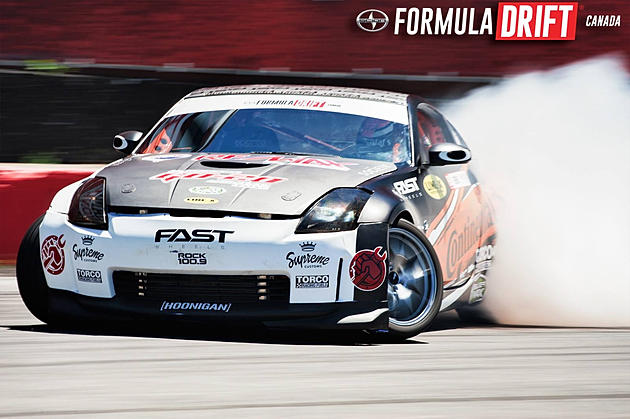 Practices
As soon as practice started we knew we were dealing with a whole new level of competition says Haig Kanadjian, one the the three judges of the event. For the first time at l’Autodrome St-Eustache, the first clipping point was set-up right at the entrance of the track. It was impressive since judges and spectators alike could not see the cars accelerate from behind the grandstands until they would suddenly appear on track at speeds hovering around 125 – 130km/h, just seconds before initiating their first drift towards the first clipping point. 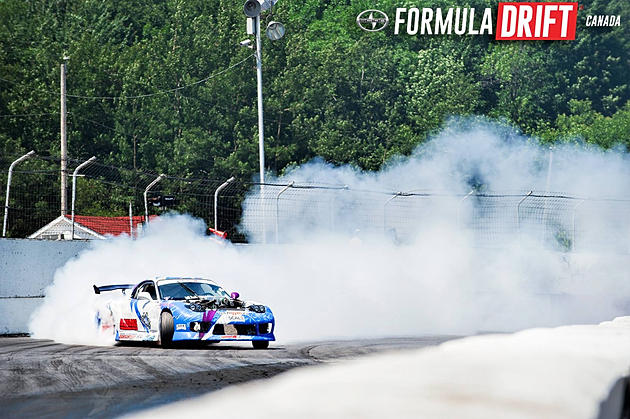 Francis Tassé was the driver who was able to hit the highest top speed during practice with 137 km/h on the clock. The new layout counted 6 clipping points; four interior clipping points and 2 exterior ones. Judges were also pleased to see that most drivers had the ability to complete the layout with fluidity and with minimal corrections. In fact, the little amount of accidents throughout the event spoke to that matter. 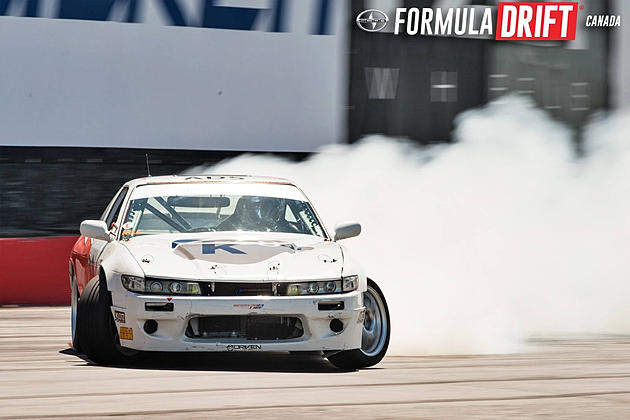 Qualifications
To judge this first event of the season, FD Canada retained the services of Haig Kanadjian and Kevin Grenier, two well- known Quebec drifters. There was also Brian Eggert, one of the 3 current FD judges. The workload between the 3 judges was divided into 3 sections:

In Brian’s case, the 30 points allocated for style were also sub-divided into 3 categories: global impact, fluidity, and engagement.

Kevin and Haig on the other hand broke down their first 25 points by six for each clipping point. The first 5 clipping points were given 4 points each and the last one 5 points, for a total of 25 points.  As for the 10 points allocated for style, each of the two judges would look at one specific area of the track.  In Haig’s case, he focused on the very first clipping point, ‘It’s an important moment because it often gives the tone to the rest of the lap’.  As for Kevin, he focused on the first outer clipping point at the back of the track, where drivers were expected to get as close as possible with their rear bumpers.  What is interesting is that 50% of the total score is given for style, a reminder that drifting is all about the show! 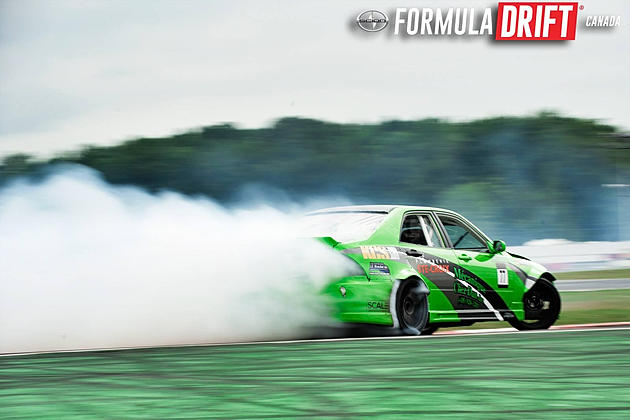 It was not long before the qualifications reflected the performances seen by the judges during practice. Jeff Laflamme marked the best score with a solid 92 points. ‘It was almost a perfect run. With Laflamme, we are always on the edge of our seats. We think he is about to spin out because he has so much angle but he manages to keep things under control,’ says Haig. 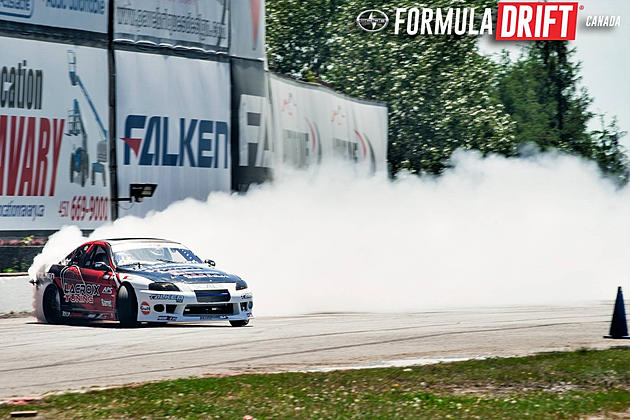 Jonathan Guitard placed second during qualifications. ‘Guitard seems to have benefited from the tips he got all weekend from veteran drifter Marco Santos,’ says Haig. 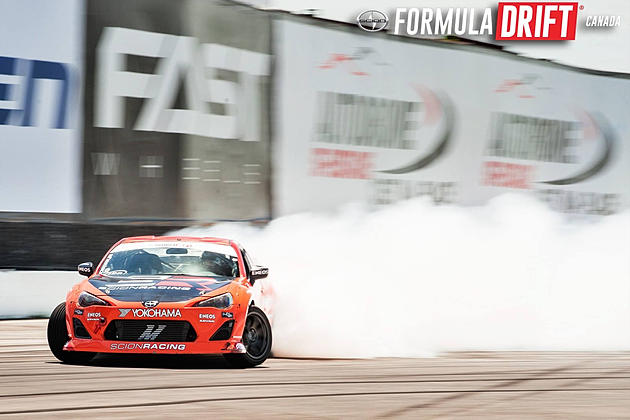 As for third place, it was taken by Scion driver Pat Cyr. ‘I think Pat runs one of the best tires on the market,’ explains Haig.  Combined with the power of his 2JZ, the lightweight of his car, and his talent and experience, Pat seems to have found a winning combination. In fact, Haig also believes that Scion FR-S drivers, such as Pat or Ryan Tuerck for example, took a few years to figure out the new chassis but have now found the recipe for success. 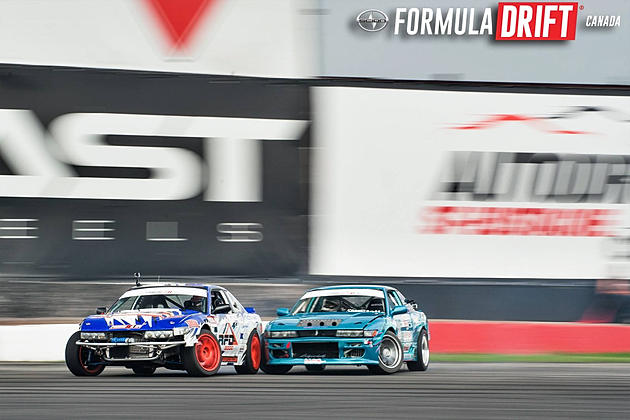 Top 16 started on the right foot.  First, the weather was holding out and all drivers got to run on the dry. Second, the Top 16 took shape into nail biting battles and tight races.  The judges had their work cut out.  There were several instances where they had to break down each decision, review the replays, and make tough calls. 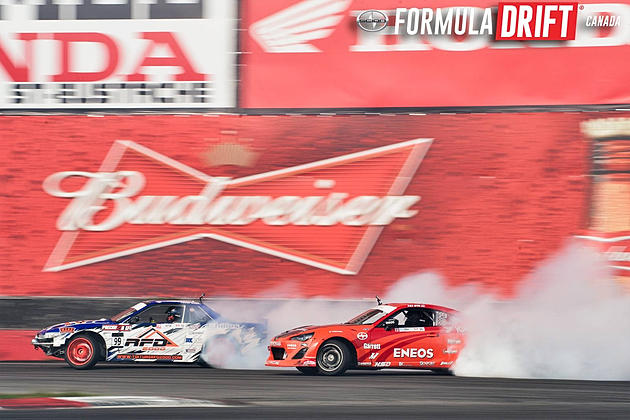 After many fierce battles, the crowd got rewarded with a picture perfect finale. Pat Cyr and Francis Doyon gave a great show. Pat showed a lot of consistency and Doyon had a lot of angle. In the end, Pat was able to leverage his talents as a ‘’chaser’’, keeping things real close to Doyon’s car.  Doyon on his end had a harder time keeping up with Pat’s Scion FR-S.  Although Pat lost a few points for hitting a cone, he still managed to come out on top. Haig does point out that Doyon is a rising star, ‘If he keeps doing what he is doing now, there is little doubt he will become one of the next stars of the show’. 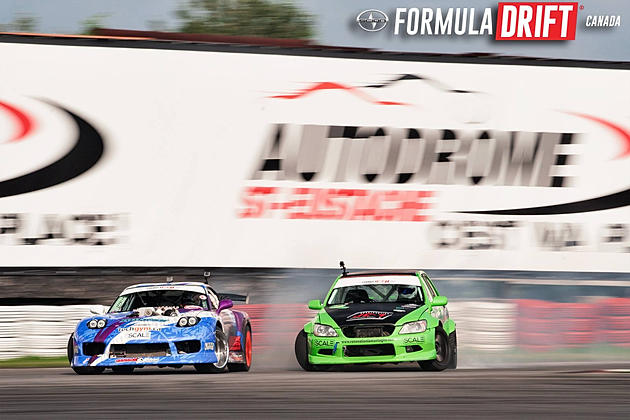 The other battle for a step on the podium pitched Francis Tassé against Jeff laflamme.  Laflamme who mastered his car all weekend lost control during the fight which gave the win to Tassé.  Since 3rd place is decided by comparing qualification scores (Doyon 77 – Laflamme 92), Laflamme took 3rd place. 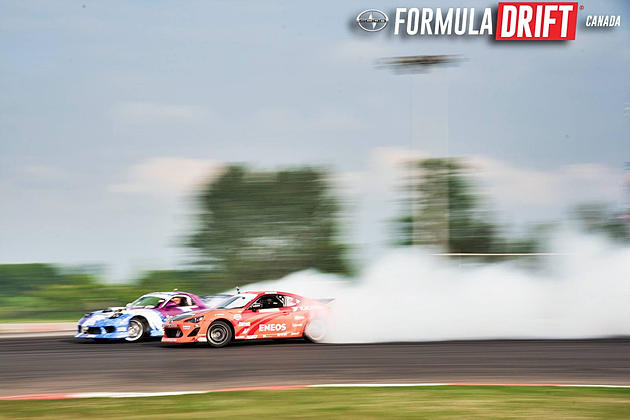 So the fight for the top spot was between Francis Tassé and Pat Cyr.  Two very different drivers with very different cars.  Both drivers did exceptionally well but the judges gave the win to Pat Cyr. A total of 11,250$ were given out in prize money: 5000$ to 1st place, 3000$ second place, 2000$ third place, and 250$ for the remaining top 8 drivers. 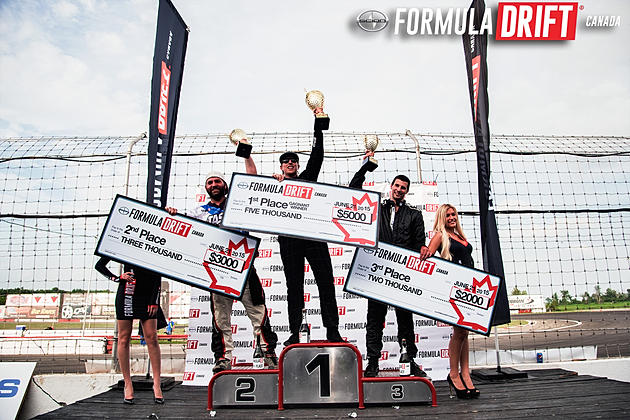 Conclusion
The first round of the season is now in the books. Although the bad weather had a negative effect on spectatorship, the race has clearly shown that drifting in Canada is now at a whole new level. Don’t miss round 2 on July 18-19 in Montmagny.