WALL, New Jersey (June 5, 2019) – Fredric Aasbo and the Rockstar Energy Drink / Nexen Tire Toyota Corolla Hatchback will be chasing for a win this weekend as the Formula Drift championship heads to New Jersey for Round 4.

Aasbo is second in the points as the 2019 season approaches its midpoint at Wall Stadium Speedway. He and the Papadakis Racing team are hoping to keep up the momentum from last month’s perfect weekend in Georgia, where the driver earned the top qualifying spot and brought home the win.

“I have a love-hate relationship with Wall,” said Aasbo. “I got my first series win there, but I’ve also experienced first-hand why they call it ‘the Gauntlet.’ This weekend is going to be about finding a good rhythm and riding that to the top of the elimination ladder.”

The track is nicknamed “the Gauntlet” for the treacherous guardrails that line its steeply banked oval. The Formula Drift track configuration uses parts of the high bank, straightaway, and inside turn. It favors precise driving coupled with careful setup.

“Every track in this championship offers something different and at Wall it’s about managing the bumpy transitions and staying just close enough to the edge,” said team owner Stephan Papadakis. “We’re happy with the way we’ve been able to refine the handling in the Rockstar Energy Drink / Nexen Tire Toyota Corolla Hatchback on ovals.”

Aasbo is the most winning driver in Formula Drift history, with 13 series wins — all since joining Papadakis Racing in 2011. He has earned two of those victories at Wall Stadium Speedway, his first in 2014 and a repeat a year later on the way to the 2015 championship crown. Last year, Aasbo scored ninth-place points there after he made contact with the guardrail.

ABOUT PAPADAKIS RACING: The Papadakis Racing team began drifting in 2004 and is the most winning team in Formula Drift history, earning the 2015 title with driver Fredric Aasbo, as well as back-­to-back championship titles with driver Tanner Foust in 2007 and 2008. The Rockstar Energy Drink / Nexen Tire Toyota Corolla Hatchback is the latest competition build from the Carson, California, based team.

Team owner Stephan Papadakis is a legend of sport-­compact racing who began building his reputation in the 1990s with the first front-­wheel­-drive, tube­chassis drag car in the U.S. The team earned multiple records and championships in the discipline, turning in elapsed times and trap speeds previously thought unattainable in front-­drive drag cars. Papadakis’ successes in front­-wheel drive were matched by his efforts in rear­-wheel drive when he campaigned just the fifth car to join the NHRA’s Sport Compact 200 MPH club.

Papadakis shares his experience on his popular PapadakisRacing YouTube channel. Through regular uploads from the shop and track, he has discovered a strong audience eager for his uniquely open and accessible approach to the technical side of vehicle performance. 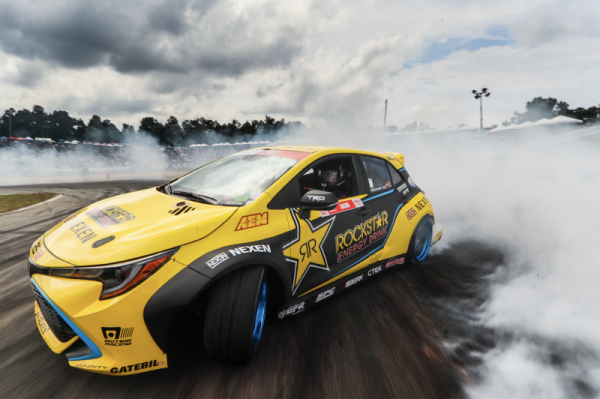