Round 7: AutoZone Streets of Long Beach Presented By TYPE S

It’s been 897 days since the 1000+hp cars of the Formula DRIFT PRO Championship turned a wheel in anger on the Streets of Long Beach. On its return, fans in the packed grandstands enjoyed perfect weather and watched the experienced drivers revive their muscle memory of the Long Beach street course that sits alongside the Pacific Ocean.

“It’s such an unforgiving track that I feel sorry for the new drivers who’ve not run here before,” said Justin Pawlak (USA) after winning his first heat. “For veterans like me, the muscle memory returns quickly and it gives us a big advantage over the new guys when running so close to the walls.”

Traditionally the opening round of the FD PRO Championship, drivers with an eye on the 2021 title needed to avoid the punishing concrete if they wanted to be in the fight for the Final Round at Irwindale Speedway – the House of Drift – scheduled for October 22-23.

QUALIFYING
With a number of drivers hitting the walls during practice for Round 7: AutoZone Streets of Long Beach Presented By TYPE S, there was a lot of activity in the pits to prepare the cars for qualifying. And Pawlak’s experience would pay dividends as he scored an almost perfect 97 points to take the top position.

Pawlak has produced some remarkable qualifying runs throughout the season in his Falken Tire Ford Mustang but he’s been unable to translate that into consistent competition results. His best finish to date was third at Round 2 in Orlando, so the pressure is on him to perform in Long Beach.

Fredric Aasbo (Norway) qualified second in his Rockstar Energy Drink Toyota GR Supra. Despite the car being semi-assembled after a heavy practice crash, he scored an identical 97 points. When this happens, the judges look at the individual scores for style, angle and line to separate the drivers. In this instance, Pawlak scored an extra point for angle and demoted Aasbo to second.

With four podium finishes from six events, including a win at the previous round in St Louis, Aasbo arrived in California with tremendous momentum. Sitting in third place, only 33 points from the lead, the 2015 FD PRO Champion appears to be building to a climax at the Irwindale Final.

After choosing, with considerable success, to qualify in lower positions earlier in the season to manipulate the pairings in the competition heats Chelsea DeNofa (USA) was back in business at Round 7. Scoring 96 points, he put his BC Racing / Nitto Tire Ford Mustang RTR Spec 5-D in third place, signifying he intends to wrestle the Championship lead back from Matt Field (USA) with whom he’s battled all season.

Field scored 94 points in the Falken Tire / Drift Cave Chevrolet Corvette, which was good enough for sixth position to keep the fight alive.

COMPETITION HEATS
With the threat of carnage lurking at every turn, the competition heats would be a testament to testicular fortitude, particularly for the Championship protagonists. And yet, even the most knowledgeable observer would be hard pressed to point out a driver who didn’t put everything on the line to secure a heat victory.

The “win or bin” mentality was perhaps epitomized by the RTR Motorsports teammates, Vaughn Gittin Jr (USA) and DeNofa. Sitting second and sixth, respectively, in the points table, the rational mind might expect team leader Gittin to push gently on the throttle of his 1200hp Monster Energy Ford Mustang RTR Spec 5-D. However, that would be to utterly underestimate the desire of each to win. And perhaps predictably, the two collided in Outside Zone 2 as DeNofa made a slight speed adjustment to negotiate the turn while Gittin kept his foot in. 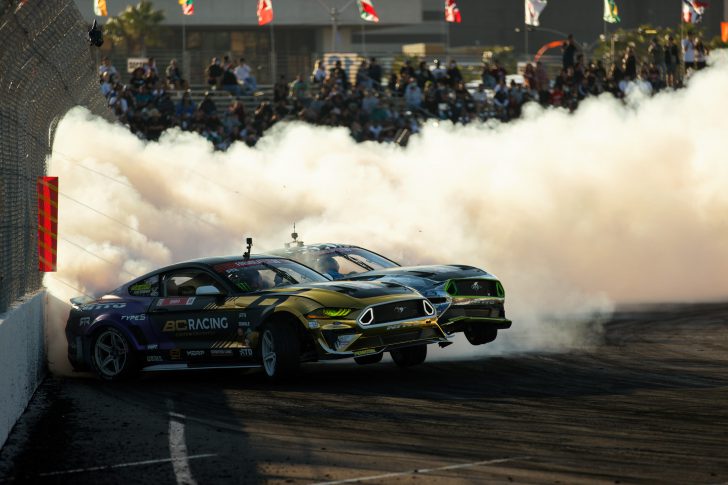 With a split opinion among the Formula DRIFT judges as to how to apportion blame, they returned for the second run with DeNofa at a slight disadvantage. He would subsequently spin in Touch & Go 2 as he attempted to put Gittin under pressure and keep his FD PRO Championship hopes alive.

Jumping from third to first in the points table, Aasbo appears to have perfectly timed his march to the 2021 title. He’s been insanely consistent throughout the season, claiming his fifth podium in Long Beach, which includes his first win at the previous St Louis round. But while he leads the Championship after Round 7: AutoZone Streets of Long Beach Presented By TYPE S, the event win would go to Aurimas “Odi” Bakchis (Lithuania) driving the Falken Tire / Feal Suspension Nissan S15.

Having won the opening round at Michelin Raceway Road Atlanta, Bakchis has been in the title chase all season. Some uncharacteristically poor performances at a number of rounds had maneuvered him to fifth in the Championship, but nobody underestimates him, and a good result on the Streets of Long Beach would keep his aspirations alive.

The weekend didn’t start particularly well when he qualifying 12th, and the consequence was a series of challenging match ups, beginning in the first round against the 2020 FD PRO Rookie of the Year, Adam LZ (USA) in the LZ S15.

Both drivers are fan favorites because they always push their S15s to the limit. And on their first run, Bakchis set a blistering pace that resulted in LZ being off-line at the final turn, Inside Clip 1, as he fought to maintain proximity.

With LZ’s run judged incomplete, Bakchis simply had to complete his chase run with enough style to take the win. However, LZ had different plans. He rocketed from the lights and challenged the Lithuanian to stay close. In his attempt, Bakchis surged into the same final turn, colliding with LZ as they transitioned. With both drivers coming to a halt, Bakchis was ruled at fault and his run was also incomplete.

With both chase runs scoring zero points, the judges referred to each driver’s lead run and determined that Bakchis had drifted deeper, awarding him the win.

With no easy runs in FD PRO, the intensity ramped up as Bakchis faced 2011 Champion, Daijiro Yoshihara (Japan) in the Top 16. The driver of the Turn 14 Distribution / Falken Tire / ENEOS Oil Subaru BRZ turned it up to 11 and set an exemplary lead run, but Bakchis remained at his side like a clingy girlfriend. On his chase run, Yoshihara drifted shallower lines to maintain proximity, which was enough to send him on his short drive home.

In the Top 8, it was the turn of 2013 FD Champion Michael Essa (USA) to try to send the Nissan driver home. Essa had been on fire all weekend, qualifying fourth at his home track and looking good for the win. However, the driver of the FCP Euro / Liqui Moly / GT Radial BMW M3 made his only mistake of the event in the chase position. He slid into the wall in Outside Zone 1, forcing him to correct, which handed the win to the more precise Bakchis.

In the Top 4, all bets were off as Bakchis faced three-time FD PRO Champion Chris Forsberg (USA) driving the NOS Energy / GT Radial Nissan 370Z. With a healthy dose of mutual respect between the drivers, the packed grandstands leant forward.

As in his previous heats, Bakchis left the start line fast. He set a pace that is difficult for anybody to follow, including the massively experience Forsberg, who made a small mistake at the end of his chase run, making contact as the two drivers compressed into the final turn. It was enough to get the nod from the judges, on a tight, split decision, and move Bakchis into the Final against another formidable foe.

This time it was 2015 FD Champion Aasbo, fresh from his own Top 4 battle against double FD Champion Gittin, who still his teammate’s blood on his hand when they met. Aasbo had taken the win by a tiny margin and would be a formidable adversary for Bakchis in the Final.

With Aasbo leading the first run, he wore the Lithuanian like an corset, barely able to breathe with the proximity. With the roles reversed and Bakchis in the lead, he simply did a better job, filling each drift zone more than the Norwegian. 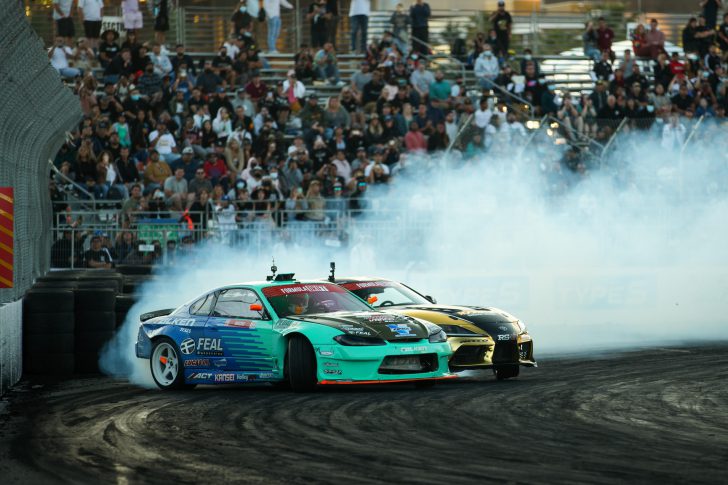 As a reward for the hard-fought win, Bakchis got to speak to us after the podium celebration. “I needed this win really badly, and it’s a huge confidence boost. We won the first round and fought hard all season but had some bad luck in the middle, so earning first place is a tremendous boost. But we had to earn it; we had to battle through some tough competitors, most of whom were former Champions. But I was able to step it up as needed, and the team did a phenomenal job keeping the car together. I’m stoked with this win and hope to keep the momentum going into the Irwindale Finals.” 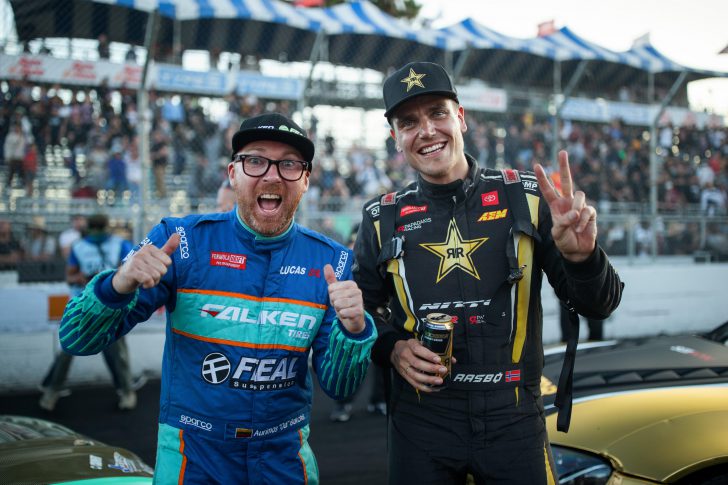 The win moved Bakchis to fourth in the FD PRO Championship standings, 43 points from the lead and with a chance of taking the 2021 title at Round 8: TYPE S Title Fight.

The only top title contender we haven’t mentioned is Matt Field (USA), who was the points leader prior to FD LB. He was another driver slain by Gittin as Field’s Falken Tire / Drift Cave Chevrolet Corvette was knocked out of the Top 16 in an intense battle that went to One More Time. Unfortunately, the front suspension broke on the Corvette on the third run, causing him to spin into the tire wall and resulting in the Gittin win.

Finishing 11th on the night, Field dropped to third in the FD PRO Championship; 20 points behind Aasbo and a single point behind DeNofa. The Irwindale Finals will be a bloodbath!

Top Rookie at FD LB was Jonathan Hurst (USA), who both qualified and finished 14th in the Cash Racing Infiniti G37. He narrowly trails Branden Sorensen (USA) and Simen Olsen (Norway) in the 2021 Rookie of the Year title race.

At this point, we’re contractually obligated to give the final word to Formula DRIFT President, Jim Liaw, who is on his farewell tour before heading to Performance Racing Industry in 2022 and handing the reins to co-founder Ryan Sage: “It’s great to return to Streets of Long Beach after two and a half years. The fans here are still among the strongest on the tour and it’s such a relief to finally return to our home track. We’re delighted they were able to witness such an incredible show by the world’s top drift drivers. We’re also grateful the weather was perfect but we look forward to returning to the April schedule for Streets of Long Beach in 2022.” 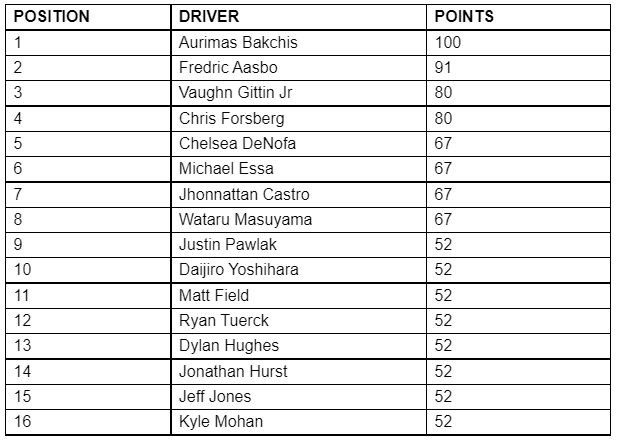 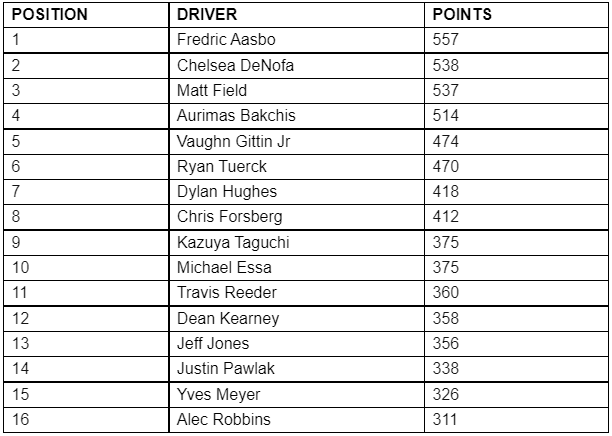 NEXT ROUND
Irwindale Speedway – the House of Drift – will host Round 8 TYPE S Title Fight. This is the Final Round of the Formula DRIFT PRO and Link ECU PROSPEC Championships, scheduled for October 22-23. Please visit formulad.com for the competition schedule, ticket information, driver profiles, special content and the event livestream