To better represent the Formula DRIFT series, the drift demo evolved into Super Drift in 2012, which has drivers competing in pairs through turns 9-11 for the Grand Prix audience without scoring championship points. Just like an FD event, drivers are eliminated via competition heats until a winner is found. However, the packed weekend schedule means that unlike a full FD event where 32 drivers compete, Super Drift invites eight drivers to create a compressed format.

Taking place on Friday under early evening floodlights, the big surprise for drift fans was the appearance of Forrest Wang (USA) on the Super Drift roster. The popular driver has been absent from Formula DRIFT since completing the 2019 season, but notably won both Super Drift rounds that year – the last time Super Drift was held because of the COVID-19 pandemic.

Unfortunately, Wang was eliminated from the first round this year by an on-form Justin Pawlak (USA) driving the Falken Tire Ford Mustang. Wang’s downfall was a mistake on his chase run where he had to make a big correction in the final turn and was ruled incomplete. Despite small mistakes by Pawlak, he progressed to the Top 4 heats to meet Jeff Jones (USA) driving the Jeff Jones Racing / GT Radial Nissan 370Z. 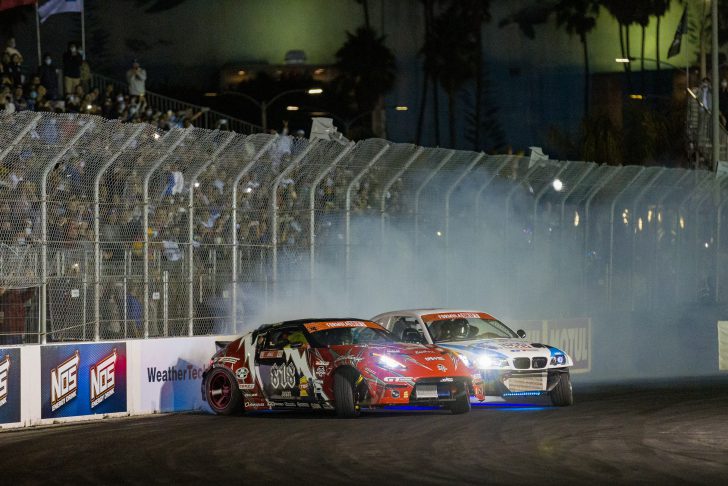 Jones had defeated Kyle Mohan in his first heat after his KMR / Renewable Lubricants / Mazdatrix Mazda RX-8 experienced technical problems. His battle with Pawlak would be his first real test and it was a corker.

Despite less power than the 1000hp under Pawlak’s right foot, Jones acquitted himself well. In fact, the judges were unable to separate the two drivers after their tandems runs, so requested One More Time. When this happens, the drivers repeat both runs, and with Pawlak leading the third attempt, he attacked the course at speed. However, he over-rotated in Outside Zone 1 causing Jones to adjust his line but the pair finished the run together.

With Jones in the lead, Pawlak followed him like a devoted puppy. Both drivers crossed the line together but Jones was given the win in light of Pawlak’s small mistake on the previous run.

Jones then faced 2013 FD Champion, Michael Essa (USA) in the final. Driving the FCP Euro / Liqui Moly / GT Radial BMW M3, Essa had looked imperious at last weekend’s FD Long Beach round and would’ve been the betting man’s choice. However, Essa was slow to initiate on his chase run but otherwise maintained impressive proximity throughout the course. With Essa in the lead, he drifted deep into the turns, and when Jones went off in the final turn, it appeared Essa was the victor. However, the video replays showed Essa had slowed in the wrong area, forcing the mistake from Jones. As a result, Jones was the winner of Super Drift Day 1.

Pawlak would claim fourth after he lost the third-place run-off to Rome Charpentier (USA) in the Garagistic / Federal Tire BMW E36. In the chase position, Pawlak hit the wall hard in Touch & Go 1, causing him to straighten and be ruled incomplete. Despite a good lead run, the damage was done and Charpentier finished third.

If Day 1 had been difficult for Pawlak, the Saturday event looked equally bleak. He was paired against Essa in the opening heat and both drivers are renowned for their speed and aggression.

Both performed at their best on the first run, with Essa running deep lines and Pawlak shadowing him closely. This meant the pressure was on Essa for the second run, and he over-rotated in Outside Zone 2 as his drift went awry. Essa corrected the slide to prevent a spin but was forced to straighten and ruled incomplete.

Pawlak moved into the Final 4 where he again met Wang. On their first run, Pawlak again performed perfectly in the chase, challenging Wang to replicate his performance. However, the speed of the Mustang in the first half of the second run meant Wang was unable to keep pace, and that made the difference. Pawlak was promoted to the Final.

Sadly, the expectant crowd was robbed of the prospect of a Ford Mustang showdown when Trenton Beechum (USA) was forced to call a Competition Time Out for his Clonex Racing / Nexen Tire Ford Mustang. Rushing back to the pits, his team had 5min to diagnose and repair the problem. Unable to perform the miracle, Pawlak took a victory lap before claiming his Champagne on the podium.

Wang out-paced Charpentier in the third-place run-off and reminded us why he’s missed from the Formula DRIFT PRO Championship. Hopefully, we’ll see his name back on the driver roster in 2022, or back in Super Drift at the very least. 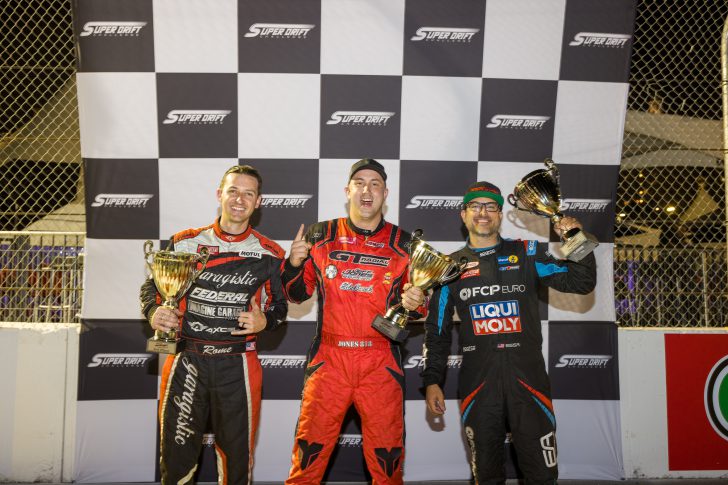 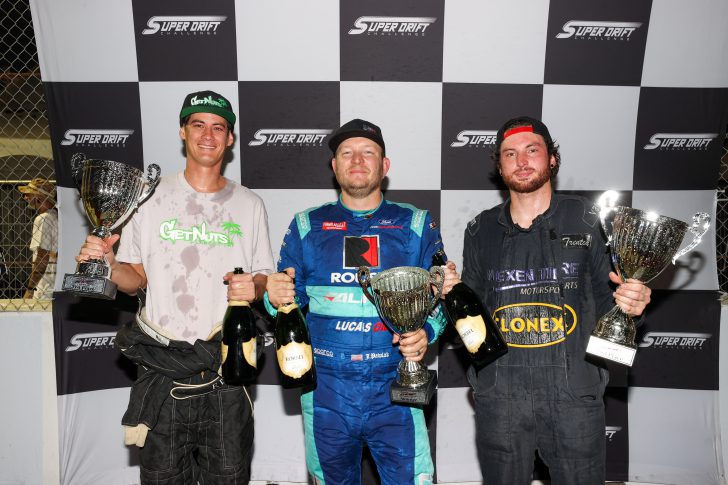 FORMULA DRIFT NEXT ROUND

Irwindale Speedway – the House of Drift –  will host Round 8 TYPE S Title Fight. This is the Final Round of the Formula DRIFT PRO and Link ECU PROSPEC Championships, scheduled for October 22-23. Please visit formulad.com for the competition schedule, ticket information, driver profiles. special content and the event livestream