With the previous two rounds taking place at new venues, many of the 2021 Formula DRIFT PRO Championship teams were glad to return to the familiar surroundings of Evergreen Speedway in Monroe, WA for Round 5: Throwdown.

The Seattle round marks the second half of the season and is the point at which a number of leading drivers need to mount a determined assault on the title before it escapes their grasp. And with the new-for-2021 Knockout Qualifying Format throwing up some unpredictable qualifying results, it’s proving even harder to predict the FD PRO Championship winner. 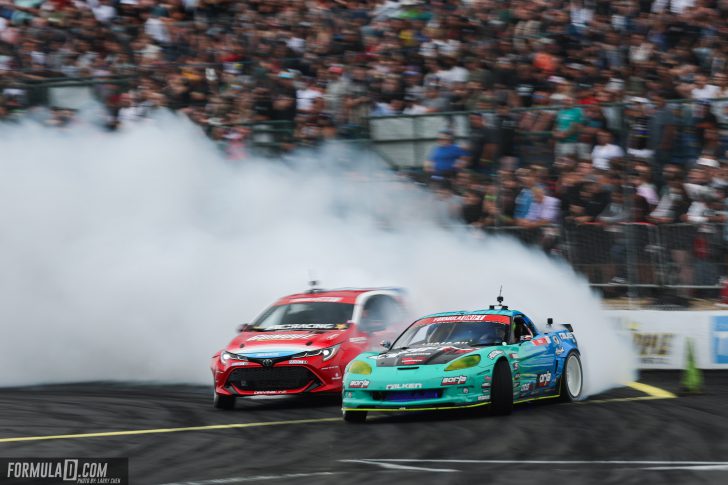 Continuing to keep everybody on their toes, qualifying immediately threw its first wrench into the machine as the session began. With Matt Field (USA) – the 2021 FD PRO Championship points leader – running first to set the bar for the rest of the field, there was an audible gasp when a dramatic correction during the run meant his first attempt was judged incomplete.

By the rules of the Knockout Qualifying Format (KQF), only the bottom eight qualifiers run a second time. For everybody else, you have one chance to determine your position in Saturday’s Top 32 heats. And with Field relegated to the bottom eight, the best qualifying position he could now achieve was 26th place. However, a second incomplete run could see him pack his bags and head home.

At his second attempt, Field found his stride in the Falken Tire / Drift Cave Chevrolet Corvette and was awarded 95 points. This would have equaled the top qualifying score had it happened in the first round. However, KQF meant it was enough for 26th and guaranteed further drama in the competition heats.

While Field faltered, 2013 FD Champion Michael Essa grabbed the opportunity in both hands and threw down an impeccable qualifying run. In doing so, he maintained his impressive 2021 qualifying form, but Essa needs to convert Friday success into Saturday silverware. Sitting in 16th place coming into Round 5, he’s one of the drivers for whom the 2021 title could soon drift beyond his reach if he doesn’t act quickly.

The same applies to three-time FD Champion Chris Forsberg (USA) who qualified second after languishing in the KQF zone in previous rounds. He seemingly resolved the technical issues that plagued his NOS Energy / GT Radial Nissan 370Z to keep his title challenge alive. The solution was a cable operating his electronic throttle body to avoid the unexpected closure he’d been experiencing.

Third-placed Ryan Tuerck in the Gumout / Nitto Tire / Mobil1 Toyota Corolla Hatchback was one of three drivers to score 90 qualifying points, taking the position by virtue of a superior style score. Sitting in eighth, 102-points behind Field, Tuerck still has a fighting chance, which is what he does best.

Fourth place went to 16 year-old Branden Sorensen (USA) in the 212 Performance / Sorensen Motorsports BMW. The FD PRO rookie’s remarkable achievement is a reflection of his huge talent and it’s surely a matter of time before he stands on the podium.

Another qualifying anomaly we should consider is that of Chelsea DeNofa (USA) who sits second in the FD PRO Championship and is the only driver to score two wins this season. Having stated that he prefers to chase in the competition heats driving his BC Racing / Nitto Tire Ford Mustang RTR Spec 5-D, there was speculation that he might deliberately qualify poorly in order to move himself down the ranks. If that was the case, it almost backfired because he made a significant correction in Outside Zone 3, resulting in a score of 75 points. This dropped him into the KQF bottom eight and required him to run a second time.

On his second run, DeNofa got a score of 92 points, which would’ve put him in third place had it happened in the first round. However, it put him in 27th and against Aurimas “Odi” Bakchis (Lithuania) in the Falken Tire / Feal Suspension Nissan S15. Bakchis is fourth in the FD PRO Championship and not somebody most people would pick for their first competition heat.

With 33 drivers attempting to qualify for the Top 32 competition heats, at least one would be eliminated. Unfortunately, after two incomplete runs, the axe fell on Wataru Masuyama (Japan) who was clearly suffering technical problems with his Buy Now Japan Nissan Silvia S15. 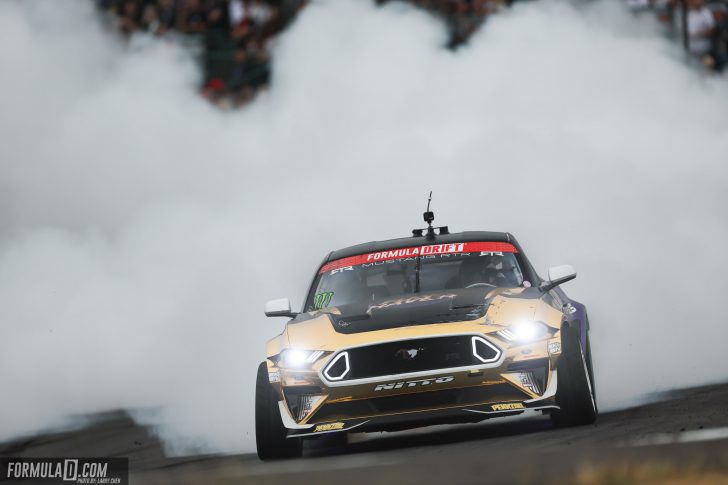 Despite the high-risk qualifying strategy, Chelsea DeNofa’s gambit paid off, resulting in his third win of the season and second in a row, finally handing him the lead in the 2021 Formula DRIFT PRO Championship by a narrow one-point margin from Matt Field.

Field’s fate was also determined by his qualifying position, reaching the Top 4 but being relegated to fourth, behind Dylan Hughes (USA) who put his Permatex / GT Radial BMW E46 in third place by virtue of a superior qualifying position.

Surely DeNofa questioned his tactics as he lined up alongside Bakchis in the Top 32 heats. The Lithuanian driver is among the top drift racers in the world and never a pushover. Both drivers attacked without mercy but a small error by Bakchis in the chase position saw him make contact with DeNofa’s door, which pivoted the BC Racing / Nitto Tire Ford Mustang RTR Spec 5-D into the wall, halting both drivers. With Odi assessed at fault, DeNofa returned to the pits to repair and prepare for his Top 16 heat against Trenton Beechum (USA).

In an all-Mustang confrontation, DeNofa made a big correction in Outside Zone 1 while trying to maintain proximity to Beechum’s Clonex Racing / Nexen Tire Ford Mustang. With DeNofa under pressure, he drove hard and opened a lead over Beechum. And as Beechum tried to close the gap he corrected in Outside Zone 3, straightened, ran off the track, and DeNofa took the win.

With the god’s smiling on Chelsea, he got a bye run through the Top 8 after Jeff Jones (USA) failed to repair the Jeff Jones Racing / GT Radial Nissan 370Z during a five-minute Competition Time Out. This was after his Top 16 competitor, Dean Kearney (Ireland) also failed to repair his Oracle Lighting / Team Karnage Viper. With both drivers out of the competition, the peculiar twist of fate propelled DeNofa to the Top 4 and a battle royale against Hughes.

The BMW driver had an impeccable lead run but couldn’t match DeNofa’s proximity in the chase position. And that’s how Chelsea found himself waiting on the starting line for Ryan Tuerck to address an overheating problem, which saw the Toyota towed back to the pits for more coolant and quiet prayers. However, the overheating instantly recurred as the Gumout / Nitto Tire / Mobil1 Toyota Corolla Hatchback returned to the line.

Jumping out of the car, Tuerck congratulated his adversary and DeNofa took his second victory run before stepping onto the podium to accept the trophy.

“What an awesome event, but this was definitely not how I wanted to win,” DeNofa explained. “But a win is a win and we get the points. We’re definitely chasing the Championship right now. In fact, I think we’re leading, so we’re all pumped!

“The car is running great but I typically don’t do well here, so it’s nice to get some luck. The track is challenging; I think transitioning off the banking is one of the trickiest sections of the entire season. But we figured it out and with a bit of luck we got on the podium. And I think we can keep doing this for the rest of the season and go all the way!”

Not only did DeNofa win the event but many of his fellow title challengers stumbled early in the heats, helping to widen the gap to rivals Aasbo, Bakchis and even teammate, Gittin Jr.

And to get his thoughts on the return to Evergreen Speedway, we caught up with Formula DRIFT President, Jim Liaw: “It’s great to be back in the Pacific Northwest with packed grandstands after we were unable to have fans last year,” he told us. “It’s always been one of our favorite rounds because of the tremendous energy the fans bring to the event. The teams and drivers certainly missed them last year and certainly brought more intensity this year with fans in attendance. So, we were delighted to have the capacity crowd witness the start of the second half of the season as we head towards the Final. And with visits to St Louis and the unforgiving walls on the Streets of Long Beach yet to come, anything could happen before we reach the Irwindale Finals.” 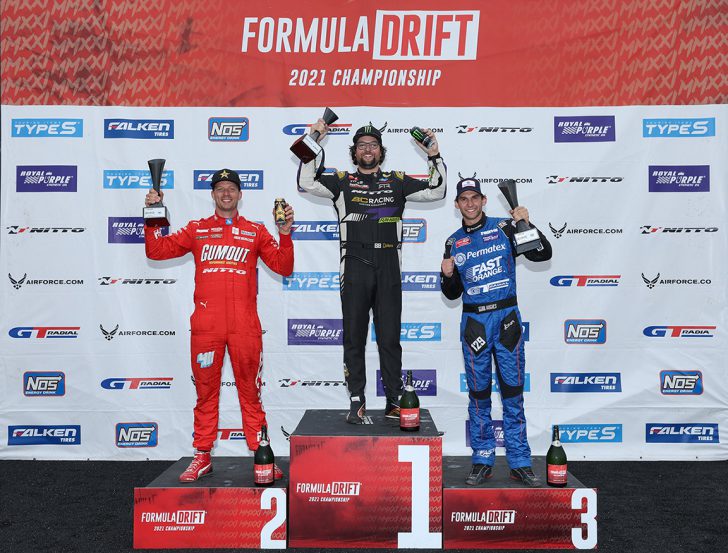 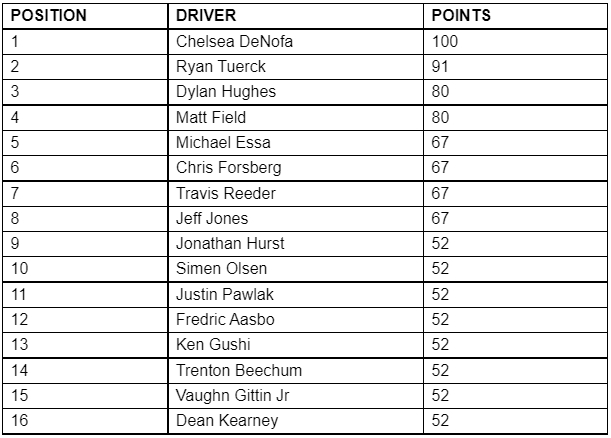 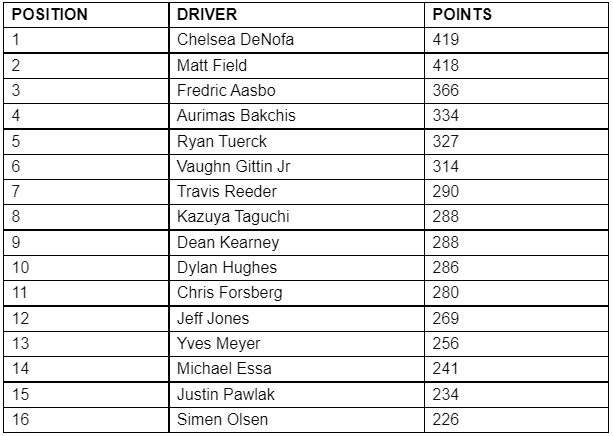