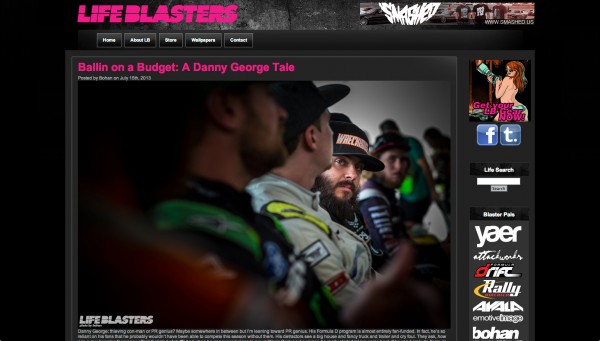 He’s a Las Vegan. He’s a dad. He’s a guy who isn’t afraid to rock pink-spandex pants (and lipstick). He’s Danny George, the lone Miata driver in Formula Drift. And just like his car, he’s small but powerful.

The car goes from zero to hauling ass before I can suck in a breath, engine whining hard and hot like an animal bearing down. Front wheels cranked and rear wheels spinning, we get sideways. Then it’s gas pedal, knifing into position and sliding through the next corner with creamy white smoke pouring off the tires like dry ice. Rubber shrapnel coats the air. Seconds stretch inside the chaos, so I can see Danny George’s hands and feet and sheer will methodically making this Mazda Miata do things that should be impossible.

“Isn’t it so awesome?” he asks when we stop, and it might be the only time I use the word the way it was intended. Not for a taco shell made of Doritos—for an emotion described in the dictionary as a mix of dread, veneration and wonder.

This is drifting, where a driver breaks the back wheels out of traction while maintaining control through a gracefully violent slide. This is the second time I’ve experienced it inside “the beast,” car No. 7 on the pro circuit known as Formula Drift.

FD is one of the rare competitions on the track where speed isn’t king; in fact, it’s only worth 10 points. A 100-point run is about the perfect line (25 points) and mad style (40 points), kissing the wall with maximum angle (25 points) and showing your personality without ever showing your face. In the qualifying round drivers run solo, followed by tandem eliminations where two cars drift side by side. 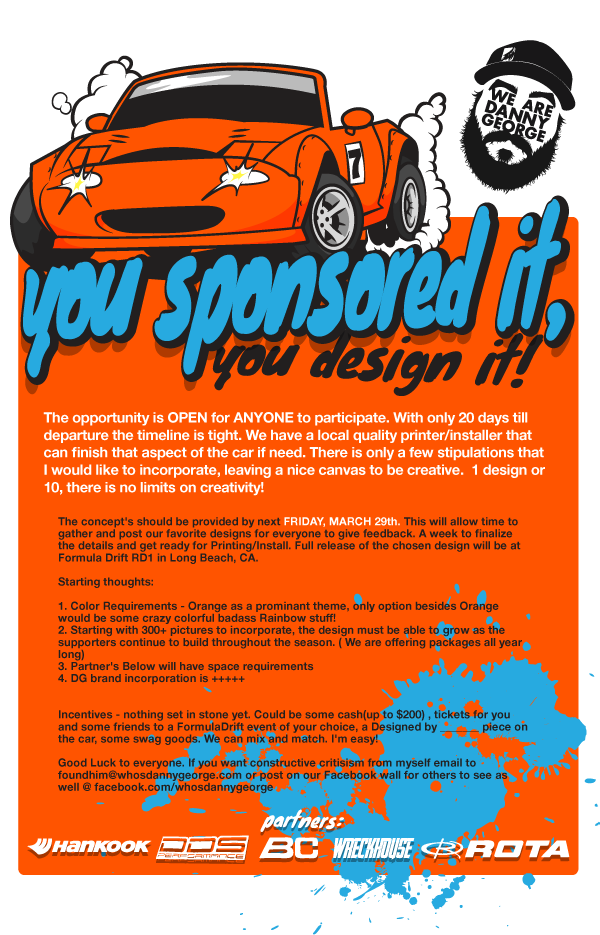 First, I want to thank you for clicking this page to help support Danny George!

I always wondered what it would be like to be a racecar driver, so I took a giant leap later on in life to pursue my dreams. Now, having been provided an opportunity to race in my favorite racing sport of all time, also known as drifting, I realized what it was like from both sides of the helmet, the driver and the fan. This is why my team’s number one goal during the 2012 Formula Drift season was to interact with the fans as much as possible; providing as much involvement, knowledge, and friendship to each and every one of them. My recognition of this open communication with the Formula Drift fans was immortalized when my fellow drivers and crew members voted and awarded me and my team the winner of “The Spirit of Drift.” This coveted award embodies the essence of the sport of drifting! END_OF_DOCUMENT_TOKEN_TO_BE_REPLACED