SpeedHunters.com put out a great article on the behind the scenes in designing the teams’ livery. They did a great job explaining the design process. 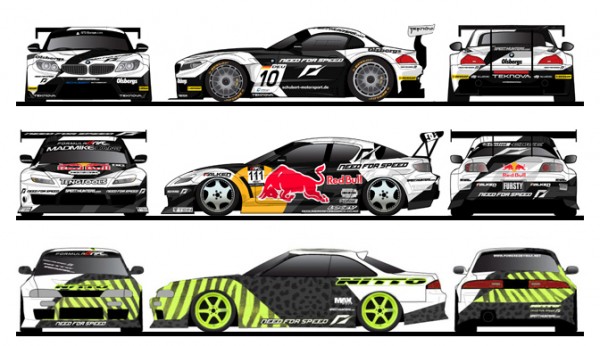 By Andy Blackmore
It is is quite unusual, as a designer, to be allowed to show the design process and show the designs which didn’t make it, but thanks to Speedhunters, I’m able to share some of the behind the scenes work on the Team Need for Speed livery design.

I have been very fortunate and have designed hundreds of liveries in my time, around 60 have seen the light of day. Many stay inside unsuccessful sponsorship proposals which teams and drivers had presented. This was probably the hardest design to work on…. well there was this Panoz livery once…..

We knew early on, Team Need for Speed would make its debut in GT racing and Drifting. Two diverse disciplines. In order for the livery to work and be recognizable as a Team Need for Speed identity it had to have a strong graphic which set itself apart from other cars on the grid.

The livery had to work in both arenas, which was an additional challenge.

Be sure to check out the full article on SpeedHunters.com