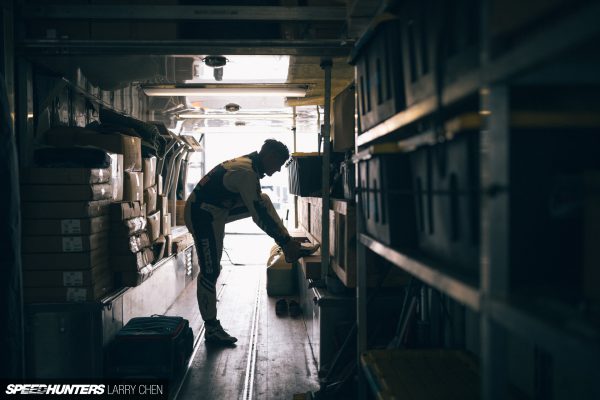 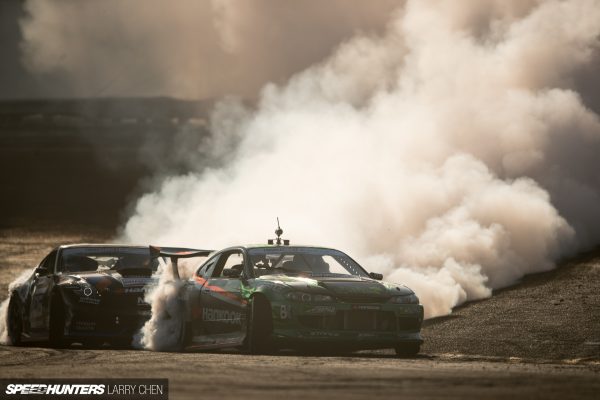 During a professional drift competition like Formula D, there are so many little moments that happen all over the place. I guess it’s the photo nerd in me that see a picture in every moment, even if it involves kneeling down in filthy rain water.

I gathered up 50 of my favorite shots from the season opener in Long Beach, and have provided a little insight into every photo. Enjoy!

I could physically only get this shot during the Formula Drift weekend, because I am actually standing on the race course. Of course, it doesn’t matter as the end of the FD course is at the exit of Turn 11. The weekend afterwards they run the entire length of the course for the Grand Prix. END_OF_DOCUMENT_TOKEN_TO_BE_REPLACED

My fellow Speedhunters, I have something on my mind that I’d like to speak to you about.

So as you might know, we ended up winning Formula Drift Long Beach and are currently leading the Formula Drift World Championship. Needless to say, winning the first round of the year is a pretty big deal, but the win came with a bit of controversy, which has had me thinking…

I mean, every corner of our Scion tC was banged up and we literally had to push the car to the podium after the clutch blew in the very last turn of the final run. But my concerns aren’t really about the car, because I know the Papadakis Racing guys have that part handled. Instead, I’m more worried about what you’ll see in the video below.

This is the first time this camera angle has been made public, and it shows exactly what happened in my runs with Ryan Tuerck. Long story short, we had a faulty shifter fork (old design) in the transmission, which didn’t allow the dog ring to fully engage, and hence wore it out prematurely. That meant 2nd gear started popping out – at this exact moment. Watching the video cracks me up as I look like a complete question mark, looking down at the shifter. ‘How could you do this to me? After all we’ve been through!” Ha!

Every Formula Drift team – in fact, every racing team – has mechanical issues. It’s inevitable when you’re trying to extract maximum performance from an orchestra of mechanical parts. But, believe it or not, I’m fine with that because not having reliability issues means you’re not out there competing.

What I’m not fine with is not staying in tune with you guys. I feel like I should, and could, do a much better job of explaining what goes on at the track in a more timely manner. Imagine if we would have been able to show this video angle on the Livestream during the event… Given that people started questioning what happened in these runs with Tuerck – some suggesting that it was on purpose – this would have given some good insight.

Also, imagine that if at this very moment the Formula Drift Livestream interviewers had headed over to Steph in the spotter tower and asked him what what was going on. Or better yet, what if the FD Livestream could tap into our radios and get the raw deal?

This isn’t criticism of FD, who I feel like have made several great changes this year. The responsibility for communicating with the drift fans also lies upon us as teams and competitors. All I’m saying is that I believe there’s so much more potential with communicating what’s going on to the spectators – and that makes me really excited about the future of drifting.

I’ve gone through the recent Formula Drift related discussions in the comments sections of various posts here on Speedhunters and I agree with a lot of it. FD has the most consistent judging of any drifting series I’ve seen, but it might not always be easy for the casual viewer to grasp all the details of a particular judged decision.

More transparency and using technology not for the judging itself, but for showing the fans why a certain run was judged the way it was would be awesome. Think American football video overlays that show distance in an easy-to-understand way that would highlight hard-to-spot details.

What do you think is the way to go to produce the best live drift video coverage? Feel free to comment below! I will chime in once I get a chance – but please know that I have my work cut out for me this weekend (see, that’s the ‘respond in a timely manner’ out the window already!). Heading into Round 2 in Atlanta I have some clear favorites…

There’s Odi Bakchis, one of the smartest guys in the scene who proved it by making the Genesis a killer right out of the gate in his first event driving the car. In my opinion, Odi is on his way to perfecting the new school drift configuration, which is basically a very grippy and fast setup that he is still able to drive on a wide, outer line without excessive understeer issues.

He definitely would have taken us out in the Long Beach finals if it wasn’t for that hit in the last turn. And for the record, I was possibly going a bit slower than normal through the last turn due to the lack of second gear, although from the seat of the pants it felt like the same speed as previous runs as the only difference is I drove it off the clutch as I stayed in third. I think the reason for the hit was that my line through that final turn is very deep (trying to cater to the judges preferred line as illustrated here) while Odi got a little too hungry and dove in on a shallow line.

Overall, I am however very impressed and inspired by Odi’s driving and engineering, and he’s just getting started!

Our Speedhunters teammate Mad Mike Whiddett is back with what is on-paper his most competitive build yet. I’ve been driving with Mike across the world over these last years and he is a fantastic driver, in both lead and follow position. Sometimes his ‘all or nothing’ approach costs him rounds, but in terms of entertainment value there’s no one better. And if everything falls into place, there’s no doubt Mike will be extremely hard to beat. I’m very excited to see you back in FD, Mike!

Then there’s good ol’ Jr. who won in Atlanta last year and beat us in the final. Will he seek redemption from Long Beach?

All I can say is this: if previous years of Formula Drift Atlanta are anything to go by, we’re in for a good one. Let’s do this!

Formula Drift Atlanta 2015 will be remembered for a number of things: the debut of RADBUL, the shock exits of Vaughn Gittin Jr. and Fredric Aasbø in the Top 16, and the epic Nitto Top 4 battles between Ken Gushi and Chris Forsberg that went One More Time not once, but twice. When the smoke cleared though, it was Aurimas ‘Odi’ Bakchis who stood atop the podium after beating out Gushi in a hard-fought and very close Nitto Final. Stay tuned for full event coverage in the coming week!

All eyes were on Mad Mike Whiddett as he pulled up to the line for his second qualifying run at this weekend’s round of Formula D in Atlanta. He told everyone he was going to take it easy, but he pulled off one amazing run for an 8th place qualifier. After not competing in Formula Drift for such a long time, it’s great to see Mike in excellent form. It’s going to be interesting to see him in battle once again as the season progresses.

END_OF_DOCUMENT_TOKEN_TO_BE_REPLACED 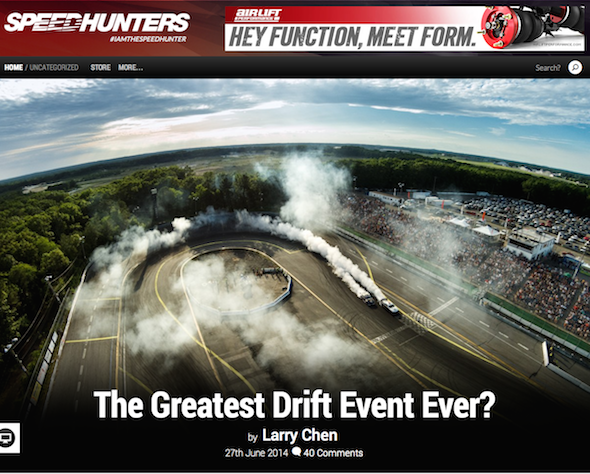