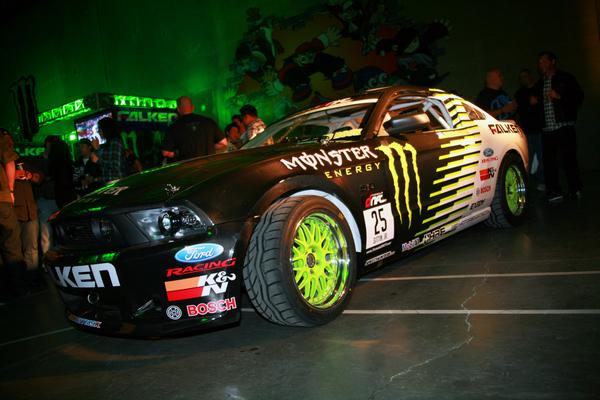 “Monster Energy is a leading supporter of motorsports across the globe, so to bring
them into Drifting in a big way is huge for the sport,” said Gittin, Jr., 29, of
Joppa, Md. “It is an honor to join the long list of elite athletes that represent
Monster Energy. Between Monster Energy, Team Falken Tire, and our Ford Racing 5.0L
2011 Mustang, we have everything we need be a competitive force in the Formula Drift
Championship this season.”

Gittin Jr., known as “JR” in the sport, has become one of drifting’s most iconic
figures and his machine, the 680HP Ford Mustang GT, one of the sport’s most
identifiable cars. Gittin is known best by his aggressive, foot-to-the-floor,
big-smoke driving style. Being such a fierce competitor, Gittin is known as the only
American to beat the Japanese at their own game in winning a D1 Grand Prix
competition, not once – but twice. In 2005, Gittin stunned the world when he won the
D1GP USA vs. Japan event. In 2007, he brought America home the gold once more by
winning the D1GP World Championship. Gittin has earned five career podiums in the
Formula Drift series, which has cemented itself as the premier Drifting series in
the world.

“Vaughn’s talent, passion, and drive make him one of the most unique and charismatic
personalities in all of Drifting,” said Mike Vicente, Monster Energy’s Motorsports
Marketing Director. “For these reasons, Vaughn is a perfect ambassador to help
Monster Energy make an immediate impact on the sport. Vaughn goes above and beyond
by pushing the limits of traditional sponsorship by creating unique concepts and
programs, yet still retaining his grassroots connection to the sport.”

The partnership was secured and is managed by Gittin’s management firm, Motorsports
Management International, located in Mooresville, NC.