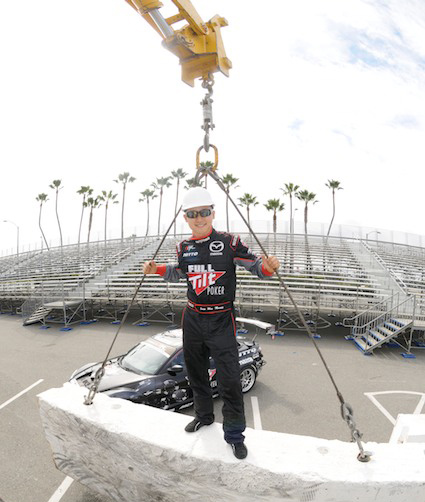 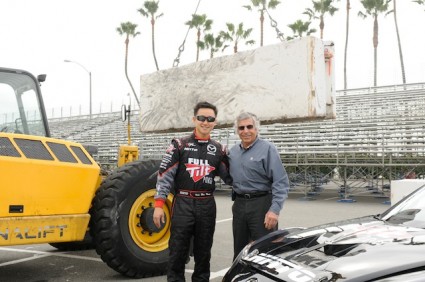 The construction got underway with an assist from Formula Drift driver Joon Maeng who appeared at the track for a kickoff photo shoot with his Team Bergenholtz Full Tilt Poker Mazda RX-8. Maeng is preparing to contest the upcoming Formula Drift season which gets underway the weekend before the Grand Prix on Turns 9, 10 and 11 of the 1.97-mile circuit in downtown Long Beach.

“We also install porta-johns, hospitality suites, tents, trash containers, electrical equipment, phones and a hundred other little things up until race weekend,” said Tanaka. “Then Sunday night, when the last race car has left the track, we start taking everything down, inspecting it and getting it ready for 2012.”

“We want to keep the circuit exciting for our fans and, of course, competitive and safe for the drivers,” said Jim Michaelian, president and CEO of the Grand Prix Association of Long Beach. “While Dwight and his staff do a terrific job, we couldn’t do it without the help of many Long Beach city departments and a host of private entities.

“That phenomenal support is what helps us make the Toyota Grand Prix of Long Beach America’s number one street race.”

Tickets for the Toyota Grand Prix of Long Beach, featuring six racing events including the IZOD IndyCar Series, can be purchased from the Grand Prix ticket office by calling toll-free at (888) 82-SPEED, or you can select your seat online by visiting gplb.com. A handy ticket brochure – which includes circuit map, grandstand and parking locations, ticket prices and order form – can be obtained online or by calling the ticket hotline.

Ticket prices range from $26 for Friday general admission up to $130 for a three-day ticket that includes Saturday and Sunday reserved seats in upper levels of the grandstands. Pre-paid parking packages are also available when ordering through the Grand Prix Ticket Office. Handicapped seating, IZOD IndyCar Paddock access, super photo tickets and a variety of hospitality club packages are also available.