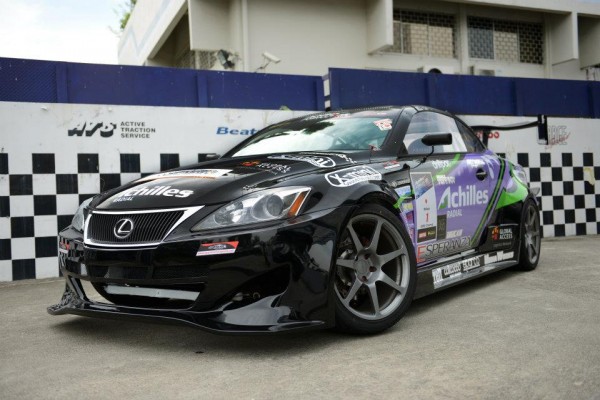 1 JULY 2012 (SINGAPORE): Achilles Formula Drift Singapore 2012 came to a pulsating end with reigning champion Daigo Saito from Japan, hoisting the trophy once again here at the Changi Exhibition Centre in front of more than 9,000 fans over the two-day competition.

The fans in the stands were clearly up for some thrilling drift action, and the drivers did not disappoint as they pushed themselves to the limit in the Round of 32 on the new course. Saito, who finished top of the Qualifying Round with a score of 92 on Saturday, received a bye and dispatched Malaysia’s Muhammad Zaiham Hamdan in his 2001 Nissan Silvia in the Round of 16. He followed up with convincing wins against Emmanuel Adwitya Amandio from Indonesia in the quarter-finals and Robbie Nishida in the semi-finals.

The surprise of the day was Indonesia’s Rio Saputro Budihardjo driving in his Nissan Cefiro A31 who gave notice to the competition as the second seed going into today’s Round of 32. Budihardjo continued his superb form, storming into the Final after taking out Malaysia’s Ser Ming Hui and crowd favourite Ken Gushi from the USA in the Round of 16 and top eight respectively.

With a roaring crowd behind them, Saito and Budihardjo revved up their engines for the Final. In the first tandem run, the Indonesian spun out and the reigning champion put himself in the lead. However, in the reverse run, Daigo was penalized for straightening out at the final clipping point, forcing the finalists to a One More Time.

In the second run, Daigo jumped out to take his line early to put a sizable lead ahead of Rio, leaving the Indonesian with too much distance to catch up. With the pressure on the rookie, Rio spun out and the Japanese claimed his second Achilles Formula Drift Singapore title after his success last year.

A humble Saito said: “I am pleased to win the Achilles Formula Drift Singapore for a second time and it was a tough final against Budihardjo. He has been in great form all weekend and I had to focus and give it my best shot to retain the title. I have always enjoyed the event here in Singapore as the crowd is always cheering us on and I will definitely be back for more.” “Of course I am very happy and thrilled to have made it all the way to the Finals. I have always looked up at Daigo as a role model and he is one of the strongest competitors in the world. I had to push my car to the limit just to match him and as a result, I spun out. But the result is still a great one for me and my team.” chirped Budihardjo.

Malaysia’s Hanizam Bin Hamzah finished on the podium after beating Robbie Nishida of the USA in a tight battle for third place.On the local front, only Singapore’s Jansen Tan advanced to the Round of 16 after beating Malaysia’s Rocker Loh Swee Hwa. However, he had the unenviable task of going against a one of the event favourites Ken Gushi in the Round of 16 where the American star flexed his muscles to seal his spot in the top eight.

Speaking after his run, Tan said: “I am definitely happy to have made it to the Top 16. At the first leg held in Malaysia, I had a lot of problems with my car. So having managed to address these issues and do well on my own home ground, it was a great result. The home crowd was absolutely fantastic and I am thankful to hear their applause and support throughout my runs.”

The Achilles Formula Drift Singapore 2012 also saw Team USA comprising of Ken Gushi and Robbie Nishida winning the first ever Canon Nations Cup in Singapore ahead of Daigo Saito and Manabu Orido from Team Japan. Singapore’s duo of Jansen Tan and Ivan Lim finished in third place to close out a very successful second leg of the Asian Drift Series 2012.

The Achilles Formula Drift Series will now move on to the third leg of the series in Bangkok, Thailand with the final leg set to take place in Jakarta, Indonesia where stars like Saito, Orido and Nishida are set to thrill the drift fans once again with some pulsating drift action.