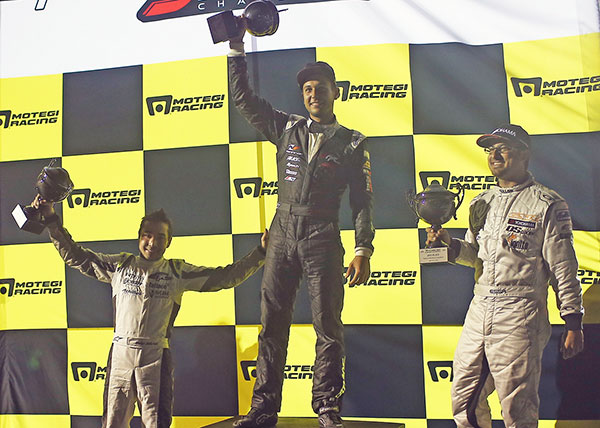 The inaugural Motegi Racing Super Drift Challenge brought motorsports action under the lights for the first time in 39 years during the annual Toyota Grand Prix of Long Beach. Sixteen of the top Formula DRIFT drivers competed for a $25,000 prize purse.

“To have been able to bring professional drifting competition to the masses during the 39th annual Toyota Grand Prix of Long Beach is remarkable,” stated Jim Liaw, president and co-founder of Formula DRIFT. “To do it for the first time under the lights of the famous Long Beach street course is something special.”

The action under the lights gave a new dynamic for the drivers with ever changing track temperatures along with the plumes of white smoke under the fluorescent lights proved to be challenging. Fredric Aasbo in the Hankook Tire Scion Racing tC in the Final 4 battle hit the outside of clipping zone 2 damaging his vehicle and failing to continue in the competition taking home fourth place. Walker Wilkerson in the Achilles Radial / Fueled Racing Nissan S14 automatically took the third spot with Aasbo out in the Top 4. Powers battled the number one qualifier Michael Essa in the GSR Autosport / Yokohama Tire BMW M3 in an exciting Finals match and edged out Essa to take home the inaugural victory.

“The final battle with Essa was super sick,” stated Matt Powers, winner of the Motegi Racing Super Drift Challenge. “I would have been happy with second place, but am stoked and looking forward to the rest of the season.”

The Formula DRIFT Pro Championship presented by GoPro continues at Round 2: Road to the Championship at Road Atlanta on May 10-11, 2013.