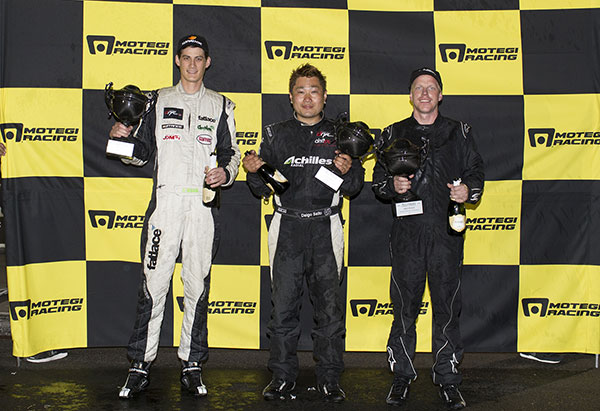 The Motegi Racing Super Drift Challenge for the second consecutive year brought motorsports action under the lights during the annual Toyota Grand Prix of Long Beach with a filled capacity within Turns 9, 10, and 11 of the famous street course. Sixteen of the top Formula DRIFT drivers competed for a $25,000 prize purse. Eight vehicle manufacturers and seven tire companies were represented in the competition.

“It is an honor to be able to bring drifting to the masses during the 40th annual Toyota Grand Prix of Long Beach,” stated Jim Liaw, president and co-founder of Formula DRIFT. “And to be able to showcase our sport for the second year in a row under the lights on the city streets is something special.”

The action under the lights along with ever changing track temperatures proved to be a test of driver skill. Number one qualifier, Forrest Wang in Get Nuts Lab / Hankook Tire Nissan S14 finishes in third place. Daigo Saito met teammate Kenny Moen in the Bridges Racing / Achilles Radial Nissan 240SX in the finals. Saito, the 2012 Formula DRIFT champion, was able to edge out Moen to take the victory. For the second consecutive weekend, Moen takes the second spot on the podium.

“Last weekend at Round 1 of Formula DRIFT was no good for me, but this week with a few modifications on the vehicle I was able to get the win,” said Daigo Saito, winner of the Motegi Super Drift Challenge. “I am happy with the win and look to continue the momentum into the next round.”