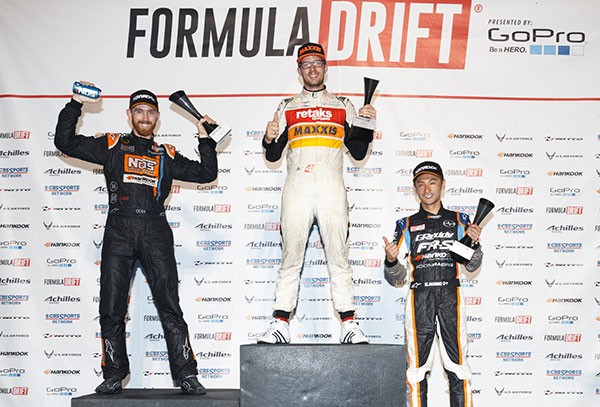 Round 3: Unchartered Territory lived up to its moniker as the Series entered Orlando Speed World for the first time. 637,000 viewers tuned into the Driftstream during the weekend and were not disappointed. Despite the inclement weather, the action on track was very competitive. The new track would prove to be challenging even for the most seasoned of veterans.

“We were happily surprised with the at capacity crowd attendance for our first time at Orlando Speed World,” says Jim Liaw, President of Formula DRIFT. “Florida has always been a key demographic for the Series and now I think we have found a sweet spot in Central Florida.”

The event was full of upsets and surprises. The semi-finals was a rematch from the last event with defending champion, Chris Forsberg in the NOS Energy Drink / Hankook Tire Nissan 370Z and Ken Gushi in the GReddy Racing / Hankook Tire Scion Racing FR-S going head to head. On Forsberg’s lead run contact was made that was ruled to be Gushi’s fault giving him a zero. During the same run, but unrelated to the cars’ contact, Forsberg’s vehicle caught on fire which forced Forsberg to utilize his fire suppression system. That then led to his car being non-operational from that point forward. Forsberg was awarded the win over Gushi and was set to meet Tuerck in the Finals, but unable to continue through the competition due to the complications with his car, Forsberg was forced to bow out giving Tuerck the victory to move him into second place in the standings. Gushi moves up to fourth place and Forsberg into third place overall while securing both their second consecutive podium finishes.

“The weekend had its ups and downs. We barely moved on in the Top 32 and then moved on against Yokoi when his car caught on fire. The only battle we then had was in the semi-finals against Matt Field. Then against Forsberg’s car caught on fire and he couldn’t continue and I got the win on a technicality,” said Ryan Tuerck, winner of Round 3: Unchartered Territory. “A wins a win. Thanks to my team they worked hard regardless and it feels good to secure a little bit of a points gap.”