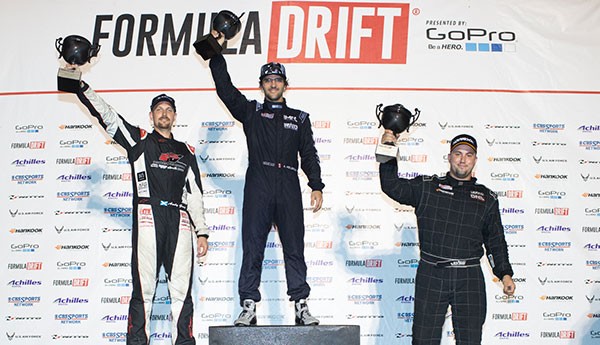 Long Beach, Calif. – June 5, 2015 – Formula DRIFT PRO 2 began the season at Orlando Speed World with the first of four rounds of competition. Alex Heilbrunn in the IMR BMW 3-Series takes the victory and the lead in the standings.

PRO 2 kicked off the season with the first event at Orlando Speed World. This marks the first PRO 2 event to be held at the venue.

“In its second year, PRO 2 has proven to be a great way for drivers to get acclimated to the tracks and the level of competition,” says Jim Liaw, President of Formula DRIFT. “Alex Heilbrunn is a great example of an international driver, hailing from Lima, Peru, who made his way through the Pro-AM Series and now has found success in PRO 2.”

Heilbrunn met Andy Gray in the DriftEbisu.com / Achilles Tire Toyota Chaser, a regular of Formula DRIFT Japan, in the Finals. Heilbrunn remained consistent throughout the night and out drove his opponents to gain his first victory in Formula DRIFT PRO 2 and gain the lead in the standings in the first of four events for the season. Rounding out the podium was Jeff Jones in third place in the DNA Motoring Nissan S14.

“We are super excited to be here at Formula DRIFT PRO 2 for the first time,” said Alex Heilbrunn, winner of Round 1 of 4 events of PRO 2 Championship. “We qualified first and got the win, so it was a perfect weekend for me. I want to thank my team and everyone that made it possible.”