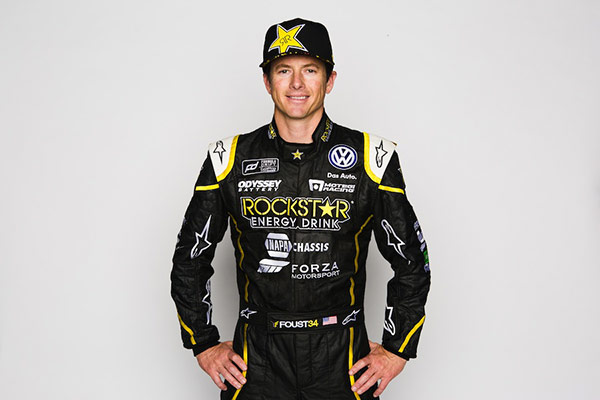 LOS ANGELES, Calif. (February 23, 2015) – Rockstar Energy Drink driver Tanner Foust will make a return to Formula Drift competition for three rounds this season as part of a stacked schedule that will see him challenge for the Global Rallycross Championship title while also racing in select stops of the FIA World Rallycross Championship, Formula Drift and the Lucas Oil Off Road Racing Series.

“My competition focus is on winning the Global Rallycross Championship for Volkswagen in 2015 but I’m also excited to be able to get back into drifting,” said Foust, whose last Formula Drift competition was the 2010 season-ender. “The fans, the tracks, and the driving in Formula Drift are really something unique in the world of motorsports and I’ve missed being part of it.”

Foust’s first Formula Drift competition of 2015 will take place at the season opener, Streets of Long Beach, April 10 and 11. There, he will debut a brand new drift machine: the 900 horsepower Rockstar Energy Drink Volkswagen Passat.

“I think it is safe to say, the return of two-time FD champion Tanner Foust highlights the most anticipated Formula DRIFT season to date,” said Ryan Sage, series co-founder. “Some of the best battles in series history have featured Tanner and our fans are going to be thrilled to see him back in the mix in 2015 in a brand new Rockstar Energy Drink machine.”

The two-time series champion is also slated to compete in Atlanta in the Road to the Championship, May 8-9, and at the season-ending Final Fight in Irwindale, Calif., October 9-10.

It is a much-anticipated return to drifting for Foust, who is the only driver ever to win back-to-back Formula Drift championships (2007 and 2008). He scored the runner-up position in 2010, his last season of Formula Drift competition. More details on the 2015 Rockstar Energy Drink Volkswagen Passat drift car will be available in the coming weeks.

“I’m going back to my roots with drifting, racing in rallycross, scraping the rust off some road racing skills, and continuing to learn more about off-road racing,” said Foust. “For me, it’s important to stay in touch with these different disciplines — especially as I’m working with Volkswagen on developing some exciting new project cars.”

Foust debuted the first of these projects, the RAUH-Welt Begriff Volkswagen Beetle, at SEMA last season.

The Rockstar Energy Drink driver recently appeared with Volkswagen at the Chicago Auto Show to confirm plans to return to Global Rallycross (GRC) for a second full championship season with the Volkswagen Andretti Rallycross (VARX) team, alongside teammate Scott Speed. The team is also expected to return to X Games in Austin this summer when the action sports festival returns to Circuit of the Americas June 4-7.

Foust will also make a return to the FIA World Rallycross Championship for four stops this season with Sweden’s Marklund Motorsport team. The versatile driver is also planning to appear in the Lucas Oil Off Road Racing Series for a select campaign of events in the in the Pro-2 class.

In addition to his competition career, Foust is also a stunt driver and television personality. He is one of the hosts of Top Gear, airing on the HISTORY channel, and new episodes of his documentary series Life in the Foust Lane are coming soon to the Rockstar Energy Drink YouTube channel at: www.youtube.com/RockstarEvents

ABOUT TANNER FOUST
Tanner Foust is a versatile and multi-talented driver known for his supreme car control and a proven track record of podium placements, national championships and world records. He is a three-time U.S. rallycross champion (2012, 2011, 2010) who has also won four X Games gold medals (2013, 2010, 2007), and two Formula Drift championships (2008, 2007).

He has also held multiple world records including for the astonishing Hot Wheels Double Loop Dare, which saw Foust drive a car through a 66-foot loop-the-loop. He also scored the indoor speed record for TV’s Top Gear USA, and set a distance jump record with Hot Wheels when he made a 332′ ramp-to-ramp leap in a truck at the Indy 500.

A dominant driver in the sport of rallycross, Foust is the only American driver ever to win a round of the FIA World Rallycross Championship. He made his rallycross debut overseas in 2010 with a select campaign and finished both 2011 and 2012 ranked in the top three. At home, Foust has been a leading driver in the sport since it was first introduced to the United States in 2010, and in 2014 won the New York round of the Global Rallycross Championship for the new Volkswagen Andretti Rallycross team.

When he isn’t racing, the professional driver also performs in films and on television. He is an on-air host for the U.S. version of the seminal BBC auto show Top Gear, produced by BBC Worldwide Productions and airing on the HISTORY channel. Episodes of his online documentary series, Life in the Foust Lane, are available on the Rockstar Energy Drink YouTube channel.

Foust also handles stunt driving in numerous popular films, TV shows and commercials. He is featured as a stunt driver in the Need 4 Speed film, as well as other major releases including the Bourne Legacy, Bourne Ultimatum, Fast and Furious: Tokyo Drift, Dukes of Hazzard, Red Dawn and Iron Man 2 movies.