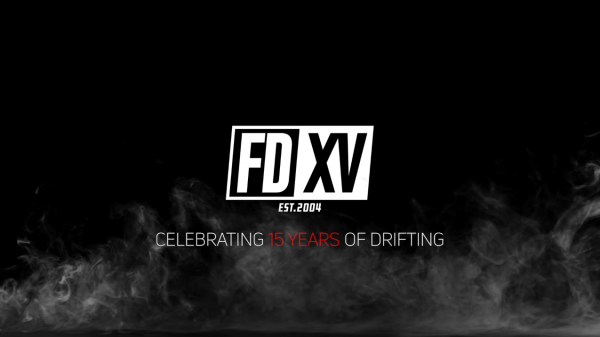 Rounding out its fifteenth and most exciting season, Formula DRIFT is releasing six videos in the lead up to the 2018 Finals at Irwindale Speedway this weekend.

FDXV – 15 Years of Drifting looks back through the history of the series with its founders and the four drivers who have competed in Formula DRIFT from day one. Each video will be released on the Formula DRIFT Youtube Page at youtube.com/formuladrift

The video series kicks off today with two videos from the series founders, Jim Liaw and Ryan Sage. They will be posted at 12PM PST and both look at the highs, lows and personal experiences of the people who have guided the series to its premier world status.

Tuesday will see the release of Ken Gushi’s video, where he will share his milestones and the challenges he’s faced in the past 15 years. That will be followed on Wednesday by 2011 FD Champion, Dai Yoshihara, who will reflect on a life behind the wheel. Thursday will shine the spotlight on 2010 FD Champion Vaughn Gittin Jr, while the series culminates on Friday with 2009, 2014 and 2016 FD Champion Chris Forsberg – the most successful FD driver to date and somebody with many great memories.

Each new video will be released at 12PM PST during the count down to the Final event at Irwindale Speedway where the Pro and Pro 2 Driver’s Championships will be decided, as well as the Tire Cup winner, with Toyota already claiming the Auto Cup at the previous round in Texas.

Formula DRIFT is recognized as the leading international drifting championship. Established on the streets of Japan, drifting has evolved into a worldwide competitive sport that challenges each driver’s ability and control. Formula DRIFT provides a series for professional drifters to compete nationwide for the coveted Formula DRIFT Championship. As the first official drifting series in North America, Formula DRIFT has taken competitive motorsports to the extreme, attracting drift fans and car enthusiasts from all walks of life, and established itself as the global leader for the sport.

Formula DRIFT has the most viewed livestream in the world, catering to more than 2.5M fans annually. The series is also featured on CBS Sports in the USA and distributed globally by IMG Media, reaching over 400M households. CBS Sports Network is available across the country through local cable, video and telco providers, and via satellite on DirecTV Channel 221 and Dish Network Channel 158. For more information, including a full programming schedule and how to get CBS Sports Network, visit cbssportsnetwork.com

For a competition schedule and ticket information, visit formulad.com