IRWINDALE, California (October 10, 2018) – Fredric Aasbo is ready for a full-throttle battle at the House of Drift this weekend as the Formula Drift Championship returns home to Irwindale Speedway for its thrilling season finale.

“Irwindale is my favourite event of the year when it comes to the atmosphere at the track. It’s a hallowed place,” said Aasbo. “Ever since I was a kid growing up watching Formula Drift from my home in Norway, this has been the event where dreams come true.”

The driver enters the final round challenging for the title in the Rockstar Energy Drink / Nexen Tire Toyota Corolla Hatchback. He sits 49 points behind defending champion James Deane. Aasbo has seen success at Irwindale Speedway, winning a perfect event there in 2015 to clinch the championship title that season. He heads into the final round prepared to put it all on the line once again.

“The track has a strange flow to it and really gives me goose bumps,” said Aasbo. “The banking is high and steep and has a lot of grip, but the transition and infield is very slippery. Driving clean becomes a real challenge.”

In the advance-or-be-eliminated world of Formula Drift, Aasbo is gunning for another perfect event with his sights set on top qualifier and the overall victory. If he succeeds, and Deane is eliminated in the Great 8, Aasbo can claim the title for a second time.

“We’re setting out to win the event and will let the championship points fall where they may,” said team owner Stephan Papadakis. “We’ve already had a stellar year, with two wins this season in a brand new car and being in contention for the championship. Our success comes from working with great partners like Rockstar Energy Drink, Toyota and Nexen Tires.”

Aasbo was the top scorer for Toyota this year in the Auto Cup, with the marque locking in the manufacturer’s championship at their home round last month in Texas. 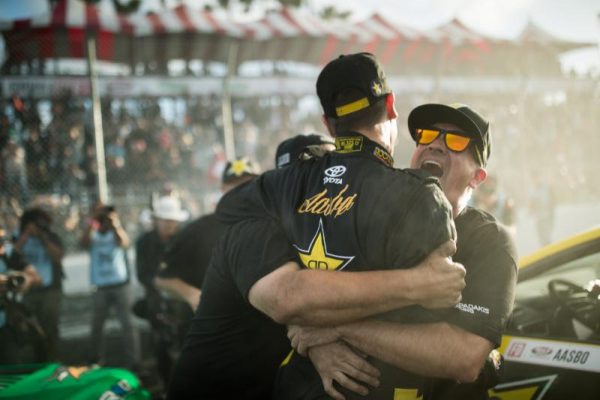 It was a win for Fredric Aasbo at the first round of competition this season in Long Beach. The series returns to California for its exciting finale Friday and Saturday at Irwindale Speedway.