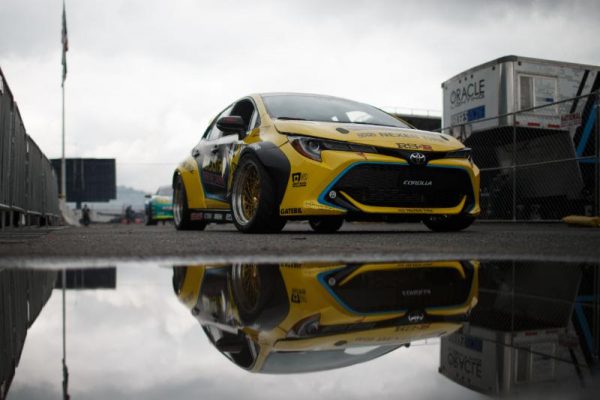 MONROE, Washington (July 19, 2018) – Formula Drift star Fredric Aasbo is in the Pacific Northwest this weekend ready to start the second half of the 2018 Formula Drift season with a performance that he hopes will vault him into the championship lead.

“We’ve had a great start to the season: maybe our best,” said Aasbo, who landed three podiums, including a victory, in the first half of the season. “At the same time, our competitors have really stepped it up. It’s going to be a wild showdown.”

Aasbo is looking forward to another weekend of close matches on the Evergreen Speedway oval. He considers the Seattle track one of his favourites and finished second here last year after a tight final battle with rival James Deane.

And as he and the Papadakis Racing team start their battle at Evergreen Speedway, they are sharing an inside look at the engine that powers the 1,000 horsepower Rockstar Energy Drink / Nexen Tire Toyota Corolla Hatchback that brought them their first victory of the season at Round 1.

Aasbo dominated the first half of the 2018 season until an error at the Wall, New Jersey, event knocked him out of the championship lead to a close second in the point standings. During the six-week midseason break, he returned overseas to battle it out on the European drift circuit and won four major events. He said he is ready to bring the momentum to this weekend’s contest, where precision will be paramount.

“Timing in the transitions at this event is really difficult,” said Aasbo. “The long right-hand corner to start can make the transition into the second and third corners a real challenge. Our new Corolla has proven really competitive, so I am confident we can really perform.”

Weather often plays a role at this round, with traction challenges posed by rain characteristic of the region. The forecast shows cool temperatures and a mix of sun and cloud but in the tight quarters between the Pacific and the mountains, conditions can change quickly.

Papadakis Racing enters this round after a mid-season vehicle refresh. The Rockstar Energy Drink / Nexen Tire Toyota Corolla Hatchback returned to the team’s Southern California home for upgrades to incorporate into the new car the lessons learned in the first half of the season.

“We know we have a car that can win events,” said team owner Stephan Papadakis. “Our focus is on staying consistent with the performance of the car. We need to do everything we can to help Fredric be even more comfortable with the way the car drives.”