With a record of six podiums, including two wins, Aasbo was the top-performing Toyota driver in the series this season, helping to lock in the 2018 Auto Cup for manufacturers.

“I’m proud of the whole team,” said Aasbo. “We’ve gone out of our comfort zone this year and to finish this well in a brand new build tells you just how good a car the Rockstar Energy Drink / Nexen Tire Toyota Corolla Hatchback is.”

The thundering crowd at the House of Drift was treated to some of the best drifting in series history over the weekend, with the final match between Aasbo and Vaughn Gittin Jr. so close the judges called for two One More Time re-runs. The champions put on an escalating demonstration of commitment and precision until a wall tap in the sixth and final head-to-head run forced a course correction from Aasbo. The driver finished second and ended the season just four points shy of the title.

“Of course we wanted that win but you have to hand it to all the drivers this weekend. The level of skill we saw was next level,” said team owner Stephan Papadakis. “The fans were the real winners here at Irwindale.”

The season saw Aasbo win the season opener in the debut event for the brand new Rockstar Energy Drink / Nexen Tire Toyota Corolla Hatchback and score a perfect event in St. Louis, claiming the top qualifying result and running the ladder all the way to the top step of the podium at a brand new track for the series. He claimed second in Atlanta and Irwindale and took third at the championship stops in Texas and Orlando. Aasbo is the most winning driver in Formula Drift history, with 12 career victories.

“To be battling for the title all the way to the final match of the final event of the season exceeded our expectations,” said Papadakis. “Working with Rockstar, Nexen, Toyota, and all of our partners gives us the equipment and support we need to be successful, Fredric’s driving record is the best in the series, and I’m proud of the whole team for their hard work this season. I’m excited for where we can take this next year.”

At the season-ending awards banquet Sunday night, Aasbo accepted the second-place cup in the driver’s championship. Toyota Motorsports Marketing Planner Darren Rogado accepted the manufacturer’s plaque on behalf of Toyota, while Tire partner Nexen was second in the Tire Cup. Papadakis earned the Team Manager of the Year award.

Following a successful Facebook Live event for Battle of The Shops on Monday, the team is now preparing for a trip to Las Vegas with Toyota for the annual SEMA trade show in Las Vegas. 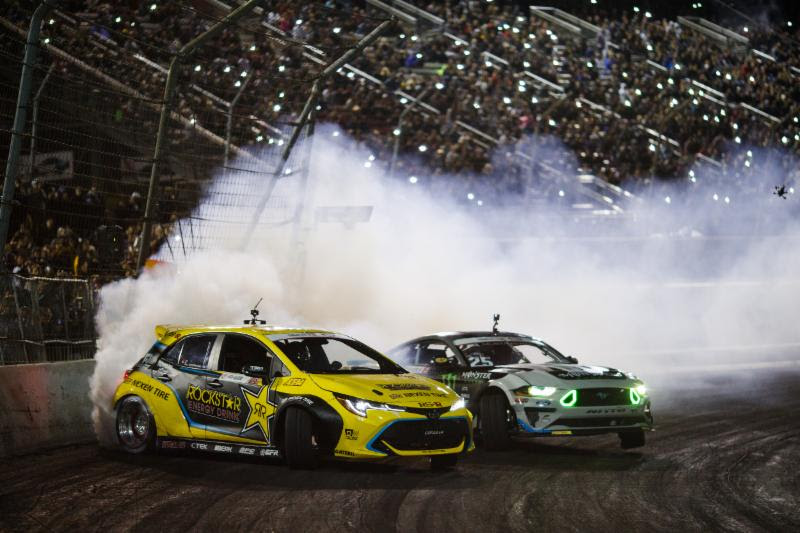