As the traditional end to the Formula DRIFT season, the series organizers held their annual Awards ceremony the evening after the thrilling finale at Irwindale Speedway. It gives drivers and teams a chance to honor the top drivers, rookies, fan favorites and the people who play important roles behind the scenes in both the Formula DRIFT PRO and PRO2 categories. Formula DRIFT also wants to thank all the event staff, media and fans for supporting the series throughout the year 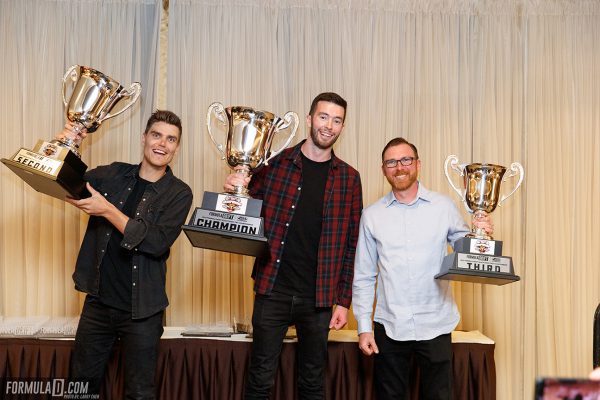 Here are the awards for outstanding performances:

MOST IMPROVED DRIVER
Based on a comparison of his results from 2018 to 2019, Ryan Litteral won the award by virtue rising 13 places – he finished 32nd in 2018 and reached 19th this year

COMEBACK OF THE YEAR
Presented to the driver who has the biggest jump from event qualifying to finishing position, the award went to Ryan Tuerck after qualifying 29th at FD Texas and finishing in 8th place – an improvement of 21 places

HARDEST CHARGER
Awarded to Piotr Wiecek for being the driver who put it all out there, on every run, in every battle throughout the 2019 season

SPIRIT OF DRIFTING
Pat Goodin was voted by his peers as the driver who best represented the sport of drifting during 2019 with his tenacity, professionalism and positivity

PERFECT EVENT AWARD
Presented to the driver who qualified first and won the event – for the first time in FD history it went to three recipients: Fredric Aasbo at FD Atlanta, Piotr Wiecek at FD Seattle and James Deane at FD St Louis

SPOTTER OF THE YEAR
Voted for by FD hardcard holders, Renee Burkett from RAD Industries won this accolade for assisting husband Dan at each round

CREW CHIEF OF THE YEAR
Also voted for by hardcard holders, the award went to Tony Clark from RTR

COMEBACK OF THE YEAR
Josh Robinson advanced 14 places at FD Atlanta, qualifying 15th and going on to win the event

NEXT SEASON
The schedule for the 2020 Formula DRIFT Black Magic Pro Championship and the Formula DRIFT Link ECU Pro 2 Championship will be announced at SEMA 2019 and posted to formulad.com – all media registered for SEMA are invited to attend the press conference.