The first event of the 2019 Formula Drift season was not a fun one for Ryan Tuerck. After qualifying seventh in Long Beach, Tuerck’s Toyota GT86 had a major collision with the wall in practice, damaging the chassis beyond repair. 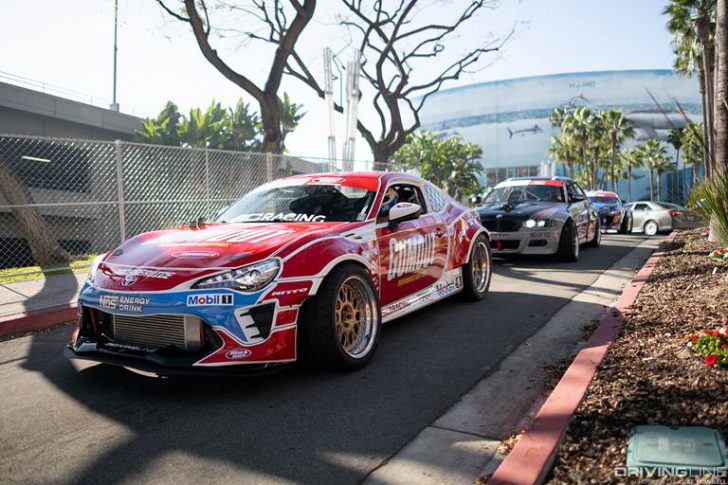 Once the event was over, Tuerck and his team frantically began to upgrade his GT86 “street car” that he made for drift demos into his new competition car. Everything had to be finished in less than two weeks in order to ship the car cross-country to Formula Drift Orlando and make the competition. While the new chassis was completed in the nick of time, it took an additional event to get the car back to the competitive level of the previous chassis. With five events left in the Formula Drift season, Tuerck should be considered as much of a championship threat as ever!

The Thrash
After the Long Beach event ended, Tuerck and his team evaluated the car and found the damage to be too much to repair. Despite hitting a tire wall that drastically reduced the force of the collision, the transmission tunnel had been compromised and the front driver’s side suspension mounting points had shifted several inches. While a repair might have been possible, there was too great a risk of the chassis’ integrity being compromised to make it a good idea. Tuerck originally built this chassis for the 2013 season, which marks six full seasons of competition, making it the longest running chassis on the Formula Drift grid. Retiring the car was probably slightly overdue, but Tuerck’s continued success made that decision hard. This final hit was the push that the team needed to move on to a newer, straighter chassis. 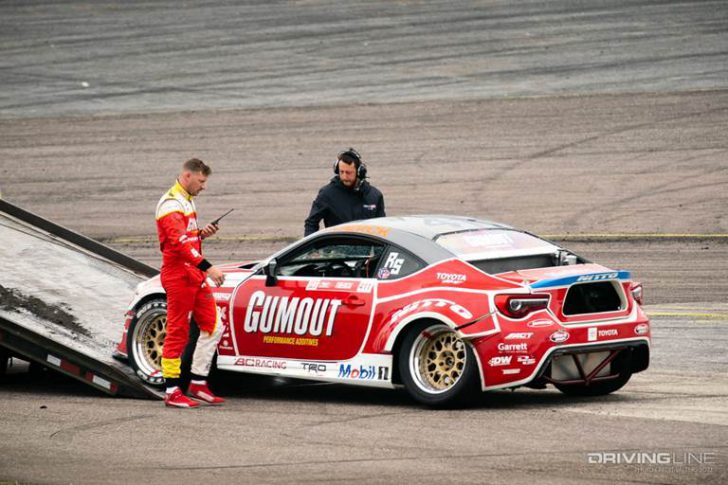 As we mentioned in our Formula Drift Orlando recap, Tuerck wasn’t even allowed to do much of the work due to suffering a concussion in the wreck, and thus had to rely on his team to do most of the heavy lifting.

Orlando Was Good, Atlanta Was Great
Formula Drift Orlando was a good shakedown run for Tuerck and the team. “Even though the car uses all of the same parts as the last car, it still feels like a different car,” said Tuerck after his initial shakedown in Orlando. 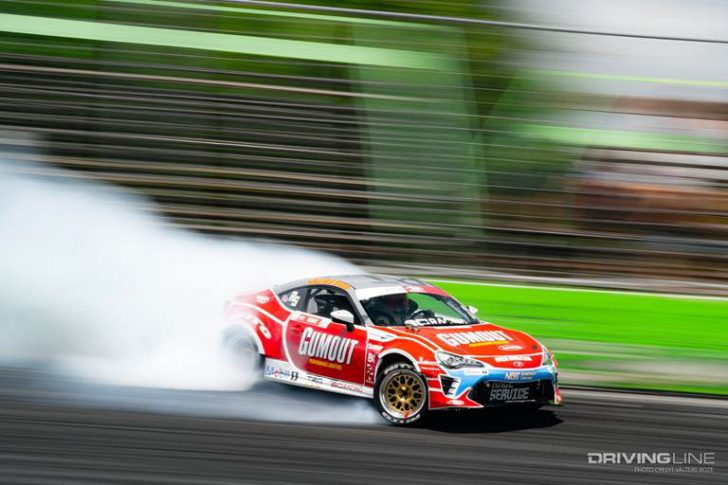 Tuerck put down a 95 point qualifying run, which only slotted him into 15th place overall. In the tandem competition, he lost a tough battle with Dai Yoshihara in the Top 16 round but was ready to improve on those results in Atlanta. 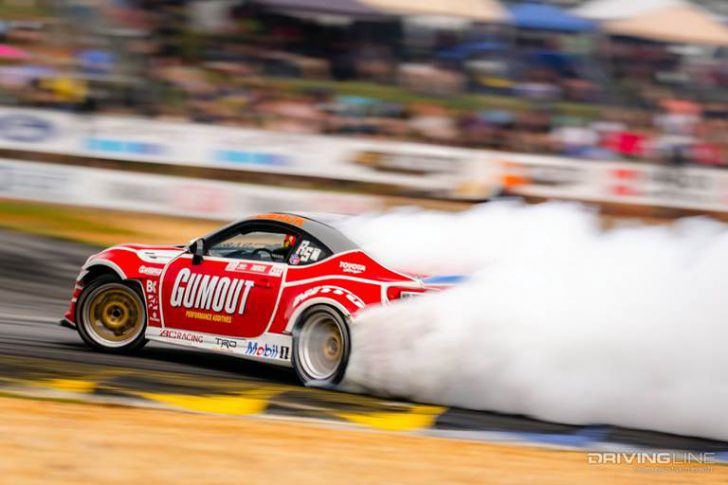 With several more practice sessions (and several more Nitto tires burned up), Tuerck laid down a 97 point qualifying run during the Road Atlanta qualifying session, which slotted him into third. 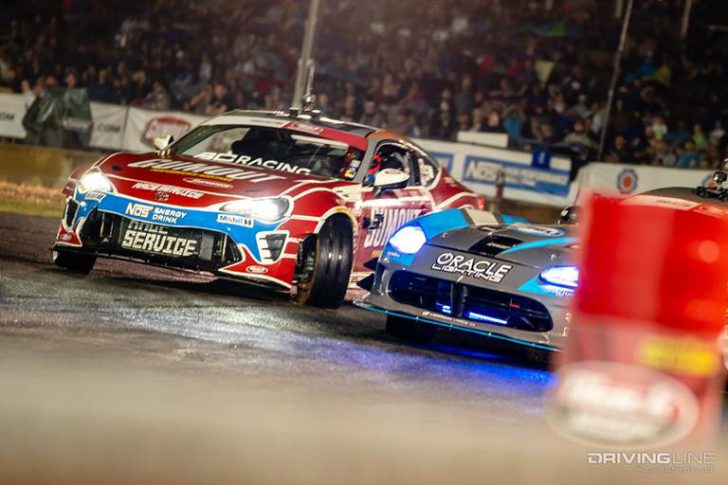 While he was outgunned by Fredric Aasbo, who took the top spot, and his Nitto Tire teammate Chelsea DeNofa, who took second, Tuerck was getting more and more comfortable in the newly-assembled chassis.

In tandem battles, Tuerck rose to the occasion on his Nitto NT555 G2s. After taking out Brazillian rookie Joao Barion in the Top 32 and Dean Kearney in the Top 16, Tuerck was able to defeat Worthouse Drift driver Piotr Wiecek in the Top 8 after a tough battle and also took out Michael Essa in the Top 4. 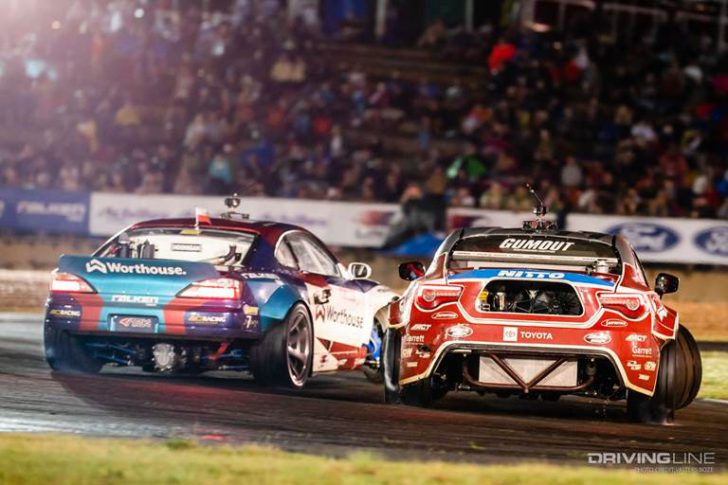 Facing his first final round of the season, Tuerck was up against top qualifier Aasbo. While he didn’t earn the victory, he was glad to return to the podium for the first time since Evergreen Speedway last season.

In the tandem battles, three of the five Nitto Tire drivers won their first tandem battles, with Gittin Jr. taking out Ken Gushi, DeNofa taking out Reeder, and Tuerck taking out Barion, as previously mentioned. Heilbrunn fell to a fellow BMW in Michael Essa. Both Ford Mustang RTR drift cars didn’t escape the Top 16 tandem round as Gittin Jr. fell to Chris Forsberg and DeNofa fell to Pat Goodin, but Tuerck’s second place finish was the shining moment for the Nitto Tire drivers. Defending champion James Deane rounded out the podium, making Tuerck the only American in the awards ceremony.

DeNofa, Tuerck and Gittin Jr. are now 7th, 8th and 10th in the championship standings respectivey, just 119 points/120 points/124 points behind Bakchis. With five events remaining, all three should still consider themselves to be championship contenders. Heilbrunn sits in 17th place and will be looking to return to the podium for the first time since 2017, while Reeder leads the Rookie of the Year points chase in 20th position. The next round on the 2019 Formula Drift championship calendar takes place at Wall Speedway in New Jersey, which is known to be rough on cars and tires.