When Travis Reeder and the Napoleon Motorsports team pulled into Long Beach, California last week, they were excited to embark on a whole new adventure. For Travis Reeder, coming off of his Formula Drift Pro 2 championship in 2018 and making our “top drivers to watch” list entering 2019, he knew the step up to the top Pro class of Formula Drift would be challenging. For Napoleon Motorsports, who cut their teeth in the Trans Am series, venturing into Formula Drift would be a whole new motorsport series to learn and master. For both driver and team, hopes were high on debuting their new Chevrolet Camaro EL1, the first drift car powered exclusively by electric power in Formula Drift. 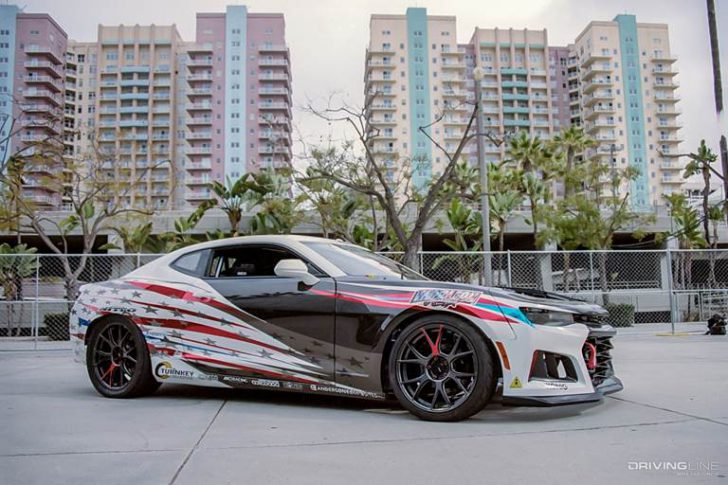 Unfortunately, the car would have to wait until the second event of the season to formally debut the car as fire safety teams would prevent the car from turning a tire on the famed Streets of Long Beach course, but Reeder and the Napoleon Motorsports team would still have a successful debut via their backup plan.

Pre-Race Hype
The paddock was abuzz at the Streets of Long Beach course, which takes over actual city streets in downtown Long Beach, California, as the team unloaded their Chevrolet Camaro EL1 on media day Tuesday leading up to the race weekend. The car, which was built to the strict FIA Formula E specifications for safety, cooling and fire containment, passed Formula Drift’s technical inspection with flying colors. Driving on Media Day is reserved for drivers who have previously competed on the Streets of Long Beach, so Reeder would have to wait to make his Formula Drift debut until Friday morning. As the hype around the electric-powered drift car spread through the paddock and the internet, a different kind of buzz started to build from the fire safety team. 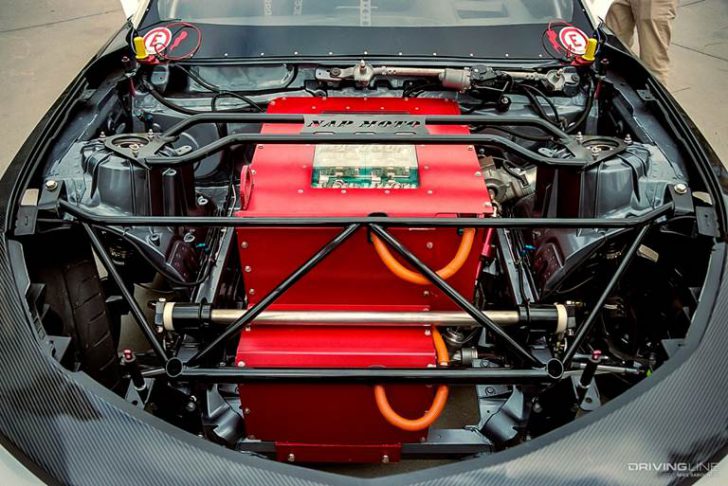 Electric cars are still very new to public streets, popularized in recent years by Tesla and other electric vehicle manufacturers, but even newer to motorsports. While the FIA Formula E series raced on the same city streets of Long Beach in April of 2015 and 2016, the series hadn’t returned for three years, and it seemed as though if any city would be welcoming of an electric-powered drift car competing alongside traditional combustion engines, it would be Long Beach. However, the fire safety teams from the city and the Acura Grand Prix of Long Beach declared that they didn’t have enough time to train on the safety of the car in the event of an emergency and asked the Napoleon Motorsports team to park the car for the weekend. Thankfully, Joe Napoleon and the Napoleon Motorsports team had packed a backup plan in their team trailer—just in case. 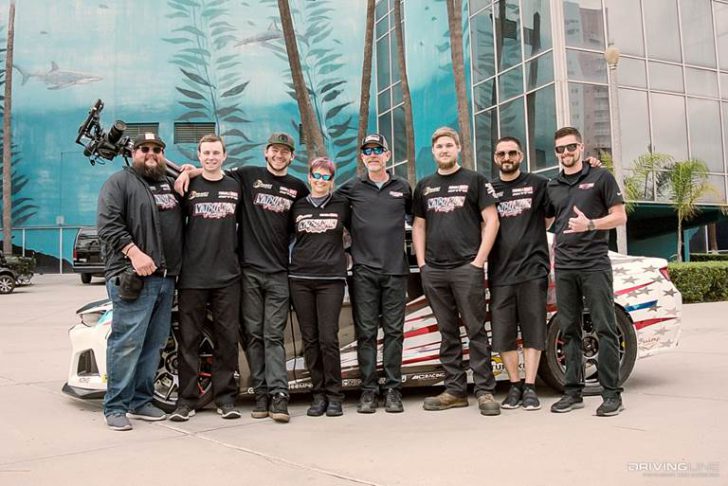 “We were disappointed with the decision, but understand that safety is everyone’s primary concern and respect the decision that was made,” said team manager Joe Napoleon. “We overbuilt the car with several additional safety features including an auxiliary battery cooling system and an additional fire suppression system specifically for the batteries in case of an emergency. We followed the FIA Formula E rulebook, but at the end of the day, we will move forward with our plan B, and you’ll see us competing this weekend,” Napoleon told us on Thursday evening, prior to qualifying.

Friday Qualifying
Travis Reeder’s 2018 Formula Drift Pro 2 Championship-winning Nissan S13 was prepped at the Napoleon Motorsports facility in Texas during the offseason, with several key updates to the chassis in preparation for the next tier of competition. Formula Drift’s Pro 2 series is limited to two specific tire manufacturers and a maximum tire width of 255mm, but the top Pro series has four tire manufacturer choices and is only limited in tire size based on the weight of the car. During the off-season, Reeder’s S13 was put on a 150 lb diet and sized up for a 275/40/18 Nitto NT05 tire. Thanks to the experience of Nitto Tire consultant and famed motorsport icon Ron Bergenholtz and the rest of the Napoleon Motorsports team, Reeder was able to extract the most grip out of the Nitto NT05 tire over the course of the weekend. Several strategic suspension upgrades were also implemented to keep the chassis competitive, and Reeder used the upgrades to lay down a qualifying score of 84 points. That was good for the 19th position, top amongst the 2019 rookie class, but his first round Top 32 tandem battle would be against fellow Nitto Tire teammate and 2015 Formula Drift Pro 2 champion Alex Heilbrunn. 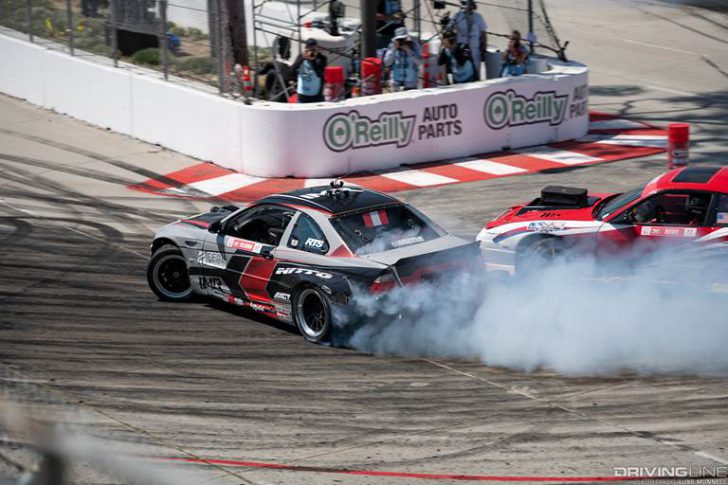 Saturday Tandem Battles
Reeder earned the victory against Heilbrunn due to a spin just prior to the final hairpin turn of the Long Beach course and would face European champion and rising Formula Drift star Piotr Wiecek in the Top 16. While Reeder didn’t earn the victory against the more experienced Wiecek, who finished last season third in points, he definitely gave Wiecek a run for his money. Even Formula Drift commentator Ryan Sage was impressed with Reeder’s run, asking “Are you kidding me?!” as the run finished up. The grip and setup of Reeder’s car were dialed in just right, allowing him to keep up with Wiecek despite having around half the horsepower of the defending series bronze medalist. 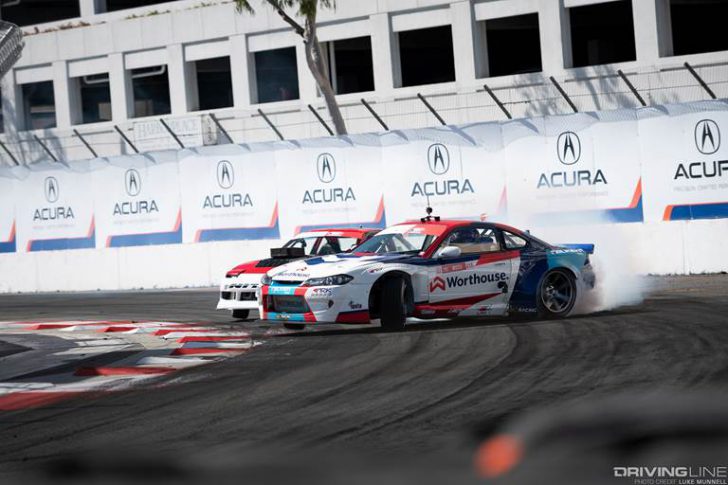 The event would be won by Odi Bakchis in his Feal Suspension Nissan S14, with Forrest Wang taking second place in his Get Nuts Lab Nissan S15 and Chris Forsberg rounding out the podium in his NOS Energy Drink Nissan 370Z. 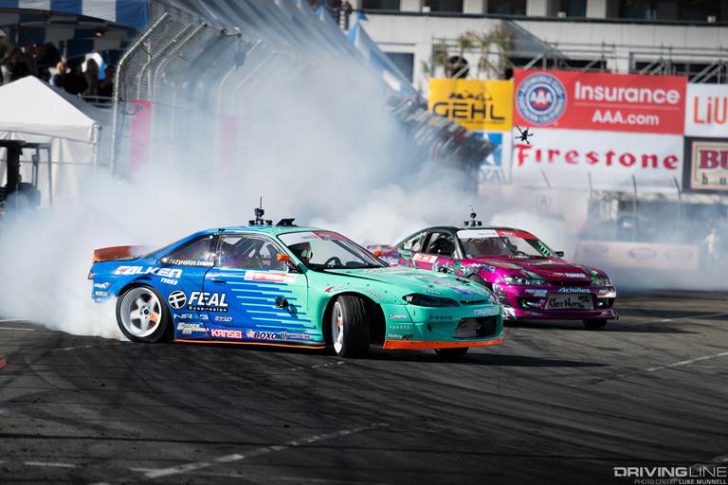 Both members of the Nitto Tire Ford Mustang RTR team would finish in the top 16 with Chelsea Denofa qualifying in 9th place and losing to Forsberg in the Top 16 round, while Vaughn Gittin Jr. qualified 11th but lost to Wang in the Top 16. 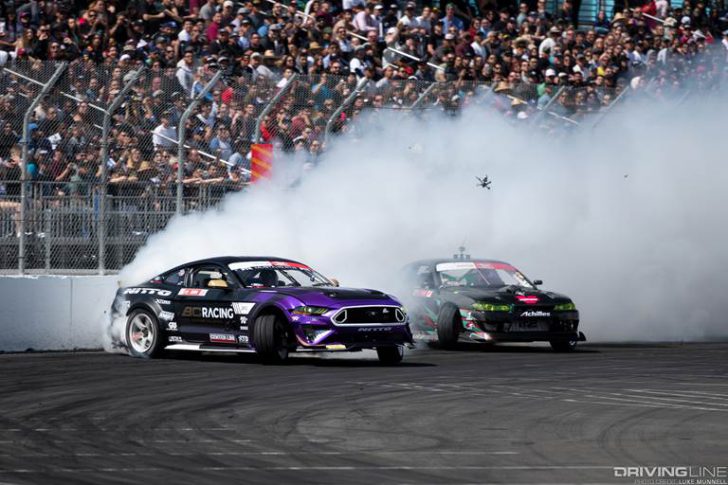 The final Nitto Tire driver, Ryan Tuerck, suffered a major crash in the final run of Saturday morning practice after qualifying seventh and was unable to make repairs to his Toyota FT86 prior to his Top 32 tandem battle.

Looking Ahead
“This was a great weekend for Travis and our team,” said Napoleon. “We’re bummed we couldn’t debut the Camaro, but we’re very happy with the finish in our inaugural event. The fans really embraced us and the innovation we are bringing to the Formula Drift grid, and we’re looking forward to debuting the car in Orlando. We’ve already started talking to the Orlando Speedworld officials to get them prepared for the car, and we’re confident that everyone will be ready for our debut at the next round.” 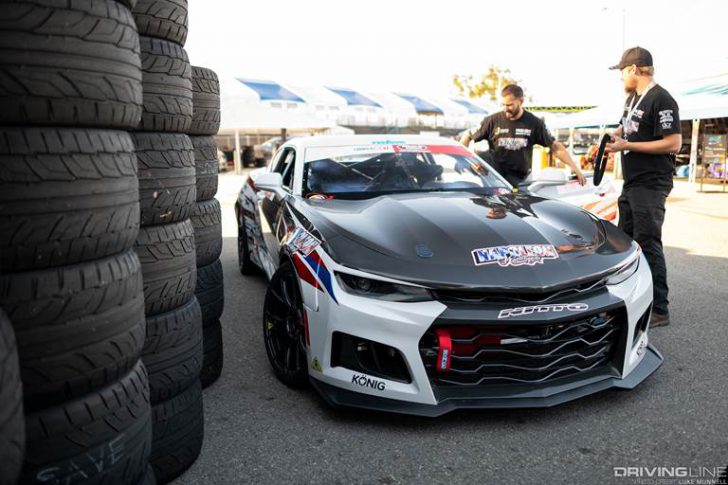 In a hint of what might be coming in future iterations, Napoleon suggested that this Formula Drift season is a test bed for future motorsports. “Drifting is a perfect sport to help us develop and push the boundaries of electric vehicle racing. Right now, the technology and capabilities of electric vehicle technology is a perfect fit for drifting because of how long the laps are and the downtime between runs, but we plan to move into other applications of the EV technology.”

The second stop of the eight round Formula Drift Pro Championship takes place at Orlando Speedworld on April 26th and 27th.