The 2019 Formula DRIFT Black Magic PRO Championship unfolds, it continues to be one of the most competitive seasons in the 16-year history of the series. This weekend, Piotr Wiecek became the fourth winner in five rounds after an event in which the two top drivers in the championship failed to even reach the top ten at the AutoZone Throwdown presented by Permatex. Before this weekend, Wiecek hadn’t stepped foot on the podium since round seven of the 2018 season. But now that he’s found the top step, flanked by Worthouse teammate and Formula DRIFT double champion James Deane, will the pair relinquish it again? Are we witnessing a return to form by Wiecek and Deane?

Despite Seattle’s reputation for precipitation, the weather cooperated with the teams all weekend as Evergreen Speedway in Monroe, WA remained dry and consistent. However, it was a slightly depleted field, with 30 drivers making it to qualifying, compared to 37 at the opening round. That meant the top two qualifiers would gain the advantage of a bye run in the Top 32 competition heats, automatically moving them into the Sweet 16. This guaranteed an intense qualification battle to claim the top spots.

PRO QUALIFYING
With 13 drivers scoring more than 91 points in qualifying from a possible 100, we wouldn’t be disappointed by Friday’s action. Top of the charts was Piotr Wiecek (Poland) in his Worthouse / Falken Tire Nissan Silvia S15. His best score of 98 points gave him a small cushion from James Deane (Ireland) in second qualifying position on 95 points in the Worthouse sister car.

Behind them were three drivers on 94 points – Ryan Tuerck (USA), Dai Yoshihara (Japan) and Kenshiro Gushi (Japan). They would be separated by the scores from their second runs, which put Tuerck – winner of the previous FD New Jersey round – in third place driving the Ryan Tuerck Racing / Gumout / Nitto Tire Toyota 86. 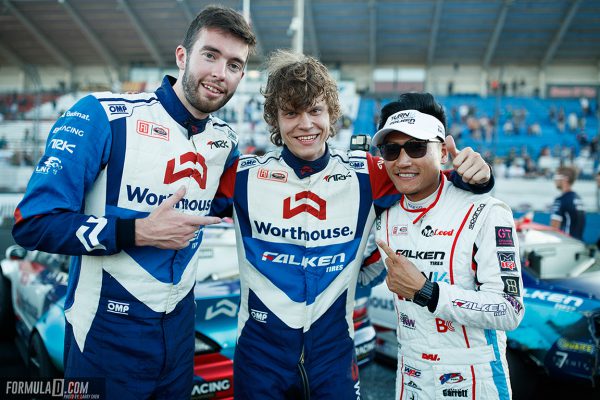 Fourth place went to Yoshihara in the Turn 14 Distribution / Falken Tire / ENEOS Oil Subaru BRZ. His 2019 qualifying form has been consistently good, but everybody wanted to know if the 2011 FD Champion could convert it into a podium position. And like the drivers in front of him, fifth placed Gushi in the GPP Toyota Racing / Achilles Tire Toyota 86 put in a blistering run to earn his top spot, drifting inches from the walls and nailing the clipping points perfectly.

Meanwhile, 2019 Formula DRIFT Black Magic PRO Championship leader, Fredric Aasbo (Norway) was struggling with his Rockstar Energy Drink / Nexen Tire Toyota Corolla. The car suffered mechanical problems in practice, which returned on his first qualifying run. The team worked hard to get Aasbo out for the second run, resulting in 88 points and an unexpected 18th position.

PRO COMPETITION HEATS
As the top two qualifiers, both Wiecek and Deane sat out the first round of competition heats while their opponents took to the field of combat. They’d both join the action in the Sweet 16 rounds, where Wiecek met Matt Coffman (USA) in the Coffman Racing / Thunderbolt Racing Fuel / Achilles Radial Nissan 240SX S13. Unfortunately, Coffman made contact with the wall on his lead run, forcing him to straighten and leave the course, handing the win to the Polish driver. 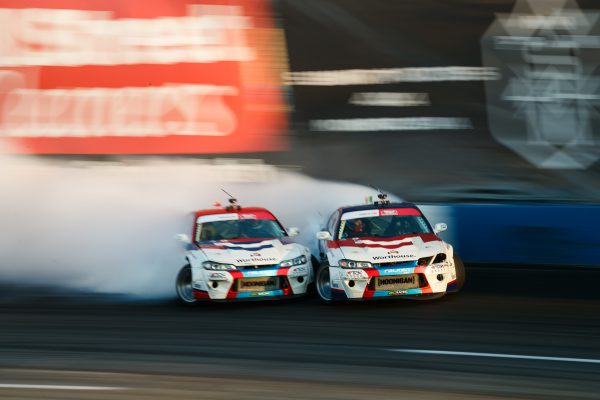 Advancing to the Great 8, Wiecek faced 2013 FD champion Michael Essa (USA) in the Essa Autosport / Achilles Tire BMW M3. Both drove hard and fast but Wiecek advanced to the Final 4 by virtue of a legendary chase run, getting ridiculous proximity to Essa and bringing the fans to their feet.

His advance matched Wiecek with another FD champion – Dai Yoshihara – whose appearance in the Final 4 guaranteed the Japanese driver a podium position by dint of his superior qualifying position. And while this would be his first visit to the podium since the Irwindale Final Round in 2017, Dai was determined to reach the top step. However, Wiecek would prove unstoppable, achieving excellent proximity in the chase position after Dai left a more air between the two in the first turn on their previous run.

The win propelled Wiecek into the Final, where he’d face teammate James Deane. The 2017 and 2018 FD Champion had started his campaign in the Sweet 16 against 2015 FD Champion Aasbo. The Norwegian driver was determined to make amends for his qualifying issues and drove hard in the chase position on the first run. He got up to Deane’s door handle in the first turn, although didn’t always have as much angle as Deane on the banking. Unfortunately, the two cars would collide after the finish line, causing damage to both and forcing Aasbo’s team to request a Competition Time-out. This would provide sufficient time to make repairs, although the Corolla returned to the startline without its front bodywork.

In the lead position, Aasbo drove impeccably but his every move was matched by Deane who was given the win as a result of the superior chase run.

Moving into the Great 8, Deane lined up alongside Justin “JTP” Pawlak in (USA) Roush Performance / Falken Tire Ford Mustang. In the lead position, Pawlak set an incredible pace, leaving the Irishman in his wake. Pushing hard, Deane closed the gap and would collide with the Mustang as they approached the first transition. This was attributed to a mechanical problem with Pawlak’s car, which was subsequently withdrawn, allowing Deane to progress to the Final 4 against Chris Forsberg (USA) in the NOS Energy Drink / Nissan 370Z on Nexen Tires.

As the most successful driver in Formula DRIFT history and three-time FD Champion, Forsberg can never be discounted and he proved this on the first run. In the chase position, Forsberg lost some ground to Deane out of the gate but quickly closed in and executed one of the closest transitions we’ve ever seen, with the front of his 370Z somehow missing the rear of the S15. In the lead position, however, Forsberg overcooked it on the exit of the first turn, getting all four tires off the course, resulting in an incomplete run and a win for Deane.

The Final of the Formula DRIFT Black Magic PRO Championship at the AutoZone Throwdown presented by Permatex would be an all-Worthouse affair. With the two identical cars taking to the startline, the fans knew there was a treat instore and nobody was disappointed. Taking the lead on the first run, Wiecek set a deep line though the course, with Deane in very close company – removing the Pole’s rear bumper in the transition as the two fought for position. On the second run, with Deane leading, Wiecek exchanged paint with his teammate in the first turn as he swept through the turn.

With both drivers on the limit, running great lines and achieving incredible proximity, the judges called for “One More Time” – instructing the drivers to repeat both runs because they were unable to separate them.

For the second time of asking, Wiecek set an aggressive lead run but he was shadowed by Deane, who again brushed the Pole’s bumper in the second transition point. But in the chase position, Wiecek schooled the Irishman on proximity, getting into position sooner and holding station through most of the run. He was rewarded with the win to complete a perfect weekend where he qualified first and finished first. And not only did the Worthouse team claim first and second but it was a clean sweep of the podium for Falken Tire thanks to Yoshihara’s third place. 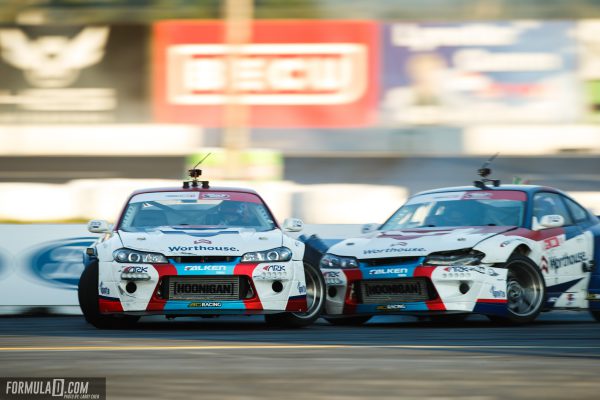 We spoke to a jubilant Wiecek after the podium celebrations. “This was an unbelievable weekend. It’s like a dream come true with first in qualification and the win in competition,” he told us. “I was definitely lucky in the Final with James. It was a rough battle and there was heavy contact but the judges decided I won, so I’ll take it but what a weekend!

“Congratulations to James and Dai because they did an amazing job. This track is tough but somehow I managed to be the best – I can’t even believe I’m saying it, but it’s a dream come true.”

We also caught up with Formula DRIFT president, Jim Liaw. “This was a fantastic start to the second-half of the 2019 season. We love coming to Evergreen Speedway – which is why we’ve had such a long term relationship with the track – because the fans are so energetic. Their enthusiasm brings out some great driving, but the challenging course means there have been a lot of close calls, which has reshaped the Championship with the top three drivers being knocked out early. This will definitely make the remainder of the season even more exciting, especially as we look forward to the St Louis round where we’ll be using a new layout on the redeveloped and extended World Wide Technology Raceway. This will undoubtedly level the playing field because it will be new to everybody, so we’re looking forward to seeing what unfolds next month.” 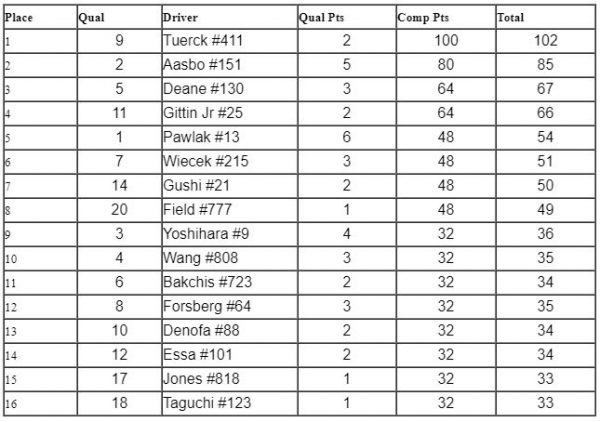