Perfect weather greeted fans as they arrived at Michelin Raceway Road Atlanta for Round One of the 2021 Formula DRIFT PRO Championship. All were expecting a world-class drift competition and nobody left disappointed.

The track, which hosted the inaugural FD event in 2004, remains a favorite among drivers and fans alike – its high-speed approach, flowing turns, and six-story elevation change give the track a unique character. And it’s a great place to start another year of epic drift battles after the traditional season-opener on the Streets of Long Beach was rescheduled to September 17-18.

Thirty-three drivers arrived in Braselton, GA for Round One. Five of them were series Rookies, including Jonathan Hurst (USA) with his Cash Racing Nissan G37. He secured an FD PRO license by finishing second in the 2020 PRO2 (now PROSPEC) Championship. Similarly, Trenton Beechum (USA) in the Clonex Racing / Nexen Tire Ford Mustang was the 2019 PRO2 Champion but chose to sit out the 2020 season. 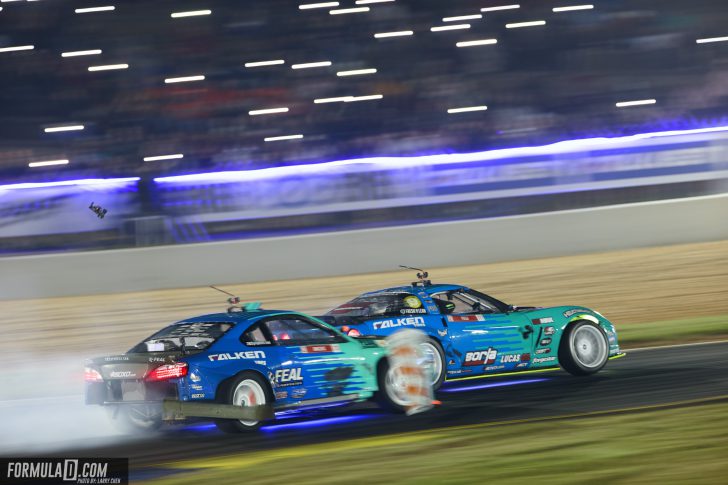 All teams would experience a new competition format: the traditional Thursday practice was gone; now taking place on Friday prior to a Knock-out Qualifying Format (KQF); with competition heats on Saturday.

And with the FD ATL competition starting in daylight and ending after dark, all FD PRO competitors ran with undercar LED lighting supplied by Official Lighting Partner, TYPE S.

QUALIFYING
The debut of the Knock-out Qualifying Format saw the top seeded drivers run first, setting the standard for the subsequent runners. In this instance, driver seeding was based on 2020 Championship position, so Vaughn Gittin Jr (USA) ran first in his Monster Energy Ford Mustang RTR Spec 5-D. Each driver was allowed one run to set their qualifying position, with drivers lower down the order knowing exactly what they needed to do in order to rise to the top.

A great feature of KQF is that the bottom eight drivers are able to run a second time to establish their position in the final eight places. This is particularly useful for drivers who might have experienced a technical problem. It also allows a driver to recover from an incomplete run, which would otherwise see them disqualified. The aim is to have a full complement of 32 cars and the best matchups through to the competition Final. 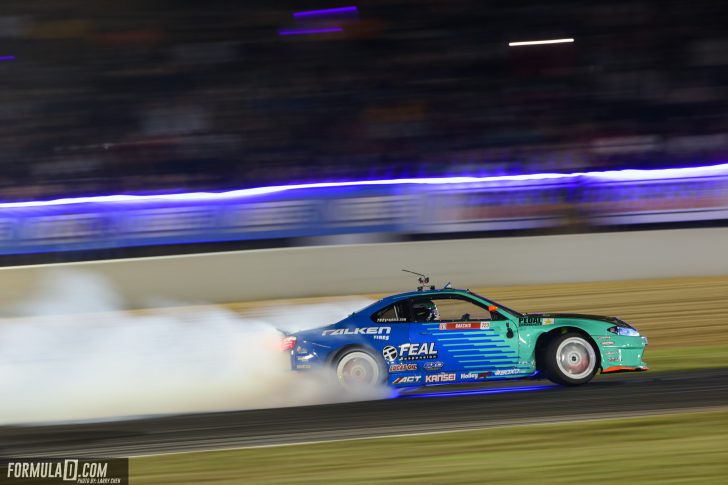 Although 33 cars arrived at Michelin Raceway Road Atlanta, engine problems meant Ryan Litteral (USA) was unable to compete in his Powerstop Brakes Nissan S15. The remaining 32 drivers only had to complete one qualifying run to move onto the competition heats on Saturday. And while that might sound simple enough, seven drivers had their runs ruled incomplete after they either suffered technical issues or simply got off-line and had to get out of the throttle.

When the smoke cleared, Matt Field (USA) emerged as the top qualifier with a 95-point run in his Falken Tire / Drift Cave Chevrolet Corvette. After finishing 14th in the 2020 FD PRO Championship, Field is hoping to be a regular podium visitor in 2021.

Third place was occupied by Aurimas “Odi” Bakchis (Lithuania) in his rejuvenated Falken Tires / Feal Suspension Nissan S15. As a fan favorite with impeccable driving style, Bakchis is always in the running and also hopes 2021 will be the year he claims his first FD PRO Championship title.

COMPETITION HEATS
At the end of a tough competition, Bakchis was certainly on his way to securing that elusive title. He emerged battered, bruised but victorious from the competition heats that matched him against Jonathan Hurst in the Top 32. Unfortunately, the Rookie experienced engine problems all weekend, which continued into the heats. With Bakchis in the lead position, the run was quickly yellow flagged after Hurst lost power and presented a possible hazard as the track doubles back on itself.

Lining up for the second run, Hurst again experienced a loss of power, causing Bakchis to collide with the rear of Hurst’s Nissan G37 as it came to an unexpected halt. With the S15 driver cleared of any blame, he advanced to the Top 16 to meet Travis Reeder (USA).

On their first run, Reeder dropped two tires into the gravel after Inside Clip 1. It allowed Bakchis to open a gap that Reeder was unable to close, perhaps acerbated by suspension damage. Forced to call for a 5min Competition Time Out (CTO), the team scrambled to repair the Travis Reeder Motorsports / Link ECU BMW M3 but was unsuccessful within the allotted time.

Bakchis was promoted to the Top 8 to meet 2020 Rookie of the Year, Adam LZ (USA). On the first run, with Bakchis again in the lead position, LZ appeared to carry excess speed as he initiated. The inevitable result saw the two S15s slam into each other, pushing Bakchis off the track. With both cars returning to the pits, Bakchis would advance to the next round after LZ was also unable to effect repairs on the LZ S15 in the time allowed.

In his Final 4 match-up against Jeff Jones (USA), Bakchis finally completed two hard-fought runs. With Bakchis leading the first, Jones maintained good proximity in the Jeff Jones Racing / GT Radial Nissan 370Z. He needed a clean run because Bakchis is legendary in the chase position. And, sure enough, Bakchis won the judge’s decision on his chase performance, advancing him to the Final.

His opponent would be Falken Tire teammate and top qualifier, Matt Field, who has earned a similarly tough reputation as Bakchis. Field arrived at FD ATL with a new mindset and refreshed Falken Tire / Drift Cave Chevrolet Corvette. But while Field hasn’t visited the podium since he scored two second-place finishes in 2018, Bakchis has greater momentum. Effectively, he’s on back-to-back Finals appearances, having won the Final Round of the 2020 FD PRO Championship at Irwindale Speedway.

As the Final began, Field led them away from the start line. Accelerating hard into the first turn, both drivers initiated at high-speed, touching at Inside Clip 1 as Bakchis appeared to carry more speed. He then side-swiped the Vette as they transitioned into Outside Zone 1. With both cars stopped and requiring repair, the judges had to apportion blame to determine how much time the teams received to fix the cars. By a unanimous decision, Bakchis was deemed at fault and took a 5min CTO. Field was given 10min to inspect and repair his car, and then added his CTO to ensure everything was in order.

Returning to the track, Field had the advantage and simply needed to complete a clean chase run. However, his Vette appeared to understeer as it transitioned into Turn 2, requiring Field to re-initiate the drift and straighten the wheels in the process. With the run assessed incomplete, the judges had no alternative but to request One More Time and have the drivers repeat both runs.

At the second time of asking, Bakchis and Field completed two clean runs. Both drivers were aggressive and precise, maintaining spectacular proximity to each other throughout the course. All that separated the two was a small correction by Field as the cars headed downhill through the Touch & Go on their fourth run. This was enough to award the win to a delighted Bakchis, who was immediately congratulated by Field.

“I’m stoked to win but it was a tough one,” said Bakchis after the trophy presentation. “We got bumped a lot and had to go through some really tough drivers to get here, but we did it thanks to hard work from the team to get me back out after each tussle.

“Getting to battle Matt in the Final has been a long-time coming. We train together, share a lot of data and info, practice together; so it was surreal that both of us made it to the Final. We battled really hard, but I went a little too hard on the first run and bumped him hard. After that, I got super-lucky when they called One More Time. I was then able to lay down a couple of killer runs after my team had to put the car back together yet again!

“It took a lot of work to get to the number one spot but I want to thank my team, Falken Tires and Feal Suspension for giving me what I needed to win. And I’m looking forward to more trophies this year!”

Top Rookie at FD ATL was Branden Sorensen (USA), who is the youngest driver to ever compete in Formula DRIFT. At the wheel of his 212 Performance / Sorensen Motorsports BMW, he defeated fellow Rookie Beechum in the Top 32 but was eliminated from the Top 16 by Dean Kearney (Ireland) driving the Oracle Lighting / Arclight Racing Dodge Viper.

For the final word we turned to Formula DRIFT President, Jim Liaw, “We’re all fortunate to have made it through a tough 2020 and have been hoping to come back strong this season. So, we’re happy to have fans in the grandstands again, and delighted that some states are opening up faster than expected. It means we have a chance to return to where we left things some 728 days ago. It was especially great to see, hear and feel the energy from the fans this weekend. We’re hopeful it’s the start of a memorable 2021 season as we march towards the Irwindale Finals in October and crown two more Formula DRIFT Champions.” 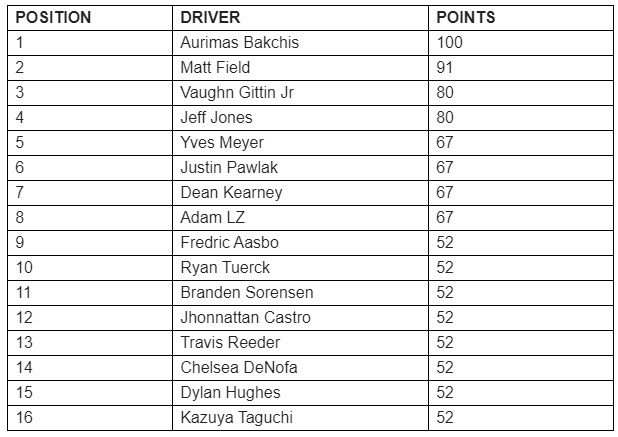 NEXT ROUND
Orlando Speed World will host Round Two of the Formula DRIFT PRO Championship and Round One of the Link ECU PROSPEC Championship on May 21-22. Please visit formulad.com for the competition schedule, ticket information, driver profiles. special content and the event livestream