The perfect weekend sees the Norwegian qualify first, win Round 8, and claim the 2022 FD PRO Championship

There were so many questions to answer as the teams approached the Final Round of the 2022 Formula DRIFT PRO Championship, Round 8: Title Fight. With only 14 points separating the top two drivers, who would be Champion? Would Fredric Aasbo do the double or Matt Field get his first win of the season and claim his first title? Would the threatened rain enable another driver to spoil the party? And who would be Rookie of the Year? 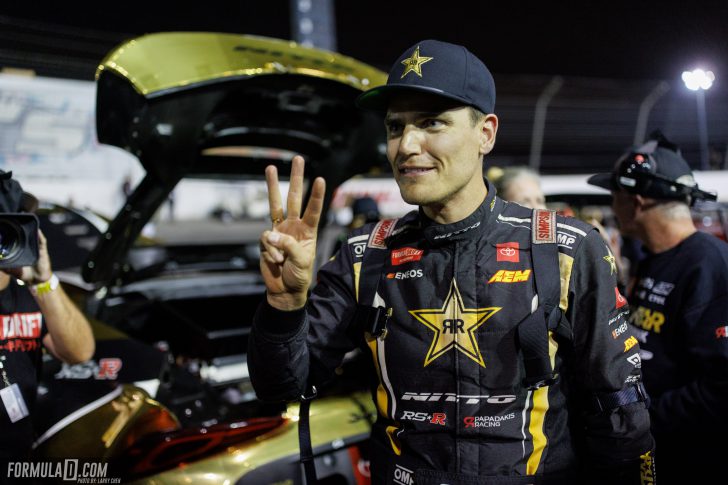 The coveted 2022 Formula DRIFT Tire Cup was also still up for grabs, with Nitto and Falken vying for top honors. However, the Auto Cup had been decided at the previous round. Toyota claimed victory thanks to powerful performances from drivers including Fredric Aasbo (Norway), Ryan Tuerck (USA), Ken Gushi (Japan) and Kazuya Taguchi (Japan). 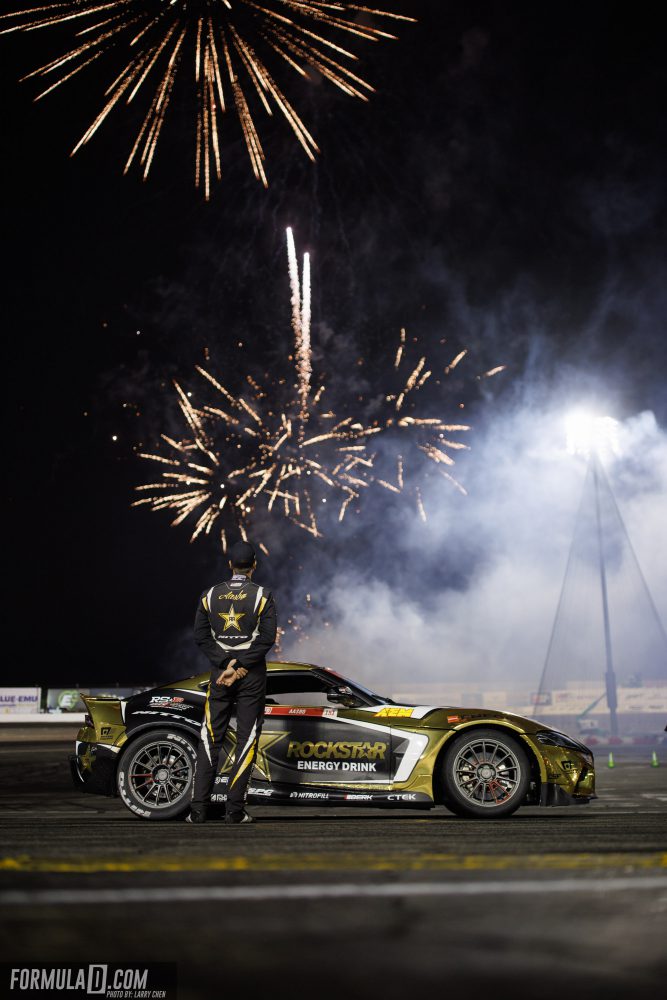 Adding to the tension of the Final Round, the famous track at The House of Drift had reverted to its 2019 layout, keeping the drivers on the toes while ensuring both the packed grandstand and the Formula DRIFT judges were able to see the cars finish each run. And so the stage was set for another epic showdown, but who would emerge victorious? 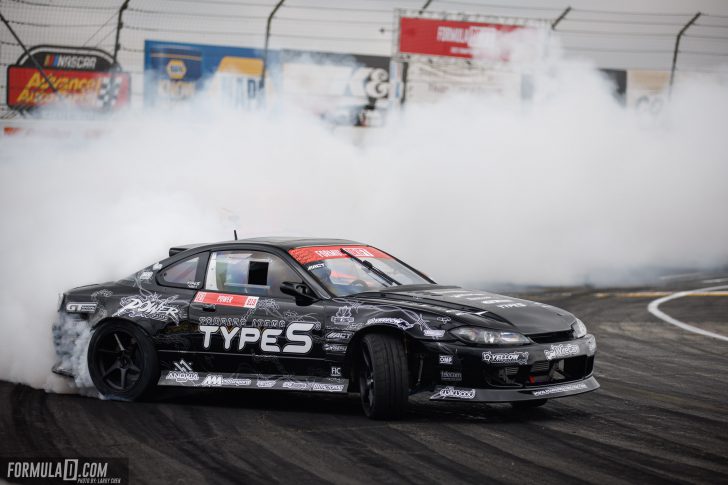 Greeted by dark clouds and a threat of rain for the K&N Knockout Qualifying session, defending Champion Fredric Aasbo (Norway) fired the first shot in what was going to be an intense battle. After Field scored 87 points on his qualifying run, Aasbo put his Rockstar Energy Toyota GR Supra in the number one position with 91 points.

With Wataru Masuyama (Japan) claiming second, and 18 year-old Branden Sorensen (USA) in third, it meant Field was ineligible for qualifying points. Aasbo, on the other hand, scored the maximum three points and narrowed Field’s Championship lead from 14 to 11 points. But with only nine points separating first and second place finishes, Field would need to finish third or lower for Aasbo to claim the crown.

While Field undoubtedly wished he’d performed better, six drivers were unable to complete their first qualifying run, relegating them to the Knockout Qualifying Format (KQF), where the the bottom eight qualifiers must run a second time. And with 35 drivers attempting to qualify for the Top 32 competition heats, three would be eliminated. Sadly, technical issues saw Kazuya Taguchi (Japan) and Taylor Hull (USA) head for an early bath, while Trenton Beechum (USA) had the lowest score and joined them in the tub.

While rain threatened qualifying, it assaulted Saturday’s competition heats, wreaking havoc throughout the field as drivers attempted to leave their mark on the Final Round.

Arriving at the end of the Top 32 competition heats, the precipitation initially had minimal impact, leaving the top contenders in play. That wasn’t the same for the series Rookies, however, with all eliminated in the first session. Yet with a healthy lead in the standings, Mike Power (USA) secured the 2022 Formula DRIFT Rookie of the Year title after finishing 22nd on the night and 17th in the final Championship standings driving his Power Racing Nissan Silvia.

Following an intermission, the surviving teams returned to an evolving track for the Top 16 heats. The nature of the banked oval course meant there were dry and damp patches, creating challenging conditions for the drivers who struggled to transmit 1000hp to the ground. 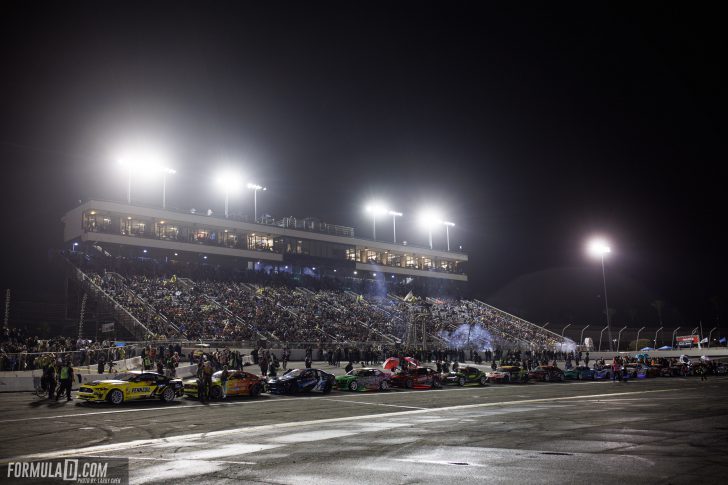 In front of a sell-out crowd, a number of big names succumbed to the conditions, although Aasbo was a beneficiary when his Top 16 opponent, Kyle Mohan (USA), slapped the wall exiting Outside Zone 3 (OZ3). Unable to repair the KMR / Renewable Lubricants / Mazdatrix Mazda RX-8 in the allotted 5min Competition Time Out (CTO), Aasbo welcomed the victory.

In the next heat, Dylan Hughes (USA), who was sixth in the Championship standings, spun his DHR / Royal Purple / Falken Tire BMW into the wall on his sighting lap. Exploring the surface to assess conditions, Hughes was also unable to make repairs in the time allowed. His elimination allowed Aurimas Bakchis (Lithuania) to advance.

Immediately after Hughes bounced off the wall, Championship leader Field took a tentative sighting lap, avoiding the treacherous banking. Unwilling to risk damage, it proved costly when he spun the Drift Cave / Falken Tire C6 Corvette immediately after initiating into the banking in OZ1. Trying to regain control, Field powered the Vette into the concrete wall, causing considerable suspension damage.

Despite a valiant attempt, Field and his team were unable to replace the bent components. His Championship dreams lay shattered on the ground alongside his bent suspension arms as his dismissal assured Aasbo the 2022 FD PRO title.

“I want to thanks my boys. The way they handled the season gave me the energy to keep going,” Field reflected. “It’s a game of inches and today we lost. And while it’s a cliché, we’re determined to come back even stronger next year.”

Field’s despair was Adam LZ’s delight. With Field out, LZ advanced as far as the Top 4, scoring his best ever result with a fourth place finish to cap a frustrating season in the AutoZone Ford Mustang RTR Spec 5-FD.

In the next Top 16 heat, Travis Reeder (USA) in the Travis Reeder Motorsports /  GT Radial BMW M3 faced third place Chelsea DeNofa (USA) driving the Pennzoil / BC Racing Ford Mustang RTR Spec 5-FD. After a good lead run, Reeder appeared to make contact with the Mustang, requiring a major correction. DeNofa pulled away, exploiting his advantage but would spin across the finish line. The spin alone was enough to eliminate DeNofa, but when the early contact was attributed to an inappropriate handbrake tug by Chelsea, Reeder was given the judges’ decision.

Reeder would be knocked out of the Top 8 after a punishing heat with DeNofa’s teammate LZ. Chelsea would finish the event in 13th and the season in fourth place overall.

Another torrential downpour saw the grandstands and camera positions cleared to avoid lightning strikes. It meant the Top 4 semi-final heats would be decided by the weather.

In the first contest, LZ spun on his lead run, allowing Aasbo to advance. Then Jeff Jones (USA) broke the front subframe on his Evol Auto Works / PRISMA Labs Nissan 370Z during his sighting lap. Unable to repair the car, Jones conceded to Tuerck but placed third and reached his first FD PRO podium thanks to a better qualifying position than LZ.

The sodden Final would pair the Papadakis Racing teammates, Aasbo and Tuerck. Declining a sighting lap because they had been as deadly as the competition runs, Tuerck spun his Rain-X / Nitto Tire Toyota GR Corolla in OZ1 after making contact with the wall. And while the Corolla driver set a good pace on the second run, Aasbo only needed to finish to win Round 8 and the Championship, completing his perfect weekend.

Not only did Aasbo successfully defend his 2021 title but he joined Chris Forsberg (USA) and James Deane (Ireland) as the only three-time Formula DRIFT Champions in the 19-year history of the series.

Aasbo’s win in the Rockstar Energy Toyota GR Supra ended the run of different winners at every 2022 round. He would be the first driver to climb to the top step of the podium twice this year, winning both at Irwindale and previously at Round 2 in Atlanta.

The success of the Papadakis drivers had not only given Toyota a decisive victory in the 2022 Formula DRIFT PRO Auto Cup, but also helped Nitto secure the 2022 FD Tire Cup. The early demise of many Falken teams also saw GT Radial finish second.

“I have some experience in this weather and I knew it was going to get gnarly,” Aasbo commented after learning he was the Champion. “I was so close to crashing on my first sighting lap and sure I’d crash on the first run against Kyle [Mohan] but got away with it. The Top 16 was carnage and I saw Matt [Field] in one of the most unfortunate situations but here we are; the three-time, back-to-back Champions. This is the stuff of dreams!”

After the podium celebration, Aasbo explained, “I don’t think this has sunk in yet. I was very emotional last year when I won the Championship but today was a rollercoaster where it was so easy to go from hero to zero. This year has been all about growth; understanding what I needed to do well. And I’m really proud to have turned around our mid-season slump. I started working out more and focused on my mental game while trusting the team to help me get back, and here we are with a perfect weekend. So, I’m really proud to stand on the podium with [Field and Tuerck] – it means a lot.”

And as the celebrations continued into the soggy night, we were contractually obliged to get the final thoughts of Formula DRIFT President, Ryan Sage: “This was one of the most insanely challenging events we’ve ever done, which also proved to be one of the most dramatic because of the weather and how the Championship points changed across the board. Congratulations to Fredric for a perfect weekend. It’s great to see him standing on the podium alongside Ryan and first-time trophy winner Jeff Jones, who’s been waiting his entire life for this moment. I’m especially excited for him. 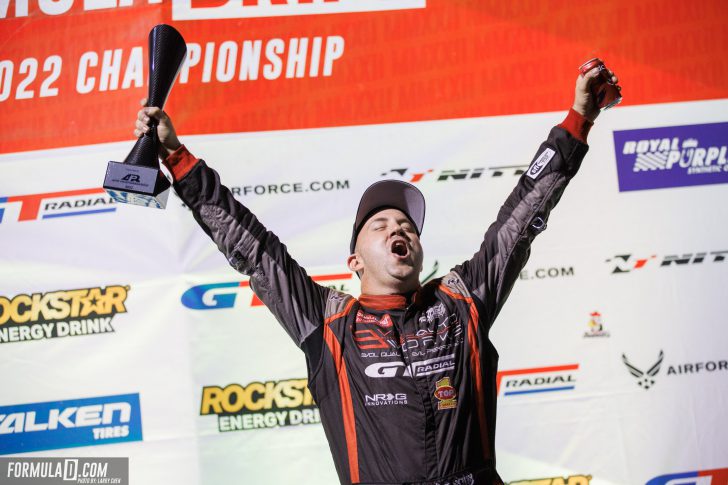 “For the Championship, we saw Matt Field carry the momentum for most of the season but he became a victim of the rain and it cost him the title. It cost a lot of drivers today but Aasbo and Tuerck were able to deal with it and benefit.

“Looking ahead, we’ve got a lot of cool plans for the 20th Anniversary next year. Twenty years of doing anything is monumental, so we’re going to spring some surprises and celebrate a very special landmark for us all.” 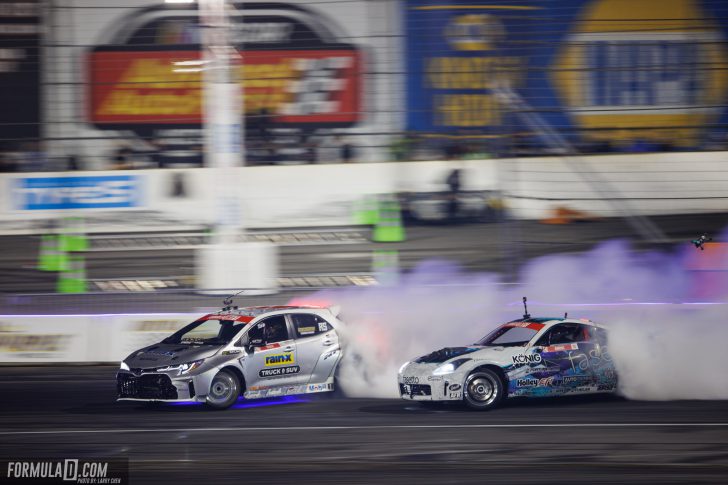