After the carnage of St Louis, the Formula DRIFT PRO Championship teams seemed relieved to arrive at Evergreen Speedway in Monroe, WA for Round 6: Throwdown. Greeted by warm weather and a familiar banked track, drivers quickly got down to assessing repairs and resetting the muscle memory for what would be a crucial event for Championship contenders.

With five different drivers claiming victories in the first five rounds (three of them for the first time in their careers), points leader Matt Field (USA) had reached the top thanks to consistency rather than wins. And with a 32-point lead over his nearest rival, Fredric Aasbo (Norway), may students of drift have been recalling Chris Forsberg’s 2016 Championship title (his third), which he achieved without ever standing on the top step of the podium. 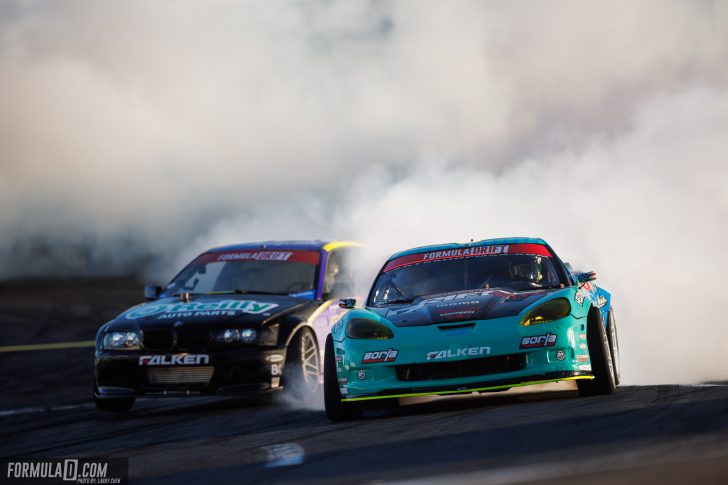 Would Field maintain his lead? Would he be the sixth driver to win a round in 2022? Or could his closest rivals reorganize and mount a determined challenge with only three rounds left?

Regardless of the result, it would take place in front of a sellout crowd, which was treated some incredible action under blue skies.

If Kazuya Taguchi (Japan) surprised fans in St Louis with his first ever top qualifying position, imagine how the Seattle crowd responded to him repeating the feat.

As always, qualifying order is determined by the Formula DRIFT PRO Championship points table. In previous years, the top driver went last, putting pressure on him to perform. However, the script was flipped in 2022, meaning Field would set the benchmark. His 90-point run was warmly received as he seemed to do everything right. However, he’d be one of five drivers to be awarded the same score. When this happens, position is determined by the individual scores for style, angle and line. With style being the first differentiator, Chelsea DeNofa (USA) claimed second place thanks to a 28-point style score in his Pennzoil / BC Racing Ford Mustang RTR Spec 5-FD. Third went to Forsberg who resolved the terminal engine/nitrous problems he experienced in St Louis that saw him eliminated from the Top 32. He scored 27 style points in the NOS Energy Drink Nissan Z on GT Radials while Field to placed fourth in the Drift Cave / Falken Tire C6 Corvette with 26 style points.

It wasn’t until Taguchi, running tenth in the K&N Qualifying session, received a 93-point score that the siege ended. With an almost perfect score for his line through the four Outside Zones and single Inside Clip, the Japanese driver again showed what he’s capable of behind the wheel of his ISR UpGarage / GT Radial Scion FRS.

Most of the top seeds qualified well, but defending Champion and second-placed Aasbo could only manage 11th; a position Aurimas “Odi” Bakchis (Lithuania) would have gratefully accepted. However, repeating his misfortune from St Louis, Bakchis again experienced technical problems on his first run in the Falken Tire / Feal Suspension Nissan S15. With an incomplete run, Bakchis was relegated to the Knockout Qualifying Format (KQF), which sees the bottom eight drivers run a second time. And with thirty six drivers attempting to qualify for the Top 32 competition heats, four would be eliminated in KQF.

Bakchis was among the fortunate four who would compete on Saturday, but the best he could hope for was 29th, which meant he faced Field in the Top 32 competition heats. While far below Bakchis’ potential, it was preferable to the fate that befell leading Rookie Daniel Stuke (USA), Darren Kelly (New Zealand), Ola Jaeger (Norway) and Trenton Beechum (USA). All scored insufficient points to continue and checked out early.

With Stuke out, it gave the other series rookies a chance to catch him in the 2022 Rookie title chase. Nick Noback (USA) scored 83 qualifying points in the KoruWorks E46 BMW, placing him 24th overall. He’d need to fight hard to make up the points difference in Stuke’s absence.

Sadly, Taguchi’s fairy tale came to an abrupt end in the very first tandem run of the Top 32 competition heats. After a copybook lead run, he got lost in the tire smoke created by the RAD Industries / GearWrench / GT Radial MkIV Toyota Supra of Dan Burkett (USA) on the chase run. Running wide in Outside Zone 2 (OZ2), Taguchi ran off-track and later admitted to a mistake. “I should have been more chill but wanted to give the spectators a good battle,” he explained. “I had no vision in his smoke but I’m still learning and I’ll come back stronger for the next round.”

The Top 32 was also challenging for a number of title contenders. Notably, Bakchis was eliminated by Field after a One More Time battle when the judges asked them to repeat both runs. Even after the second turn, Field won on a split decision following a titanic battle among the Falken Tire teammates.

Ryan Tuerck (USA), who sat third in the FD PRO Championship coming into FD SEA, had to use his only 5min Competition Time Out (CTO) before his Top 32 battle against Kyle Mohan (USA). The driver of the Rain-X / Nitto Tire Toyota GR Corolla suffered a massive oil leak while warming his tires in the burnout box. Fortunately, it was a loose oil pipe from the turbo, possibly the consequence of an engine change after practice. Tuerck was able to put it behind him and win the heat but would be handicapped if the car encountered further problems during the event.

And it happened when Tuerck snapped an axle in his Top 8 battle against DeNofa. With both combatants showing no mercy, Tuerck was tight to the Mustang’s door, tapping both the wall and DeNofa before spinning out. With no time to make repairs, Tuerck was the final Toyota to be eliminated.

Dylan Hughes (USA), fifth in the standings after St Louis, incurred significant damage during his Top 32 run against Simen Olsen (Norway). The driver of the Boost Racefuel / Toyota GR Supra was slow to transition into OZ4 and gave Hughes nowhere to place his DHR / Royal Purple / Falken Tire BMW. The inevitable collision threw the BMW into the air but fortunately there were several hours before the Top 16 heats to effect repairs.

Hughes would reach the Top 8, eliminated by Field after a dramatic heat that saw them run six times before the judges could separate them. Showing tremendous respect for each other, Hughes and Field held a masterclass in zone-filling and proximity. The confrontation was finally decided in Field’s favor after Hughes tapped the wall in OZ1. His subsequent throttle lift gave the Corvette driver no escape route and his spinning car was the inevitable consequence. Despite an appeal from the team and vocal fan support for the local driver, Hughes placed fifth, dropping to fifth in the title race.

Field dispatched Burkett in the Top 4, but this was the Supra driver’s best FD PRO result to date and reflected his new approach this season. Field advanced to the Final to meet DeNofa, who had already beaten two previous round winners and three-time Champion Forsberg.

The intense Top 4 battle against Forsberg saw the Nissan driver correct his line in OZ1. It caused DeNofa problems throughout the reainder of the run and gave him the judge’s decision. Forsberg’s third place kept him fourth in the title race.

With neither man winning a round in 2022, either Field or DeNofa would be the sixth FD PRO victor in six rounds. And while three of the previous winners were top step virgins, both Field and DeNofa know the taste of victory and were thirsty for more. 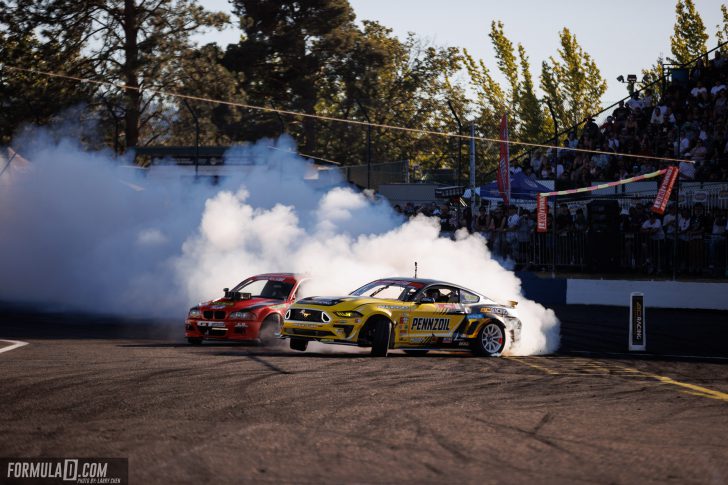 It would be a battle of Goliath versus Goliath. Both drivers have immense reputations and are equally capable of winning on any given Saturday. With spectators on the edge of their seats, the Final was decided by a single mistake. With Field in the chase position he brushed the rear of DeNofa’s Mustang as the pair transitioned into OZ3. With both cars on the edge of grip, the bump push DeNofa off-line, forcing his car to straighten.

With Field ruled at fault, DeNofa was given time to check his car while Field used his 5min Competition Time Out. As the cars returned to the starting line, Field set a blistering pace through the Evergreen course but DeNofa simply needed to shadow him to take the win.

“My goal here was to have fun,” DeNofa told us after the podium ceremony. “And while everybody else was competing and doing the best they can, for me it was about having fun and enjoying drifting again. I didn’t want to be so competitive and worry about every aspect of the weekend. I’ve been doing it for 20 years, so I just trusted my gut on every run and drove as hard as I could, and it worked out. I ended up on top! 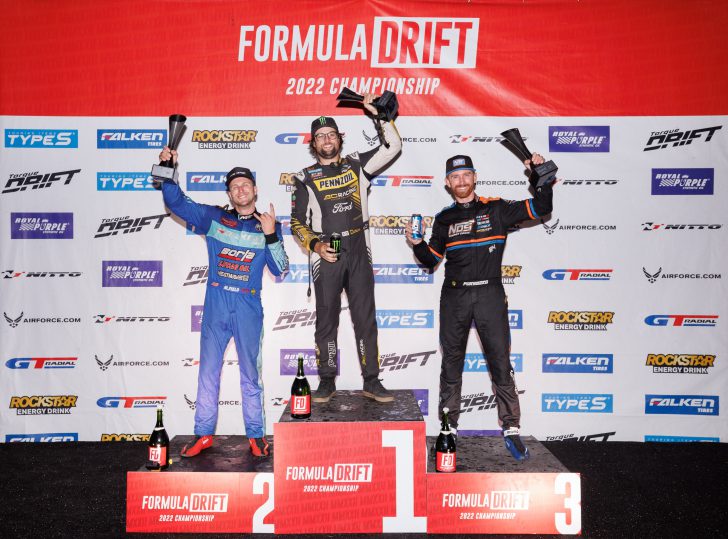 “This is the first time I’ve won an event where I was just having a blast the entire time. There’s always been something going on in the past but this was different. We had some crazy action all weekend, getting hit on almost every run, but I put the car where it needed to be. Luckily, the judges saw it and we ended up on top.”

The result moved DeNofa from sixth to fifth overall while Field extended his lead at the top of the table thanks to early retirements from most of his nearest rivals. He’s now 56 points ahead of second-placed Aasbo.

Just like St Louis, Nick Noback (USA) was again the leading Rookie. He placed 22nd in the KoruWorks E46 BMW but dropped to 23rd in the overall title race. The previous Rookie leader, Daniel Stuke (USA), failed to qualify and dropped to 24th. That allowed Mike Power (USA) to lead the Rookie field, sitting 21st overall.

Before packing the trucks and heading to Utah for the Link ECU PROSPEC Final on September 15-17 we spoke to Formula DRIFT President, Ryan Sage: “With the sixth round in the books we’ve now have six winners and Matt Field is not one of them. It feels very much like Chris Forsberg in 2016 but Matt has a fairly substantial lead and it’s essentially his to lose at this point.

“From Seattle we’re heading to a new track in Utah and then back to Irwindale for the Final. Nobody has any data from the Utah Motorsports Campus and the drivers throw everything against the wall at Irwindale, so the Championship certainly isn’t decided. It’s great to see new faces continuing to rise to the top but congratulations to Chelsea for claiming his first well-deserved win of the year.”

Utah Motorsports Campus in Grantsville, UT will host the Formula DRIFT PRO Championship Round 7: Type S Elevated presented by Autozone and the Final Round of the Link ECU PROSPEC Championship on September 15-17. Please visit formulad.com for the competition schedule, ticket information, driver profiles, special content, and the event livestream