Once again Formula DRIFT and Fatlace have teamed-up for their second “Cone Killers” event at the Fatlace store in San Francisco. The event will feature the release of a limited edition Fatlace x FD shirt, driver meet and greet, Miss FD, and one winner will get a chance for a Formula DRIFT ride along!

Then join us for the after-event at O Izakaya Lounge from 9PM – 12AM.

Available exclusively at the Fatlace Store and Fatlace Booth during Round 6: Locked and Loaded. Fatlace takes it back to the roots of drifting with the release of the “”Support Your Local Drifter” t-shirt available in both black and white.

Available exclusively on the Formula DRIFT online store and at events only is the official “Locked and Loaded” Formula DRIFT x Fatlace collaboration.

“What an unbelievable finish to a great weekend,” said Chris Forsberg, winner of Round 5: Breaking Point and Formula DRIFT Championship Points leader. “We were leading the points chase for the series and the Tires.com Triple Crown and just wanted a strong finish. We could not have asked for a better turnout this weekend.”

The 2-day weekend event treated the fans to both Formula DRIFT Championship action and a Pro Am competition. The drivers came prepared for any weather conditions at Evergreen Speedway as this venue hosted the first rain event in Formula DRIFT history last season, but the event remained dry all weekend with cool weather. With only 3 events remaining in the season the pressure was on for the drivers to make their mark and didn’t fail to disappoint the excited crowd.

Vaughn Gittin in the Falken Tires Ford Racing Mustang GT and Eric O’Sullivan in the Hankook / Rockstar Subaru WRX put on an exciting match, which had O’Sullivan moving on to the Finals, but would fail to run due to damage from the previous round giving Forsberg the victory. Tyler McQuarrie in the Falken Tires Nissan 350Z and Gittin fought for 3rd place and after an intense battle McQuarrie would come out on top of his Falken Tires teammate. Entering the event with the points lead, Chris Forsberg was a marked man and battled through the tough competition meeting McQuarrie in semi-finals and proved to be one of the most entertaining match-ups of the evening with both drivers putting it all on the line with their fast entry and great angle along the banking of the course. Forsberg got the best of McQuarrie in the battle of the 350Z and took home his second victory of the season, which also was the 2nd event of the Tires.com Triple Crown in which he also won the 1st event at Road Atlanta.

“It’s hard to describe the Seattle event in words. I can only say that with all the excitement and drama that unfolds on track its hard to imagine the story we are seeing could even come out of Hollywood,” said Ryan Sage, vice president of marketing and co-founder of Formula DRIFT. “The championship is on and there are more than a few drivers that can still take the championship going into Round 6: Locked and Loaded at Infineon Raceway.”

Formula DRIFT returns to Infineon Raceway for Round 6: Locked and Loaded later this month on August 21-22. This is a special event with Formula DRIFT joining the IndyCar weekend. The best drifters in the world will share the track with the best drivers in the world including Helio Castroneves, Danica Patrick, and Scott Dixon. Ticket packages are available now.

Qualifying just finished – instead of a top 32 we will have top 30, since some drivers didn’t make it to Evergreen Speedway and some cars broke down. 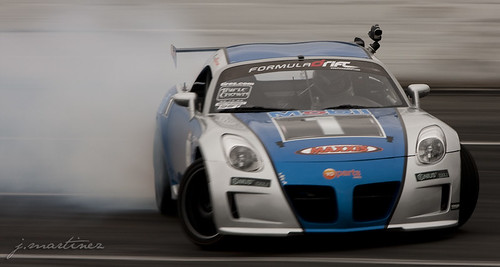 Justin Pawlak getting super sideways while riding the bank 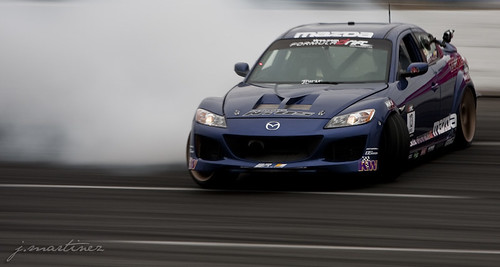 Darren McNamara cars is running very well – can he pull himself back to the #1 spot? 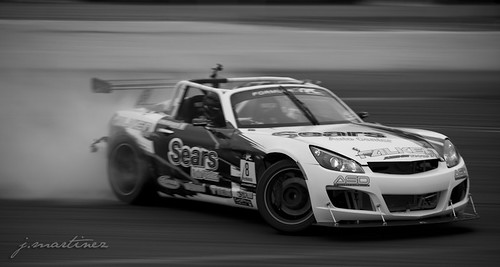 Despite Economy, Businesses Still Spending in Motorsports
by Dan Frio

It may be the worst economy seen in several generations, but companies are still spending money marketing their brands in motorsports. It’s an idea that might give most CEOs insomnia. Slashing marketing budgets in downturns is custom. But to then spend those fewer dollars in motorsports sponsorships, never a cheap arena to begin with?

Not so, say some marketers. For companies that can stomach the risk, downturns provide an opportunity to capture market share at the expense of cautious rivals.

“Motorsports is a very important avenue for us,” says Nick Fousekis, Falken Tire Senior Manager Consumer Marketing. “It’s another opportunity to get in front of people that already know, or may not know, our brand. They can see that we’re not just a tire manufacturer peddling black, round objects. We’re out there. We’re active.”

As 2009 opened, the motorsports headlines were not encouraging.

To read the rest of the article
END_OF_DOCUMENT_TOKEN_TO_BE_REPLACED