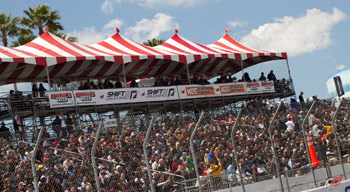 Long Beach, Calif. – April 21, 2011 – Formula DRIFT made history during the first event of the 8th season of competition, as Round 1: Streets of Long Beach became the most attended drift competition in the history of the Series. Over 16,000 fans came to the near capacity event, outdrawing previous events.

Previously, the 2010 Formula DRIFT season finale, the Red Bull Drifting World Championship held by Formula DRIFT, and the original D1 Exhibition Match produced by Formula DRIFT co-founders Jim Liaw and Ryan Sage were some of the most attended drifting events.

“The first event of the 2011 Formula DRIFT Championship season was a tremendous success, and we thank the fans for their enthusiastic support of the Series,” said Jim Liaw, president and co-founder of Formula DRIFT. “Formula DRIFT is dedicated to providing the best drifting competition and entertainment in the world and we look forward to the rest of the season.”

Adding to the success of the first event, DriftStream, Formula DRIFT’s live webcast, reached over 289,000 unique IPs over the Friday and Saturday broadcast. DirecTV also captured the event in 3D with an air-date to be announced. The FD TV team filmed all the action in HD for the Formula DRIFT television program that will air on the VERSUS network in the US and various international networks starting August 14.