If there were one word you couldn’t call the 2016 Formula DRIFT season, it would be “predictable.” While Vaughn Gittin, Jr. and Fredric Aasbo each won twice over the course of the past seven months, the only truly foreseeable thing was Chris Forsberg and podiums. For seven rounds, Forsberg never won but podiumed each time. This consistency would lead to his championship at Irwindale, though he would break that streak at Round Eight. Only one other driver won more than Forsberg this year, which is further proof that Matt Field is inching closer to becoming a threat to the championship in the very near future. If there was one thing that could be said for certain, it’s that Round Eight of the ’16 Formula D Championship was a tough battle for everyone. 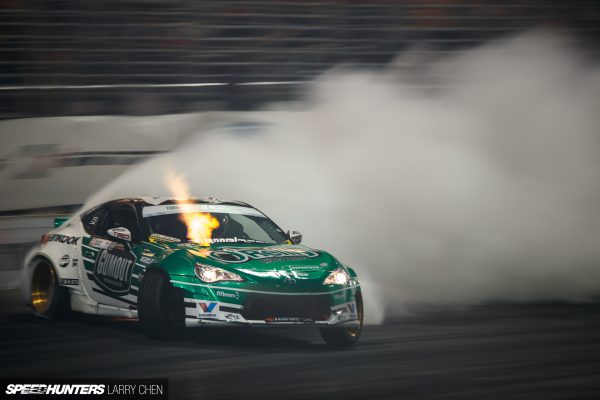 Formula Drift Irwindale is arguably the most important and largest professional drift event in the world. This year was no exception as the championship was decided during the Top 16 rounds of competition.

Here is a collection of my favorite images from the Formula Drift season finale.

Chris Forsberg is the 2016 champion and also the first driver to get three Formula Drift Pro championships under his belt. I guess you can say he was pretty happy.

I love shooting at Irwindale. Because it’s the final event of the professional season, all of the drivers are pushing as hard as they can.

Kenny Moen’s car caught on fire while waiting on grid, so he jumped out, grabbed a can of Coke, and used that to try to put out the flames. What a boss.