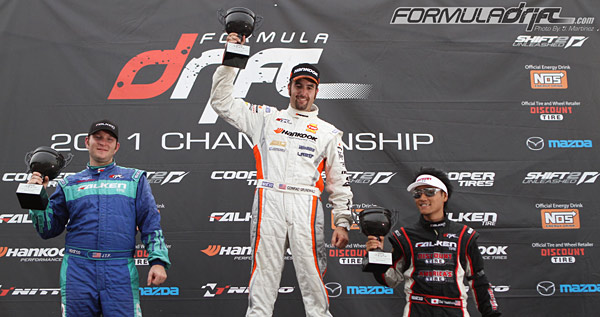 Long Beach, Calif. – June 18, 2011 – Formula DRIFT returned to Wall Speedway for Round 4: The Gauntlet. The capacity event was action packed with Conrad Grunewald in the Hankook Tire Chevy Camaro taking the victory. This marked Grunewald’s first victory in Formula DRIFT history and second podium since 2005.

Round 4: The Gauntlet at Wall Speedway was another exciting event where the combination of the banking on the track and the competitive nature of the drivers pushed them to the limits. As a result a few of the vehicles were damaged in competition in dramatic fashion keeping them from advancing to the later rounds. The fans witnessed a true showing of world class drifting.

“Despite the brief storm that caused chaos after qualifying on Friday, the Formula DRIFT community pulled together to help one another to put on another great event,” said Jim Liaw, president and co-founder of Formula DRIFT. “Fans came out to fill the capacity of the venue on Saturday to showcase the ever growing sport this season.”

The final four vehicles gave a tremendous show for the fans with the first battle pitting number one qualifier Ryan Tuerck in the Mobil 1 / Gardella Racing Chevy Camaro against Conrad Grunewald in the Hankook Chevy Camaro. Tuerck went high on the banking, making impact which damaged his vehicle taking him out of the competition and automatically giving him fourth place. Current points leader Justin Pawlak in the Falken Ford Mustang faced teammate Daijiro Yoshihara in the Discount Tire / Falken Nissan 240SX to meet Grunewald in the finals. Yoshihara lost the battle and took third place due to Tuerck’s damaged vehicle and moved into second in the Pro Championship points standings. The finals saw a battle of American muscle with Pawlak facing Grunewald. Grunewald edged out Pawlak for his first victory of his career. Pawlak remains the points leader with this third podium finish of the season.

“I’m really happy for the team,” stated Conrad Grunewald, winner of Round 4: The Gauntlet. “We overcame a lot to get to this position this weekend. And I am overwhelmed to be on top of the podium for my first time and especially to do it by beating a Ford Mustang.”

The Formula DRIFT Championship continues for Round 5: Throwdown at Evergreen Speedway on July 22-23. Tickets are available to purchase online.