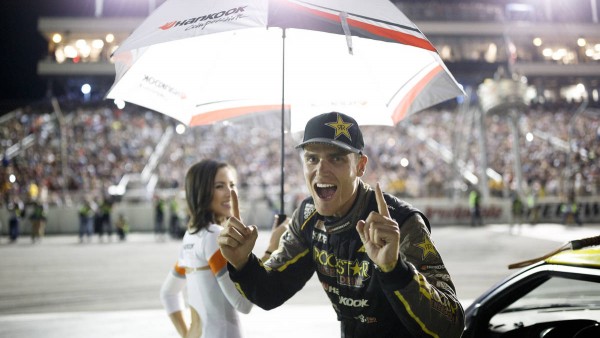 “Formula D did a pretty good job scripting this,” Aasbo joked after his triple crown season finish at Irwindale Event Center in Southern California. “This was amazing. This was my dream come true in every respect. Not just winning (the) FD US championship and (the) world championship (but) we’ve had a great season and I’m really happy for everyone for making it happen.”

Aasbo entered the final round with a big lead over second-place driver Ken Gushi. By qualifying for the Top 16 on Saturday night he clinched the both the U.S. Formula Drift Championship and the Formula Drift World Championship, a title made up of a handful of international races. They were Aasbo’s first championships after finishing runnerup last year in the U.S. points chase. Aasbo won four of the series’ seven events this year, a record. He has more than 60 podium finishes in the sport and won Formula D’s Rookie of the Year in 2010.

“I knew so very well that getting out of Top 32 was going to be it for the championship so, when it happened, I did the biggest burnout of my life. They couldn’t have stopped me if they tried,” said the native of Ski, Norway. “That was the craziest feeling of my life, that feeling of success, the camaraderie with the team… The guys pulled me out of the car and threw me in the air. It was mind-blowing. It’s really hard to describe. Imagine working for something half your life and then making it happen? It felt like that.”

Aasbo drives for Papadakis Racing, which was founded and is run by former Import Drags great Steph Papadakis. It was the team’s third drift championship, after Tanner Foust won for them in 2007 and 2008.

Drifiting is the art of gracefully sliding a car sideways in competition with another drifter, sort of like pairs figure skating except that you don’t want your partner to win. Formula Drift sanctions the seven-event competiion in the U.S. as well as a world championship in a few other countries. Formula D celebrated its tenth anniversary two years ago.

While Aasbo looked strong all weekend, his victory at the final event itself was by no means assured. Indeed, the beauty of this form of competition is that pretty much anyone can win pretty much any event like, technically speaking, the U.S Open of tennis or golf.

Aasbo on track on his way to winning.PHOTO BY SCION RACING LARRY CHEN

A field of 16 top drivers lined up for Saturday night’s event, which featured a single elimination format just like college basketball. Lose once and you’re out.

In the final round Aasbo faced off against fellow Scion pilot Ken Gushi, in a media spectacle that must have pleased someone at Scion corporate headquarters just down the freeway in Torrance. Gushi almost didn’t make it to teh final, He had engine trouble all weekend and then got smacked into the wall in the quarterfinal. That could have ended his weekend right there. He would have been allowed a time out to check his car before lining back up for the second run of that round but didn’t appear to be taking it, instead lining back up for Run 2 with his possibly damaged Scion.

“I really didn’t know what was going on,” Gushi said of the quarter finals confusion. “The starter flagged me in (to the start box). I tried to explain to my team that, ‘Hey we just got hit, we just had contact with the wall.’ I guess they figured it out. Wow that was a crazy ride. My neck hurts but that’s about it.”

The Scion wasn’t badly damaged and Gushi prevailed in the quarter, which put him in the final with Aasbo. But while Gushi came on as strongly as he could in the final round, there was no stopping The Hammer, who won the last round of the season by unanimous decision of all three judges.

Hoisted on the shoulders of the crew.PHOTO BY SCION RACING LARRY CHEN

Aasbo leapt from his car and kissed Irwindale’s start/finish line.

That act probably won’t be available to racers next year. There are only four more racing events left on the Irwindale calendar this year, as the facility will almost certainly close to be replaced by yet another shopping mall. That leaves racing in Southern California with only a handful of tracks. SoCal has seen hundreds of race venues open and close in the 100+-year history of the automobile. No word yet on where Formula Drift will go to close out its 2016 season next year. It has been at Irwindale almost since the facility opened, holding a dozen drift events at the facility, which has come to be known as “The House of Drift.”

But that’s all in the future. At season’s end Aasbo was just happy.

“What an incredible night. Winning the event and clinching the Formula DRIFT U.S. Championship and the first World Championship, you couldn’t have scripted a better story,” said Fredric Aasbo, winner of Round 7: Final Fight. “It’s been a rollercoaster and we’ve had ups and downs over the past five years, but the team has stayed on top of everything helping to grow to a championship contender and I couldn’t be more proud of what we have achieved this season.”