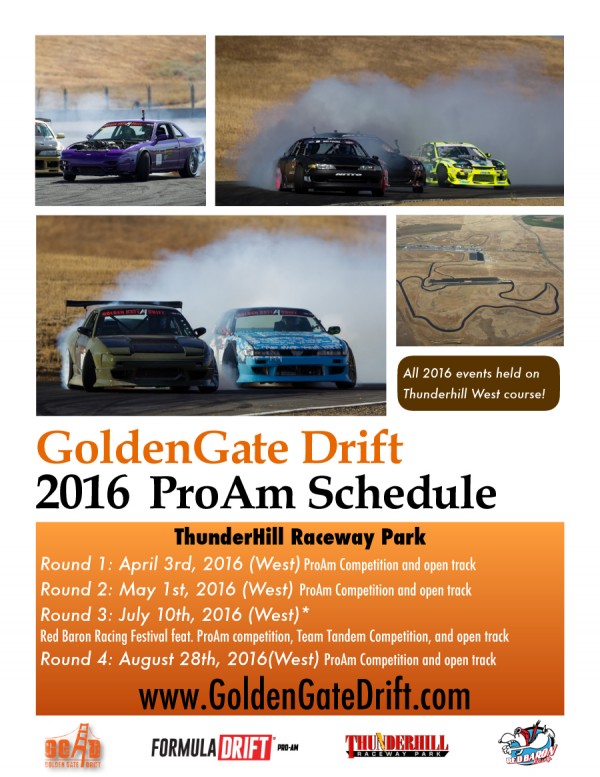 GoldenGate Drift ProAM Championship is going into its fourth year of
Formula Drift sanctioned competition events. We have many great drivers that have entered into the ranks of Formula Drift Pro1 and now Pro2.  Our motto is “building future champions.” We look to continue building an elite group of Pro Drifters.

We are pleased to announce that we will be working exclusively with
ThunderHill Raceway park in 2016. We will hold all four rounds of GoldenGate
Drift ProAm on the newly built 2 mile road coarse, ThunderHill West. This track
o ers many options for us to continue to push the skill set of drivers and
groom them for FormulaDrift. “Thunderhill West, The new home of GoldenGate Drift.”

Goldengate Drift welcomes back Red Baron Racing as our presenting sponsor for 2016. Round 3 of 2016 GGD will be apart of the “RedBaron Racing Drift Festival”
featuring team tandem, music, open track, and ProAm competition. Many
exciting details and announcements to come.

Full schedule, media application, pricing, and 2016 technical information can be found on www.GoldenGateDrift.com

Thank you to everyone who has been involved in our growth as a series. Luke Crowell