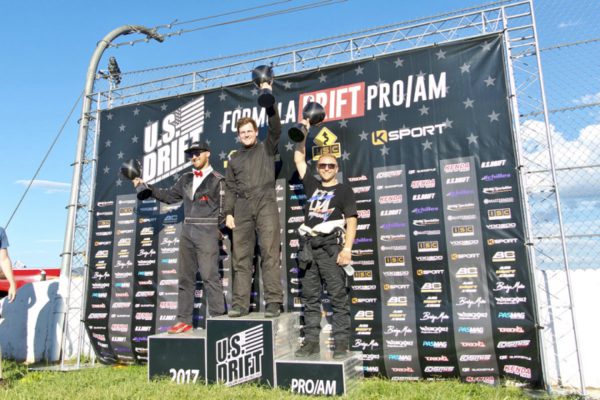 “Oval tracks are always a little intimidating to drivers, and then requiring them to run the high line next to the wall doesn’t help,” said Brian Eggert, event director at USDrift. “The course featured a high speed entry on the bank and then transitioned into the infield for the finish.“
Tanner Munson, from Hinesburg, VT qualified first in his LS2-powered Munson Motorsports BMW M3, but had to bow out of competition before his first battle due to transmission issues. The Final Four placed 8th place qualifier Mike Perez, from Leesport, PA in his 2JZ-powered Onward Energy / FlagNorFail Toyota Supra against fifth place qualifier Nate Richards, from Londonderry, NH in his V8-powered Magnum Performance Turbos Nissan 350Z. Perez would take the win sending Richards to the Consolation Round. On the other side of the bracket, second place qualifier Kenric Meyer, from Jamison, PA in his LQ9-powered BC Racing BMW M3 was paired up with third place qualifier Noah Michaels. Michaels would advance and go against Perez in the finals leaving Meyer to battle Richards in the Consolation Round. Richards would take the win against Meyers earning third place. In the finals, Perez and Michaels would battle so closely that the judges voted 2-1 for a One More Time. In the second matchup however, Michaels would advance and take the top spot and earning himself his first win in USDrift. END_OF_DOCUMENT_TOKEN_TO_BE_REPLACED 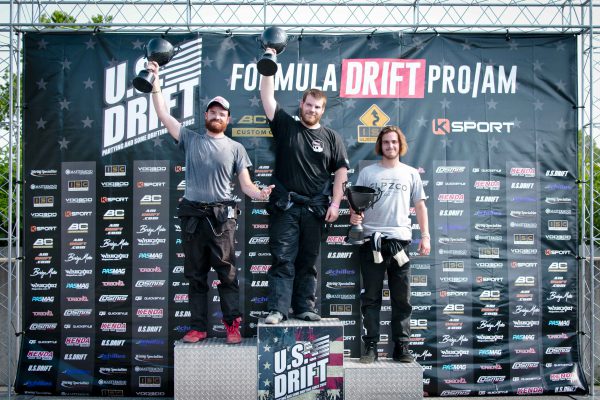 Glen Allen, VA – USDrift returned to Summit Point Motorsports Park, the site of the very first USDrift competition in 2002, to kick off the 2017 season on one of the hardest courses USDrift has ever held events on. Rookie USDrift competitor Ricky Hofmann, in his Onward Flipzco Nissan 240SX took the win and made the victory even more impressive considering it was his first time driving the course.  END_OF_DOCUMENT_TOKEN_TO_BE_REPLACED

USDrift and Midwest Drift Union joined forces earlier this month for their first ever BRO/AM collaboration event at the newly opened Dominion Raceway road course for both of their fourth and final rounds of the 2016 season. Each series would run their own Top 16 brackets with the winners from each series’ event competing against each other for bragging rights of the best on this side of the Mississippi River, as well as winning their weight in Smartmouth Brewing Company beer.

Repeating a similar end to that of the 2015 season, Austin Meeks from Spartanburg, SC would win the last event of the USDrift season again. This time Meeks would win in his Committed Service Brand swapped LSX V8-powered 1996 Nissan 240SX running on Achilles Radial Tires. Riley Sexsmith, from Hamilton, Ontario in his 2007 NV Auto 2JZ powered Subaru Impreza STI running on Achilles Radial Tires would take the win in the last event of the Midwest Drift Union season. END_OF_DOCUMENT_TOKEN_TO_BE_REPLACED