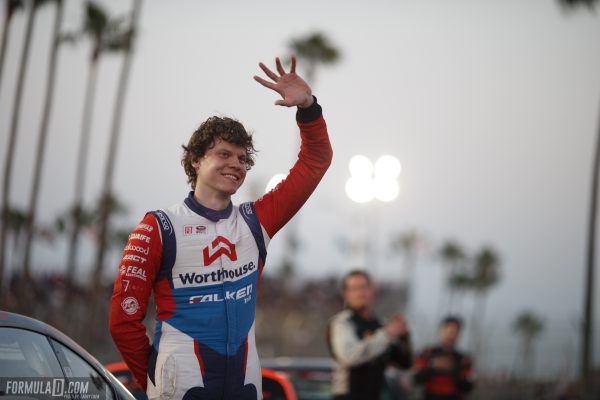 As is traditional, round one of the 2018 Formula DRIFT series took place on the Streets of Long Beach last weekend, with Frederic Aasbo climbing to the top step of the podium. Following the event, the city streets remain closed for the Toyota Grand Prix of Long Beach, which hosts the Motegi Super DRIFT invitational challenge on Friday and Saturday evenings.

The format is designed to entertain the TGPLB crowds and expose new fans to the sport. It involves eight top Formula DRIFT drivers who don’t score points towards the FD championship, but do compete for prize money presented by event sponsor, Motegi Racing.

The Motegi Super DRIFT Challenge is incredibly popular both with viewers on the Formula DRIFT livestream and the Grand Prix crowds, who remain until 830pm to see the victor crowned under floodlights.

The 2018 Motegi Super DRIFT Challenge would see one man rise to the top on both evenings. Piotr Wiecek dominated the proceedings, continuing the momentum that resulted in an event win at the 2017 final round, first place qualification at round one of the 2018 series and a third place finish at that event. Partnered with 2017 Formula DRIFT champion, James Deane, the Worthouse / Falken Tire team and its Nissan Silvia S15s are going to be a powerful force this year.

Wiecek’s rise to the top on Friday saw him run first against Alec Hohnadell in his Rain-X / Permatex / Nexen / Hoonigan Nissan S14 in the Great 8. Wiecek would then beat Alex Heilbrunn’s Team IMR \ Nitto Tire BMW M3 in the Final 4. This meant he ran against Forrest Wang’s Vapetasia / Achilles Radial / NRG Innovations Nissan S15 in the Final. Wang had taken second place in round one of the 2018 Formula DRIFT series after a year away from the sport and is in top form. However, Wiecek proved to be unstoppable and swept Wang aside to claim the win.

On Saturday evening, Piotr would again beat Hohnadell in the Great 8 before facing Forrest Wang again in the Final 4. After the two drivers ran together they split the judges’ decision, resulting in “One More Time.” The pair would repeated the runs and the decision eventually went to Wiecek.

Saturday evening’s Final was another thrilling battle, this time between Wiecek and Justin “JTP” Pawlak in his Roush Performance / Falken Tires / 2018 Ford Mustang. JTP had finished fifth in the opening round of Formula DRIFT and was another driver in strong form. And while the crowd was calling for “One More Time,” the judges narrowly gave the decision to Piotr Wiecek and the Worthouse / Falken Tire team.

We caught up with a very excited, champagne-soaked winner after the podium ceremony. “What an incredible weekend!” Piotr Wiecek exclaimed. “This is such an amazing track and I’m so happy to be here, and to win both events. I’m also happy that my wife and son were able to join me for the first time at such a special occasion. This was brilliant, and I must give special thanks to James (Deane) and Micheal (Sheehan) who did a great job in the paddock and as spotters. It was great fun and I hope I will be able to repeat it as soon as possible.”

The official results from the 2018 Motegi Super DRIFT Challenge are as follows:

Full results from both rounds of the 2018 Motegi Super DRIFT Challenge can be found at formulad.com