With only two rounds remaining in the 2018 Formula DRIFT season there are nine drivers in the Pro category and the entire Pro 2 grid with a mathematical chance to win their respective championships. This meant nobody could afford to relax as the Formula DRIFT Black Magic Pro Championship and Link ECU Pro 2 Championship arrived in Fort Worth, TX for Round Seven: Autozone Showdown presented by Rain X.

Even as the pressure was mounting on every team, the Texas weather threatened to add an extra dimension with rain forecast for Friday’s Pro 2 and Saturday’s Pro category heats. This didn’t deter the capacity crowd turning out to watch the penultimate round of what has become one of the hardest fought seasons in Formula DRIFT history.

PRO QUALIFYING
Fortunately, rain wasn’t a factor in the Pro qualifying session, which saw 2017 FD ChampionJames Deane (Ireland) top of the table at Texas Motor Speedway in his Worthouse / Falken Tire Nissan Silvia S15. Deane was leading the 2018 Formula DRIFT Black Magic Pro Championship as the teams arrived in Dallas, with a 32-point margin over second place Fredric Aasbo (Norway) in the Rockstar Energy Drink / Nexen Tire Toyota Corolla. Aasbo, the 2015 FD Champion, is coming off a win at the previous St Louis round and must have hoped for better than fourth place qualifying in Texas.

Second place went to Alec Hohnadell in the Rain-X / Permatex / Nexen / Hoonigan Nissan S14. He only made one qualifying run but the judges awarded him 96 points of a possible 100 for the singular effort. Sitting 14th in the championship, Hohnadell hoped to be a fly in the ointment for the series protagonists.

Third place in qualifying was awarded to Deane’s teammate, Piotr Wiecek (Poland) in the second Worthouse / Falken Tire Nissan Silvia S15. Placed third in the 2018 FD Championship, the Pole has a realistic chance of his first Formula DRIFT title and needed to keep pushing in the remaining two rounds.

Ryan Tuerck (USA) qualified fifth in the Ryan Tuerck Racing / Gumout / Black Magic / Nexen Tire Toyota 86. Sitting eighth in the series he has an outside chance of claiming his first FD Championship and is guaranteed to keep fighting to the end.

PRO HEATS
Qualifying first and third respectively for the Texas round of the Formula DRIFT Black Magic Pro Championship, teammates James Deane and Piotr Wiecek could hardly imagined they’d be facing each other in one of the most exciting FD Finals imaginable.

With a bye round in the Top 32, Deane met and narrowly beat Kenshiro Gushi (Japan) in the GPP Toyota Racing / Falken Tire Toyota 86 in the Sweet 16. He’d then face Daijiro Yoshihara (Japan) in the Turn 14 Distribution / Falken Tire Subaru BRZ in the Great 8. Dai had previously competed against Aurimas “Odi” Bakchis (Lithuania) in the Falken Tires / Maxxoil / Drifz Wheels Nissan S14 in the Sweet 16. The pair were inseparable, resulting in the judges requesting “One More Time.” The win went to Yoshihara, but he subsequently fell to Deane, who faced his arch-rival, Fredric Aasbo, in the Final Four. This would be another epic battle as both drivers sought to strengthen their position beore the Final round at Irwindale. Despite two very close runs, the judges gave the decision to Deane, who would face Wiecek in the Final.

Piotr’s path to the Final began againstKevin Lawrence (USA) in the Enjuku Racing / BC Racing Nissan S14.3. He then faced Matt Field (USA) in the Sweet 16 driving the Wish / Borla / Falken Tire Chevrolet Corvette. Field had finished second at the previous round and was looking for another podium visit and push Wiecek hard. The judges requested “One More Time,” much to the delight of the enthusiastic crowd, who cheered on both drivers. The win would eventually be given to Wiecek, who needed to defeat 2010 FD Champion Vaughn Gittin Jr in the Monster Energy / Nitto Tire Ford Mustang RTR to continue his advance. With Gittin Jr experience something of a points drought recently, he fought hard but Wiecek was unstoppable.

In the Final Four, the Pole faced Chelsea Denofa (USA) in the BC Racing / Nitto Tire / Ford Performance Mustang RTR. He had given the RTR team a much-needed taste of champagne with a third place in St Louis but also failed to halt Wiecek.

In what must surely be the Worthouse teams’ 2018 Christmas card photograph, the teammates lined up alongside each other for the Final. Expectations were high for a fantastic battle and the first run proved just how close it was going to be. However, Deane’s Nissan S14 shut down in the first corner of the second run and gifted the win to Wiecek.

With Wiecek taking maximum points from FD Texas, he closes on Aasbo, who finished third on the night. Second place Deane retained his lead in the 2018 championship but fans are guaranteed a nail-biter at the Final round at Irwindale Speedway, CA in four weeks.

We spoke to a beaming round winner as he stepped from the podium: “This was an awesome event and a very intense weekend for me,” said Wiecek. “Practice didn’t go as well as I’d hoped and I was unsure if we’d be competitive but we managed to get through each of the heats to meet James in the Final. That was an amazing experience for all of us. It’s unbelievable to be in first place – a dream come true.”

Second placed Deane was gracious in defeat, as always. “It’s amazing to be on the podium with Piotr and get a great result for the team. Fredric was third so the championship is really close heading into the final round at Irwindale and makes it a really exciting prospect. So we’ve got a few weeks to get the cars prepped and come back strong.”

Third place Aasbo was philosophical about the result: “We’re very happy with third place because we haven’t been able to figure out this track in the past and I feel like this was our best Texas round ever. This being Toyota Racing’s home town and it being an important weekend for the championship, we’re delighted to be standing on the podium and to be in the hunt. And even with the Worthouse boys showing us there’s a next level of drifting, we’re feeling very positive heading into the season finale.”

Although he wasn’t aware of it at the time, Aasbo’s podium helped Toyota clinch the 2018 Formula DRIFT Auto Cup. With one round remaining, Toyota has amassed enough points to take the manufacturer’s title, and do so at its home event. However, the fight for the Pro and Pro 2 drivers titles and the Tire Cup will be decided at the final round at Irwindale Speedway.

As always, the last word goes to Formula DRIFT president, Jim Liaw: “This was an action-packed weekend. It was incredibly competitive in both classes and we’re delighted to see both driver’s championships going down to the wire as well as the Tire Cup. It’s all leading to a really exciting Final at Irwindale Speedway and we’re looking forward to another successful season finale at the House of Drift.”

PRO 2 QUALIFYING
The qualifying session for the 2018 Formula DRIFT Link ECU Pro 2 Championship was incredibly close, with the top five drivers separated by just five points. Top of the charts was Dylan Hughes (USA) in the Advance Auto Parts / Nexen Tire Nissan 240SX. He has finished second in both of the previous 2018 rounds and he edged out Pro 2 category series leader, Travis Reeder (USA) in his Achilles Radial Nissan 240SX, who qualified second. The pair were only separated by a single championship point coming into the FD Texas, so the points gained in qualification could make the difference at the end of the season.

PRO 2 HEATS
The Formula DRIFT Link ECU Pro 2 Championship teams had to deal with a damp track at the start of the heats, which possibly contributed to some early mistakes. A number of drivers needed to make mid-drift corrections, included the Top 16 heat between Kelsey Rowlings (USA) in his Top 1 Oil / Achilles Tire Nissan S14 and Sean Adriano (USA) in the Design Craft Fabrication / Achilles Radial Nissan S13. Both drivers would be forced to lift the throttle, resulting in the judges requesting “One More Time,” with the drivers repeating both runs. This resulted in a win for Adriano who met top qualifier, Dylan Hughes, in the next round. Hughes had first defeated Kenric Meyer (USA) in the BC Racing / Achilles Tire BMW M3 and would also beat Adriano to proceed to the Final Four.

Hughes’ opponent would be fourth placed qualifier, Garrett Denton (USA) driving the Koruworks / Nexen Tire Nissan S14. Denton had overcome Josh Robinson (Australia) in the Winding Road Racing / Nexen Tire Holden Ute to advance through the Top 16, and Jonathan Hurst (USA) in the Dynosty Infiniti G37 to take the Top 8 win. He continued the momentum in the Final Four by beating Hughes and headed into the Final against Pro 2 category points leader, Travis Reeder.

Reeder’s day started with a win against Crick Filippi (USA) in the Fitzgerald Glider Kits / Nexen Tire USA Nissan S13 in the Top 16 and Ola Jaeger (Norway) in the Team Japan Auto / Nexen Tire Toyota Supra in the Top 8. He then met Sebastien Gauthier (Canada) in the Magicolor Carrossier / SSG Motorsport Nissan S14 in the Final Four.

Gauthier had vanquished Alec Robbins (USA) in the Koruworks / Achilles Tire Nissan 350Z in the Top 16 and Brody Goble (Canada) in the Frankenstein Speed & Custom / Achilles Radial Nissan S14.75 in the Top 8. Goble had a torrid first round, getting airborne after contact in his opening round against Troy Manners (USA) in the Neo Motorsport Nissan S14.5. Fortunately, he’d done enough to win the round and proceed to the Top 8 where he would lose to Gauthier, who in turn lost to Reeder in the Final Four.

The Formula DRIFT Link ECU Pro 2 Championship Final was finely balanced, with rookie Denton looking for his first FD win of the season. However, the weather played its hand and a thunderstorm forced the organizers to abort the Final. It was reschedule for Saturday morning when Denton put up a spirited fight but succumbed to Reeder. Denton would claim his first podium and take second place, with Hughes finishing third.

We caught up with Reeder after the podium celebrations, “Texas is always a rad track and we got the car dialed-in pretty quickly. I made a bunch of consistent runs and everything worked out in our favor, allowing us to finish on top. I’m stoked to be leading the points standings going into Irwindale – a track I’ve never driven but I’m looking to maintain my momentum and end the season with a positive result.”

NEXT ROUND
The Final round of the 2018 Formula DRIFT Black Magic Pro Championship and the Formula DRIFT Link ECU Pro 2 Championship takes place in Irwindale, CA on October 12-13. Visit formulad.com for event details, ticket purchases, driver profiles and Livestream information. 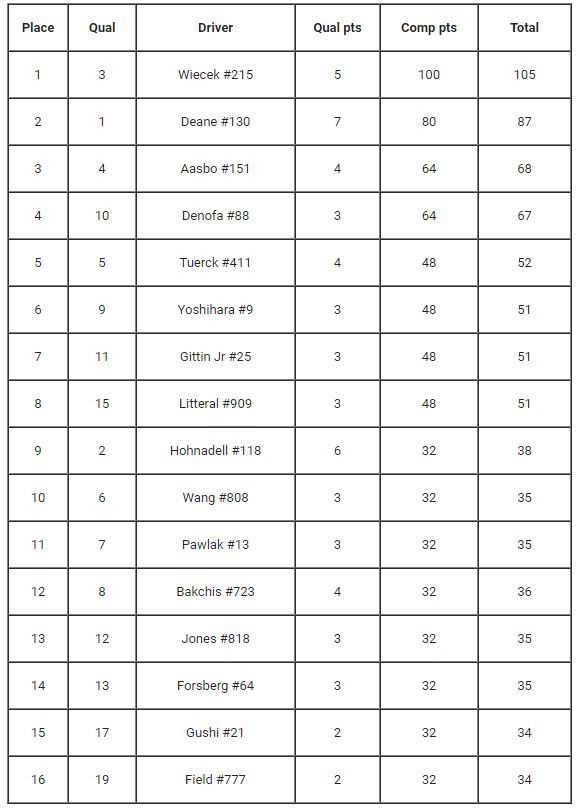 To view all the Pro Category finishers, click here:
formulad.com/results/2018/texas/pro 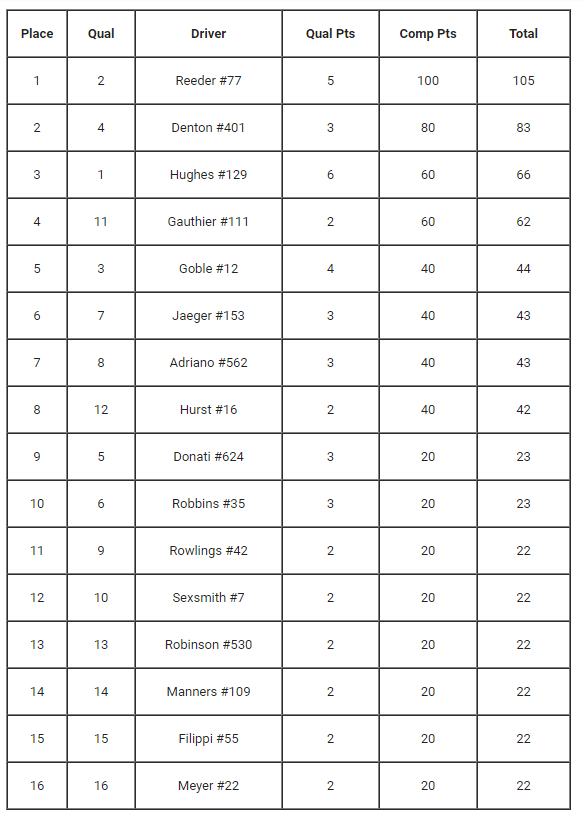 To view all the Pro 2 Category finishers, click here:
formulad.com/results/2018/texas/pro2 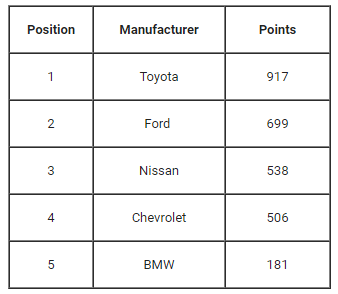 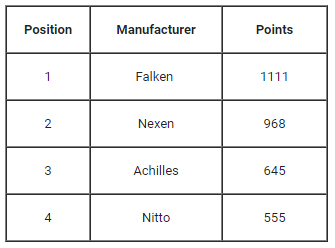 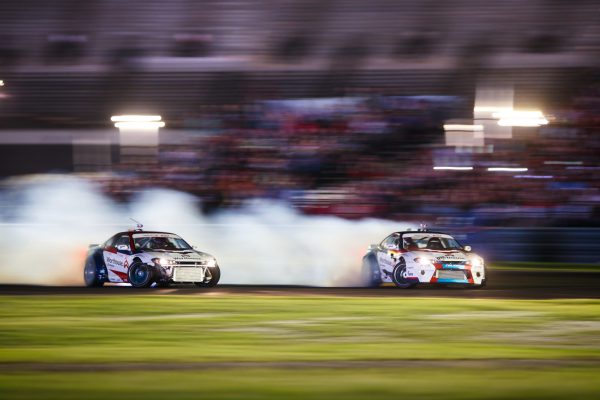 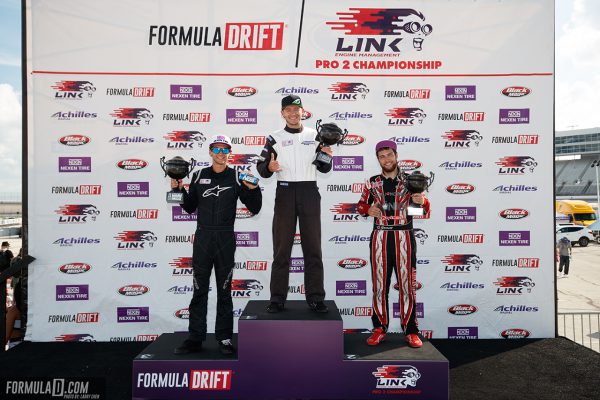 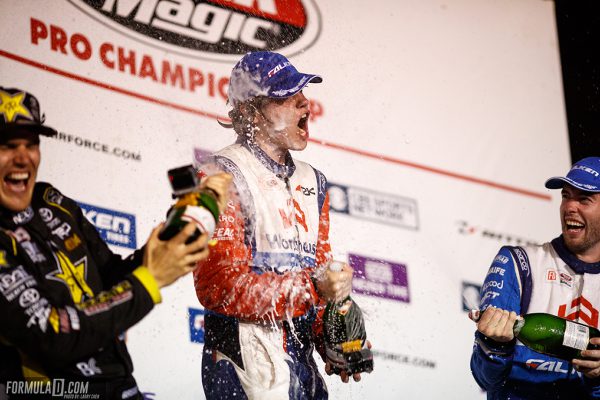