Chelsea Denofa has been stuck in a rut this season. Outside of his unexpected 3rd place podium finish in Orlando, Denofa has found himself consistently earning a first-round win in the Top 32 round, but losing in the Top 16 round of every other FD event this season. Frustratingly for Denofa, he had consistently out-qualified his Ford Mustang RTR and Nitto Tire teammate Vaughn Gittin Jr. In this round, the luck would fall Denofa’s way and the win at the Texas “Showdown” event just outside of Dallas would avenge a 29-event drought from the top step of the podium. 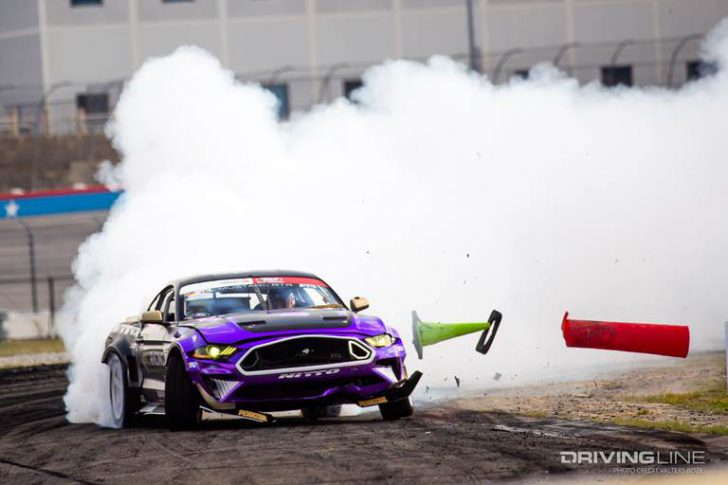 Qualifying
The qualifying bar at Formula Drift has been set exceptionally high this season, including the first perfect 100-point qualifying run that Justin Pawlak laid down at Wall Stadium since Tanner Foust last laid down a perfect score back in 2007. A small tweak to the layout of the Texas track compared to last season’s layout allowed the drivers to carry more speed, which made for a smoother overall flow to the track. James Deane used that tweak to his advantage, laying down the second perfect 100-point qualifying run of the season and taking the top qualifying spot. Odi Bakchis and Piotr Wiecek followed close behind Deane with identical 97-point scores, but Bakchis took the higher qualifying position thanks to a better second run score. Denofa would qualify seventh with a score of 93 points, besting Ford Mustang RTR teammate Gittin Jr. again as Gittin Jr. took 13th position with a score of 91 points. Gittin Jr. qualified just one position ahead of fellow Nitto Tire driver Travis Reeder, but earned a higher score on his secondary run which broke the tie. The final Nitto Tire driver Ryan Tuerck chased some car issues on qualifying day and squeeked into the competition in 29th position, but had the car back to full strength in time for the Saturday tandem battles. 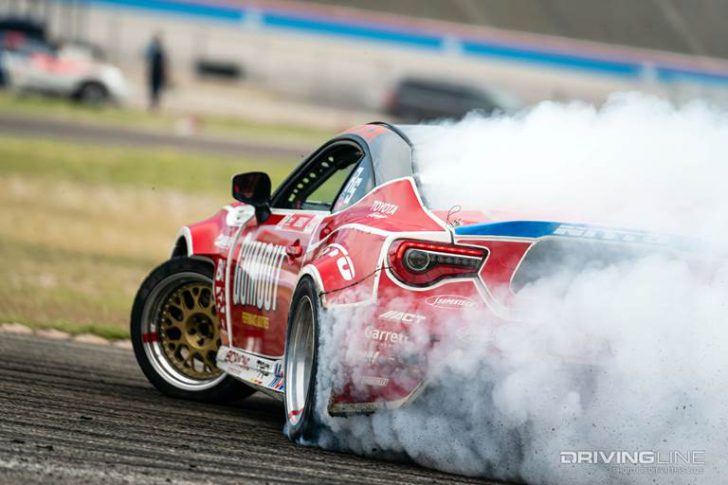 Top 32 and Top 16 Tandem Battles
Just prior to the Top 32 tandem battles, all drivers are given a 90-minute practice session to dial their cars into the current track conditions. Unfortunately, Vaughn Gittin Jr’s Ford Mustang engine experienced a fluke failure related to a rock lodging itself into the belt that drives the oil pump during the first run of practice. The team worked diligently to swap engines prior to Gittin Jr’s scheduled Top 32 tandem battle with Joao Barion, but fell just a few minutes short of making the call to battle. 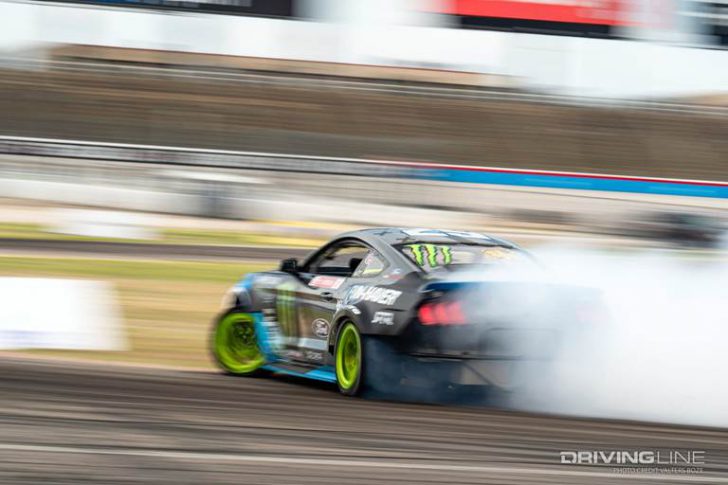 The first major upset of the Top 32 round of tandems came when Tuerck would defeat Justin Pawlak in the fifth battle of the round. Pawlak appeared to have a lead after a small mistake from Tuerck in the chase position, but Pawlak spun just prior to the final turn, handing the tandem win to Tuerck. Outside of Barion moving on due to Gittin Jr’s mechanical DNF, every other higher-qualified driver earned the tandem victory in the Top 32 round including Denofa and Reeder.

Top 16 would also go as expected as many of the higher-qualified drivers moved into the Great 8. While Tuerck was the lower qualified driver against Barion, many felt like Tuerck’s experience and strong-running car made him the favorite as he earned the win. Reeder would fall to Chris Forsberg in the round of 16, while Denofa would move past Ken Gushi in his tandem battle. Top qualifiers Deane, Bakchis and Wiecek would win their battles over Matt Field, Dean Kerney and Ryan Litteral respectively. 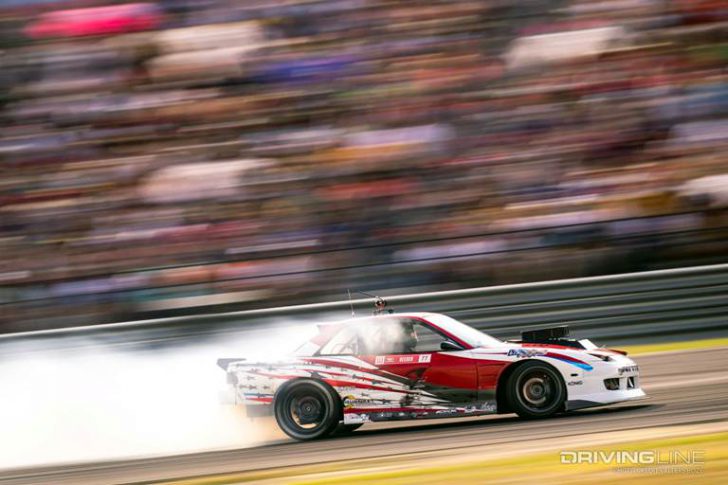 Top 8 and Beyond
In the Top 8, things got a little crazy. The initial matchup between Deane and Dai Yoshihara went fairly smoothly with Deane using a superior chase run to earn the victory over Yoshihara. Tuerck battled his Gumout teammate Forsberg in the second battle, but got too aggressive on his chase and tapped Forsberg’s rear quarter panel. Forsberg suffered a small amount of damage, but would repair his car and finish off the tandem to earn the victory. Both of the Top-8 battles on the other side of the bracket would end in contact as Bakchis hit Denofa twice when chasing him down into the last turn, while Wiecek would slide into Aasbo and both cars careened off of the tire wall in front of the judges stand in the other run. Thankfully, all four drivers were ok, although all four cars had varying amounts of damage that would require repairs. Since both collisions happened in the second half of the tandem battles, the driver at fault would not need to make repairs as their night was over. This meant that because Bakchis and Wiecek caused the collisions they were parked beyond the Top 8. 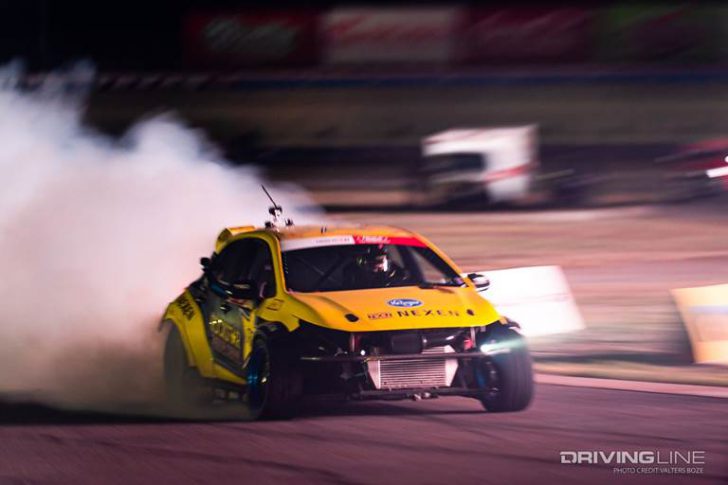 Thankfully, the teams behind Denofa and Aasbo were able to make repairs to the vehicles and prep them for the Final 4. The damage to Denofa’s Ford Mustang was largely cosmetic, and Denofa appeared at the line sans passenger front fender. Aasbo’s Toyota Corolla appeared to be much worse, missing a rear bumper, part of a rear fender, front bumper and headlights. The car apparently had major damage to the subframe and suspension components, but the Papadakis Racing team was able to get the car back into one piece for the Final 4. On the undamaged side of the bracket, Deane was able to defeat Forsberg in the first battle of the Final 4, and because Forsberg outqualified both Denofa and Aasbo, he was guaranteed third place on the podium. Denofa and Aasbo battled in repaired cars, and Denofa earned the victory. 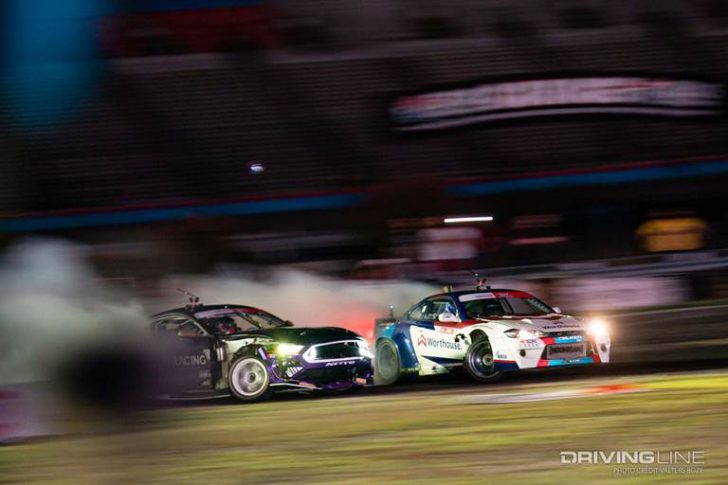 In the final battle, a single pair of tandem runs wasn’t enough, and the judges asked to see Deane and Denofa run again. During the “One More Time” battle, Denofa pushed big angle in front of the first inner clipping point in front of the grand stands to throw Deane off his game and earn the victory. Deane admitted in an interview that he was nearly blind behind Denofa due to all the tire smoke coming off of the Nitto NT555 G2 tires, a feeling he wasn’t used to. 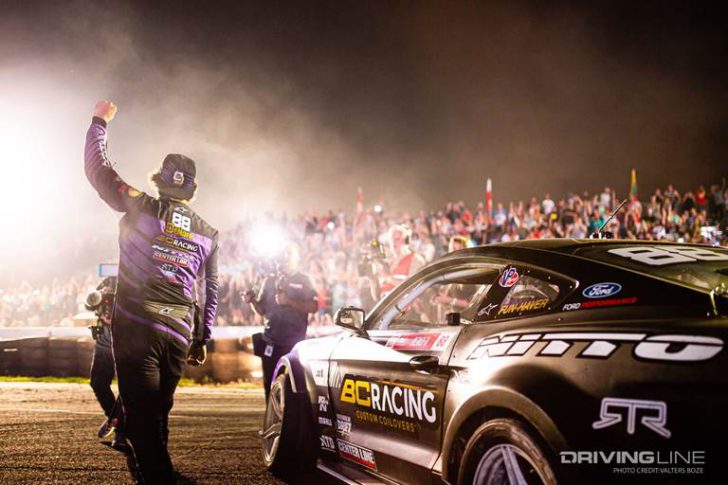 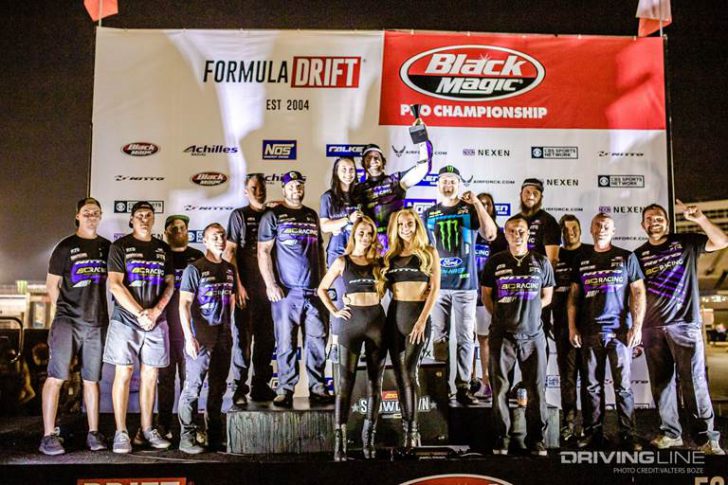 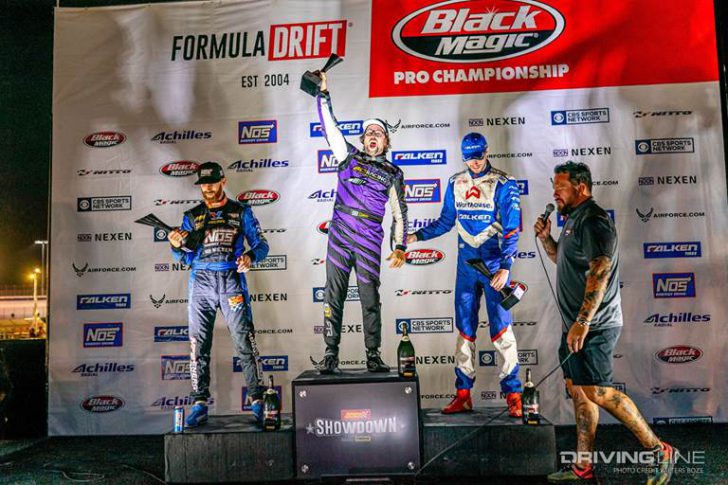 The final event of the 2019 Formula Drift racing season will take place on October 18th and 19th at Irwindale Speedway, just outside of Los Angeles, California. The Irwindale event is always one full of carnage as drivers go “full send” with plenty of time to make any repairs ahead of the 2020 season. With a championship and Rookie of the Year titles to be finalized, the next event is sure to be exciting!