As the first Formula Drift event of the season wrapped up in Long Beach, California, Ryan Tuerck was unsure of what car he would compete in for the second round in Long Beach. With just three weeks and a 2,500+ mile tow between Long Beach and the second round in Orlando, Florida, Tuerck and his Race Service team knew they had to make a quick decision. As many drivers took it easy on Sunday following the race, Tuerck and his team tore his competition Toyota GT86 down to the bones to evaluate the crash damage from a collision with the tire wall at the end of the final practice prior to the Top 32 tandem battles. The results weren’t very promising. A twisted strut tower, a rippled firewall and a transmission tunnel that looked more like an arch than a carefully fabricated tunnel were all signs that the chassis had probably seen its last competition.

Tuerck took to social media to announce that the chassis was probably done. “Still in a bit of disbelief this is the last time I will step out the drivers seat in this car,” said Tuerck on his Instagram post. Thankfully, Tuerck had another Toyota GT86 chassis with a Formula Drift ready cage available to him that had previously drifted at Gridlife South and other events. In just 10 days, the car went from a tandem-ready street car to being a full fledged, Formula Drift worthy competition car. With Tuerck still suffering from whiplash and a concussion, he was unfortunately not allowed to do any heavy work, so his crew chief Brian Hartsock and fabricators Dominic Biro, Nick Byatt and Russell Walker all worked together to get the car completed in time for the long transport over to Orlando, Florida. 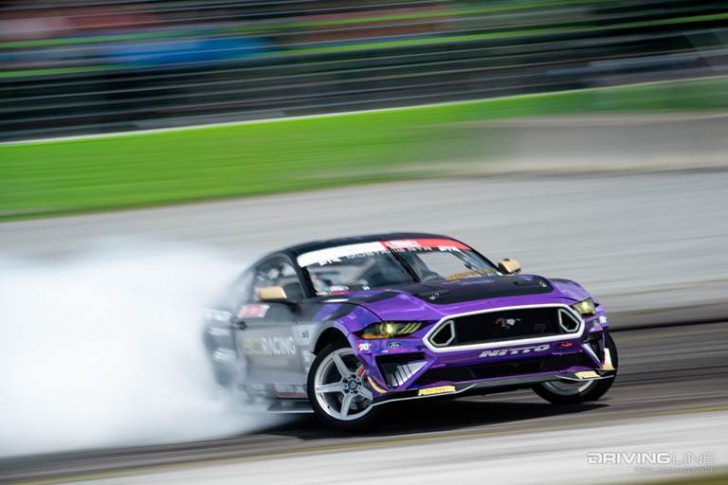 As qualifying fired up on the Orlando Speedworld track, Tuerck and the rest of the Nitto Tire drift team were all looking very competitive. With an incredible 95 point run, it looked like Tuerck would be flying high, but all the drivers really rose to the occasion and put down some insane runs, meaning Tuerck only qualified 15th. The top qualifying position was taken by Fredric Aasbo with 99 points, while Dai Yoshihara would also earn 99 points but lose via a tiebreaker to qualify second overall. Fellow Nitto Tire drivers Chelsea Denofa (97 points, Q6), Alex Heilbrunn (95 points, Q13), Vaughn Gittin Jr. (94 points, Q16) and Travis Reeder (91 pts, Q18) all earned their way into the Top 32 tandem competition on Saturday.

We Talkin’ About Practice?
Eying up the qualifying order and the level of competition in practice, it was apparent that nearly any driver could win the event. Saturday’s weather conditions were clear and sunny, which meant the track would be much grippier than the Friday qualifying conditions that were partially wet for the first run and overcast for the second run. As drivers were getting more comfortable with the level of grip in the morning practice session, they began to push it even further. Unfortunately for Vaughn Gittin Jr., his RTR Ford Mustang tapped the wall midway through the high speed bank while he was leading Ryan Litteral. Litteral was unable to react fast enough to avoid Gittin Jr., and the rear of Litteral’s 350Z made contact with the front tire of Gittin Jr.’s Mustang. 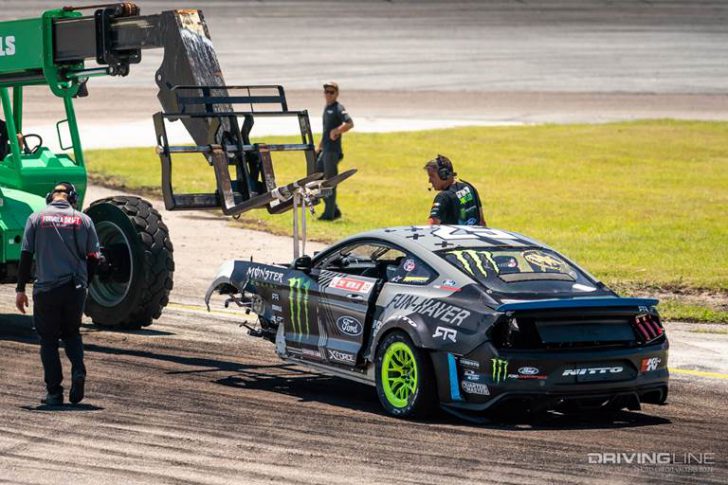 The front suspension of the Mustang was destroyed in the collision, and the car scraped to the flat bottom of the track where a forklift was required to pull the car off course. All of this happened in the waning minutes of the practice session, and with Gittin Jr. scheduled to be just the second tandem battle on deck, the team had just minutes to repair the vehicle. The crash was eerily similar to Tuerck’s wreck in Long Beach, as it happened in what would end up being the final run of the final practice before the tandem battles began, giving the team minimal time to repair the car.

Tandem Battles Heat Up in Orlando
Fortunately, the Ford Mustang RTR team was able to pull together a new subframe, brand new suspension and repair the front end well enough to compete in his tandem battle. Gittin Jr. was allowed to run without headlights or front fenders in his battle with Dean Kearney’s Oracle Lighting Dodge Viper, and neither driver took it easy in the tandem battle. Gittin Jr. was able to squeak out a small lead ahead of Kearney in his lead run and stick a bit closer to Kearney in the chase run to earn the Top 32 tandem victory. 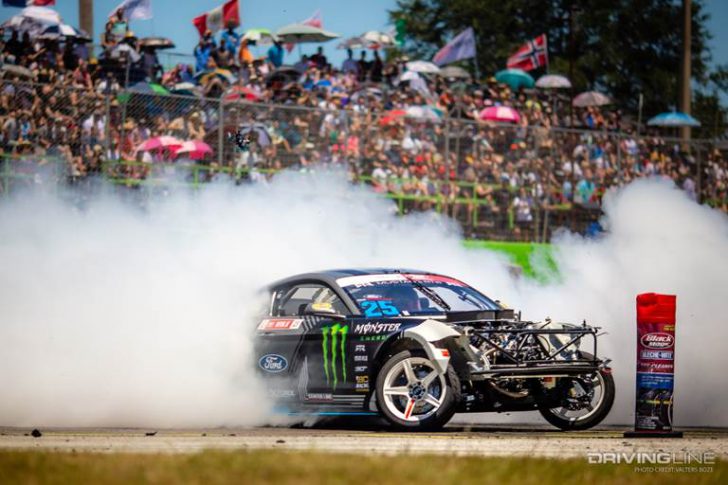 In Long Beach, the damage was too much for Tuerck and his team to repair the car. Tuerck took to the track a few tandem battles later, facing fellow Nitto Tire teammate Travis Reeder who was again driving his Nissan S13 car instead of the Electric-powered Chevy Camaro that was expected to debut in Long Beach, this time due to a parts failure during a mid-week practice session instead of the drama that left his car parked in Long Beach. Tuerck emerged the victor of the tire teammate battle, moving into his first Top 16 round of the season. Alex Heilbrunn and Chelsea Denofa also won their Top 32 tandem battles against Alec Hohnadell and Taylor Hull respectively, giving Nitto ¼ of the remaining 16 drivers. 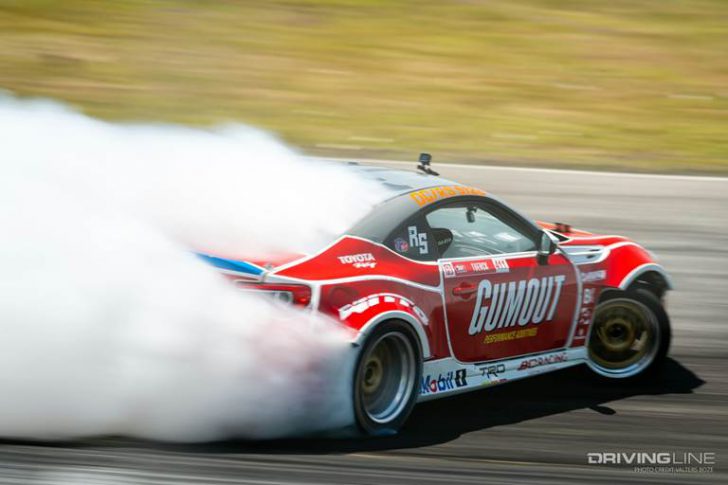 After a brief halftime break that included autograph signings and Opening Ceremonies in front of the crowd, the battles got even tighter. Gittin Jr. was able to eliminate top qualifier Aasbo in the first Top 16 battle after a “one more time” sudden death round, and moved past Forrest Wang’s Get Nuts Nissan S15 in the Top 8 to earn his first Final 4 appearance of the season. His Ford Mustang RTR teammate Denofa also won his Top 16 battle when he eliminated Matt Field’s Chevy Corvette, and also stamped his ticket into the Final 4 by defeating Piotr Wiecek’s Worthouse Nissan S15 in the Top 8. Pushing two cars into the Final 4 guaranteed that a Nitto Tire Ford Mustang would earn a podium spot, but both drivers had their hopes set on the top step. Tuerck’s rebound journey ended in the Top 16 at the hands of second place qualifier Dai Yoshihara, while Heilbrunn was on the losing end of his Top 16 battle with Justin Pawlak. 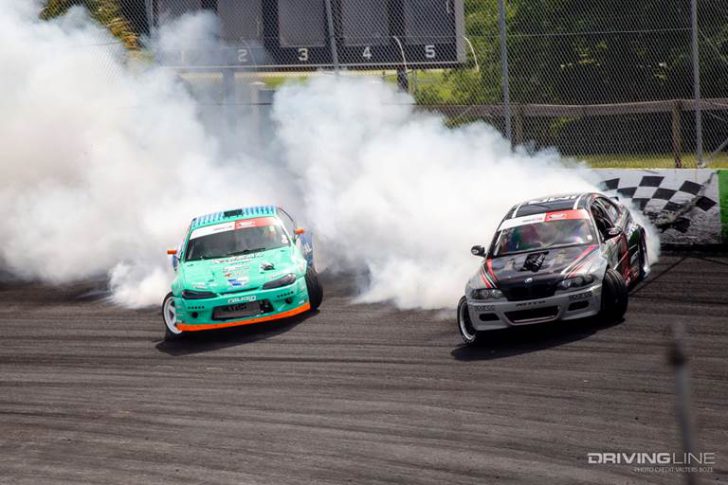 Gittin Jr. would face Long Beach winner Odi Bakchis in the first Final 4 battle, while Denofa would face Chris Forsberg’s NOS Energy Drink 370Z in the second battle. Gittin Jr. pushed Bakchis to a pair of “One More Time” tiebreakers before narrowly being defeated, while Denofa spun chasing Forsberg to end his day. Since Denofa was the higher qualifying driver between him and teammate Gittin Jr., he earned the final position on the podium. Denofa’s return to the podium marked his second podium in three events, dating back to the season finale last year at Irwindale where he also took third place. Gittin Jr. was very thankful after the event that his team could get the car back on track and get the car competitive enough to make it to the Final 4 and happy to have teammate Denofa on the podium. Bakchis earned the win over Forsberg for his second consecutive victory due to Forsberg debeading a tire in the first lap of the battle. Bakchis now carries a 56 point lead over Chris Forsberg, while Denofa (6th) and Gittin Jr. (8th) remain in the Top 10 overall in championship points after the weekend. 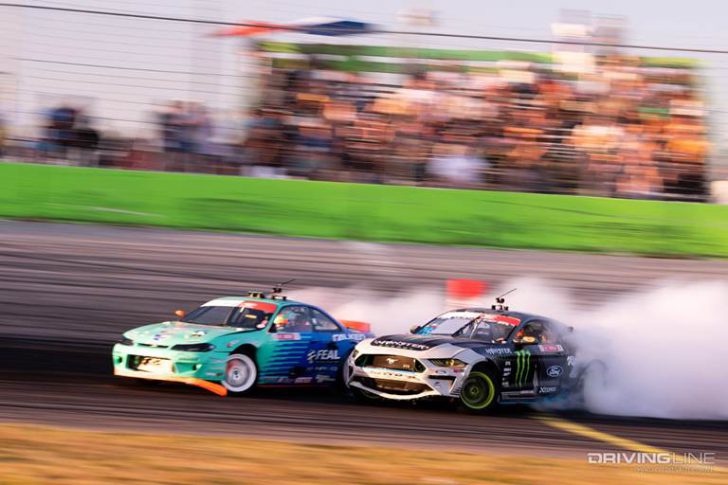 Looking Ahead
“We had a hell of a night. I shouldn’t have even made it out for my top 32 battle, the car looked like Frankenstein out there,” said Gittin Jr. after the event. “These trials and tribulations, and falls to the bottom and rises to the top and the challenges with drifting is why I’ve been doing it for 16 years, because it’s not easy.” 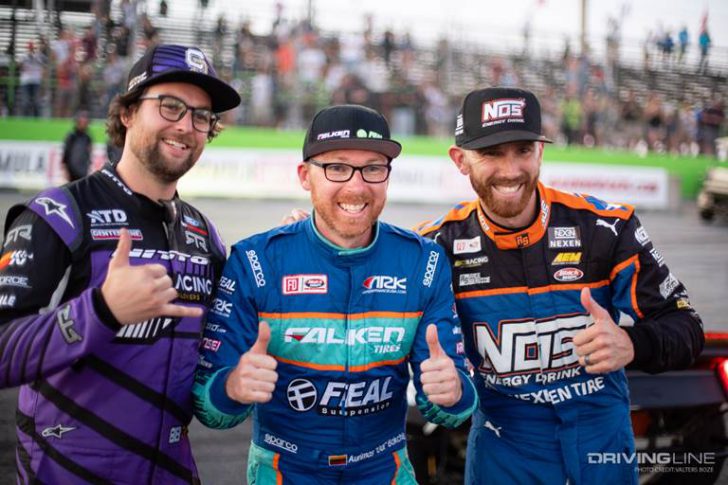 Chelsea Denofa was equally satisfied with the weekend as well. “We ended up in third place. We really wanted a final round appearance but had a small misjudgment in our Final 4 battle. I broke a tie rod after I collided with Forsberg, but overall we’re really happy with the weekend. The team was killing it, they repaired my car after the crash so I could go out there for the awards presentation, I can’t say enough about the Ford Mustang RTR team and how hard they worked all weekend,” said Denofa after the event ended.

The third stop of the eight round Formula Drift Pro Championship takes place at Road Atlanta in Braselton, Georgia on May 10th and 11th.