Formula DRIFT Round 4: All In Results;
Tanner Foust Takes the Victory and Chris Forsberg Moves to Top Spot

Long Beach, Calif. – July 12, 2009 – Formula DRIFT returned to Las Vegas Motor Speedway for Round 4: All In. Champion Tanner Foust takes the victory in his Rockstar / Hankook Scion Racing tC, while Chris Forsberg in the NOS Energy Drink / Maxxis Nissan 350Z moves to the top position overall in the chase for the Formula DRIFT Pro Championship.

“Las Vegas continues to be one of the top destinations for the circuit despite the triple digit weather,” said Ryan Sage, vice president of marketing and co-founder of Formula DRIFT. “The fans continue to come out in droves and we had another sold out event. The drivers continue to step up their level of drifting and we’re seeing a real chase for the Championship.”

Chris Forsberg took over the point lead after a close battle with Ryan Tuerck, who was ranked #2 going into the event, in the Great 8 round. Forsberg then went on to defeat Tyler McQuarrie, in the Falken Tire Nissan 350Z, in the consolation round for 3rd place. The final battle was between Hankook Tire teammates Tanner Foust and Ryuji Miki, piloting the APEXi / Hankook Mazda RX-7. Foust proved why he is the returning champion and blinded Miki in the first run with a cloud of thick smoke that caused Miki to lose his drift, while giving chase in their first tandem run giving Foust the advantage. With a solid 2nd run, Foust was able to sit on top of the podium once again.

“The Rockstar team and I went from zero to hero after failing to qualify for the main competition last event,” said Formula DRIFT champion Tanner Foust, winner of Round 4: All In. “I am so proud of my team and they worked hard to fix the issues of the Rockstar Scion tC and I now feel comfortable and feel that this car has more potential than the Nissan 350Z ever had.”

Round 4: All In Event Results

On July 12, BFGoodrich is taking over the Outfield Road Course at Las Vegas Motor
Speedway and putting 25 people into the passenger seats of high-performance cars
fitted with KDW tires. Several Formula D cars will be part of the event, including
the Nuformz Viper SRT-10 (with Sam Hubinette driving) and two Supercharged Infiniti
G35s from Drift Emporium. Every ride along will be filmed from four angles, so you
won’t miss a single moment of the pro drivers pushing the tires (and the passengers)
to the limit.

Visit bfgoodrichtires.com/kdw for more details and live coverage. And be sure to
check back a few weeks later for the full video highlights.

Rest assured…some passengers will love it, some will hate it, and some might lose
their lunch. 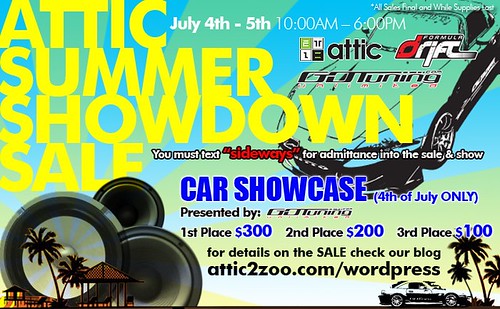 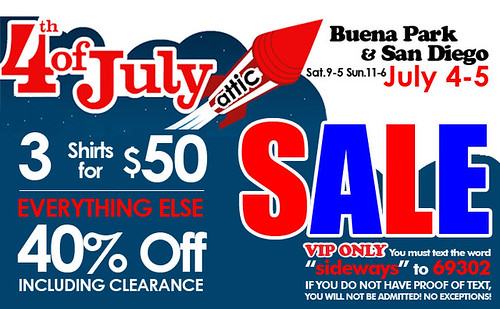 Text in “sideways” to 69302 for admittance into the sale. NO EXCEPTIONS!

Rules: Entries will be made via email to [email protected] In the email body, please include your full name, contact number, a car resume, and pictures of your car exterior, interior, engine bay (JPEG files)

LOCAL entries preferred unless you are willing to make the trek to Buena Park, CA to showcase…

We will pick the TOP 16 Finalists from the entries received. Those TOP 16 will be showcased LIVE at Attic Buena Park on July 4th 2009. During the Main Event Sale, Attic customers will be handed 1 ticket to vote for their favorite car and the winners will be determined when the votes are tallied up. The TOP 3 will be awarded CASH PRIZES! No politics, we let the people decide the fate…

Formula DRIFT Announces Schedule Change for 2009 Season;
Round 6: Locked and Loaded to be Added to the Indy Grand Prix of Sonoma on August 21-22, 2009

Long Beach, Calif. – June 25, 2009 – Formula DRIFT has announced a schedule change for the 2009 season. Round 6: Locked and Loaded at Infineon Raceway will be re-scheduled from September 12 to August 21-22. Formula DRIFT has been added to the Indy Grand Prix of Sonoma race weekend.

“Formula DRIFT continues to bring drifting to the big leagues with the addition of our event to the Indy Grand Prix of Sonoma,” said Jim Liaw, president and co-founder of Formula DRIFT. “Motorsports fans will be able to experience the 110+ mph average speeds of open wheel racing and all the sideways action of Formula DRIFT in one weekend.”

Formula DRIFT drivers will be amongst the biggest stars in IndyCar racing, including Helio Castroneves, Danica Patrick, Dario Franchitti, Marco Andretti, Graham Rahal, and more. Fans will be treated to both drifting and IndyCar Series racing during the Indy Grand Prix of Sonoma weekend. Tickets may be purchased on the Formula DRIFT website, 2-day Friday/Saturday pass will run $35. Special ticket discounts will be available through various Formula DRIFT media and promotional partners.

The Indy Grand Prix of Sonoma will be held on the weekend of Aug. 21-22 at Infineon Raceway. The Formula DRIFT Pro Championship Round 6: Locked and Loaded is scheduled for August 21 and 22. The change in the schedule will open up a longer break heading into the Finals in Irwindale on October 16-17 leaving time for teams to prepare and for Formula DRIFT to organize promotional activities leading into the Finals.