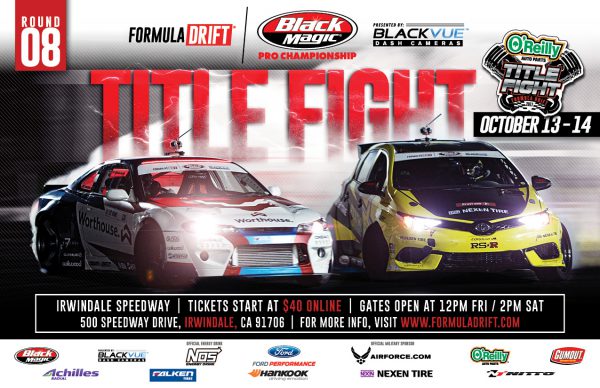 The final event of the season never fails to disappoint with drivers putting it all on the line for their chance to complete their season on top of the podium on a high-note. The high-energy and exciting competition at Irwindale Speedway is one of the largest drifting events in the world and will feature world-class drivers, fan midway featuring over 60 companies on display, the AutoCon car show, and the crowning of a champion.

“Formula DRIFT has always showcased the best drifters from around the world and the level of international talent within the Series is at an all-time high,” said Jim Liaw, president and co-founder of Formula DRIFT. “The chase for the championship will come down to the wire with previous champion, Fredric Aasbo, from Norway battling against Irishman James Deane with Latvian driver, Kristaps Bluss and former champion, Michael Essa on their heels.”

Tickets are now available for Round 8: Title Fight, including reserved seating, 2-day ticket packages, and VIP tickets and can be purchased through www.formulad.com. Ticket prices start at $40 online with all seats reserved for Saturday’s competition day. VIP experiences are also available for purchase including reserved seating, front of the line autograph pass, and VIP track walk.

For more information visit, www.formulad.com and find Formula DRIFT on Instagram @formulad, Facebook www.facebook.com/formuladrift, Twitter @FormulaDrift, and Snapchat – formula_drift. Tune into Formula DRIFT on CBS Sports and check your local listings for airtimes and on the Formula DRIFT Livestream.

Long Beach, Calif. – June 18, 2014 – Tickets for the final event of the 2014 Formula DRIFT Championship season are on-sale now. Round 7: Title Fight on October 10-11, 2014 will be held at Irwindale Speedway. VIP Experience ticket options are available.

The 2014 Formula DRIFT season will come to a close on October 10-11, 2014 at Irwindale Speedway. For the past five seasons the event has sold out and early purchase is highly recommended. Tickets are on-sale now and available HERE.

Reserved seats are available in the main grandstand and trackside grandstand for Saturday or Two-Day including Friday and Saturday. New for this season is the option to purchase a VIP Experience which includes a reserved seat ticket in either the main grandstand or trackside grandstand, VIP track walk during opening ceremonies, priority line for the driver autograph session held on Friday, express entrance and a collector’s edition credential. Additionally, the main grandstand sky box VIP suite is available to a limited 24 people that will include a seat in the sky box, food and drinks for both Friday and Saturday and the benefits of the VIP Experience.

“For the past five seasons, the finale at Irwindale Speedway has been our largest event,” said Jim Liaw, president and co-founder of Formula DRIFT. “To ensure that fans do not miss out on the action and reserve the seat they want, we suggest fans to purchase their tickets early. The last event of the season has always been a remarkable experience with the chase for the championship coming to an end and a champion being crowned.”

The championship chase continues into Round 4: The Gauntlet at Wall Speedway this weekend, June 20-21, 2014. For more information visit: www.formuladrift.com and find Formula DRIFT on Instagram @formulad, Facebook www.facebook.com/formuladrift and Twitter @FormulaD. 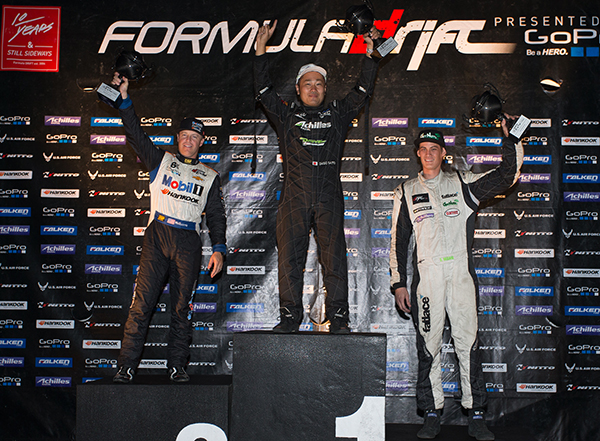 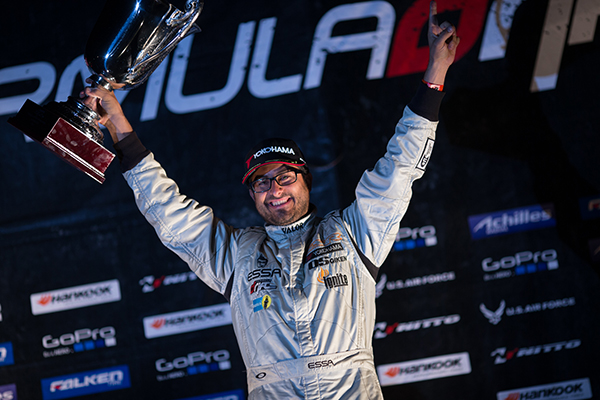 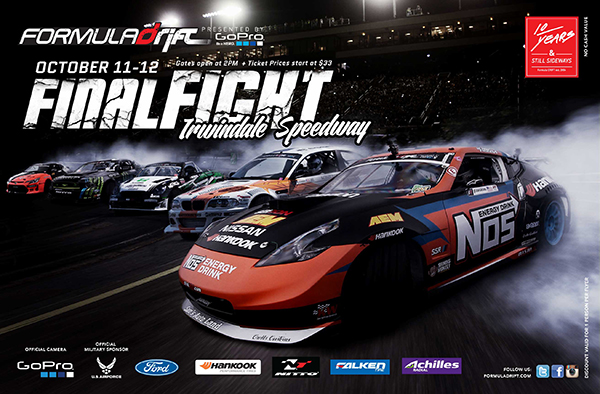 For those attending the finale at Irwindale Events Center, as of Thursday, October 10th all Reserved Grandstand seats and Trackside VIP may be sold out. Once those seats are sold out we are offering GA admission tickets for $26, in limited quantities, until we can no longer sell anymore. This number will be based on capacity constraints as dictated by venue officials and the Fire Marshall. These tickets will get you access to the venue, but no guaranteed seats. Additionally, it is quite possible that walk-ups may be denied access to the event if inventory is gone, so we strongly encourage you to buy tickets online while it is still possible. The ticketing link is here: https://tix.extremetix.com/Online/?siteID=3477&cartID=9f1e9b3c-7354-4ed0-9392-c5bf86005f95

Next, due to the increased traffic, Formula DRIFT has also added a secondary parking lots located here:https://mapsengine.google.com/map/edit?mid=zlkBZLtCq1dw.kG-bWnNtwrR4 There will be shuttles servicing this lot and the events center from Noon to Midnight on Saturday only, or you may walk. 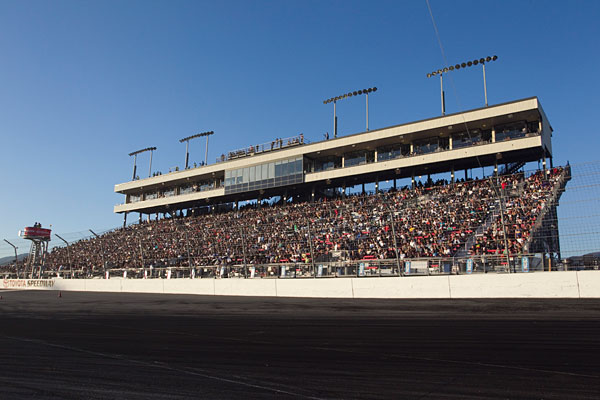 Formula DRIFT will be the first major event to return to Irwindale Speedway since the new management group has taken over the day-to-day operations of the venue. The event has sold out for the past two seasons and to accommodate the growth in attendance expanded seating will be made available. Tickets are on-sale now and available on www.formulad.com. Tickets are expected to sell-out again and early purchase is highly recommended.

“Irwindale Speedway is hallow ground for drifting, something that we made it to be. So it’s significant not only to our Series but to the world drifting community,” said Jim Liaw, president and co-founder of Formula DRIFT. “We are both proud and excited to be able to continue to hold the finale of our ninth season at Irwindale and look forward to closing our tenth season there as well.”

With less than 63 points separating the top 5 drivers leading into Round 6: After Dark at Las Vegas Motor Speedway, the chase for the Championship is as close as it has ever been. Round 7: Title Fight will also feature the revealing of the 10 year anniversary logo, announcement of the Tires.com Triple Crown winner, the Slammed Society car show, the Formula Drift ProAm All Star competition along with much more.