Daijiro Yoshihara Takes the Victory and the Lead in the Tires.com Triple Crown 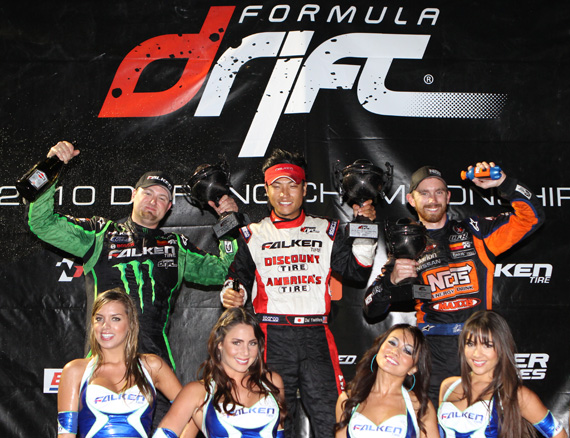 Long Beach, Calif. – May 8, 2010 – Formula DRIFT returned to the site of the inaugural event at Road Atlanta for Round 2: Road to the Championship. Daijiro Yoshihara in the Discount Tire / Falken Tire Nissan S13 takes the victory and the lead in the first event of the Tires.com Triple Crown.

For the seventh straight season, Formula DRIFT brought drifting back to Road Atlanta and provided exciting action for all the die-hard drift fans in the South. The thousands of fans that came to watch the event were treated to great weather as temperatures dropped dramatically for the main event day. The competition was as exciting as ever with the drivers pushing the limits of their vehicles through one of the best courses for drifting.

“It all started over seven years ago here at Road Atlanta,” said Jim Liaw, president and co-founder of Formula DRIFT. “Each year the drivers and teams have stepped it up and the level of competition is as tight as it has ever been. This is a great sign of the constant evolution of this still emerging sport.”

Round 2: Road to the Championship showcased intense tandem action that kept fans in their seats throughout the day and into the evening for the final battle. The consolation round for third place was between champion Chris Forsberg in the NOS Energy Nissan 350Z and Michael Essa in the Nitto Tires / GSR Autosport BMW 350R. Essa made it the furthest in his career after failing to make the Top 32 during Round 1. Forsberg showcased why he is the current champion and why he won the the event at Road Atlanta last season by beating out Essa for third place. Daijiro Yoshihara earned the victory with solid driving throughout the weekend and made his way to the Tires.com Triple Crown leaderboard. The final battle was between Yoshihara and winner of Round 1: Streets of Long Beach, Vaughn Gittin, Jr. in the Monster Energy / Falken Tires Ford Mustang with Yoshihara edging his way past his Falken Tires teammate. Gittin found the podium for the second consecutive event and retains the lead in the Formula DRIFT Pro Championship points standings.

“I am so excited to be back in the game,” said Daijiro Yoshihara, winner of Round 2: Road to the Championship. “I haven’t been on the podium for two years and I proved to myself that I can compete once again in Formula DRIFT. Formula DRIFT is the most competitive series in the world and it feels great to be on top. I couldn’t have done it without the help of my sponsors at Discount Tire, Falken Tire, KW Suspension, Sparco, and the crew at SPD Metal Works.”

The action continues on June 4-5, 2010 for Round 3: The Gauntlet at Wall Speedway in New Jersey. Tickets are available on-line. For more information and details visit the Formula DRIFT website at: www.formuladrift.com

Round 2: Road to the Championship Event Results 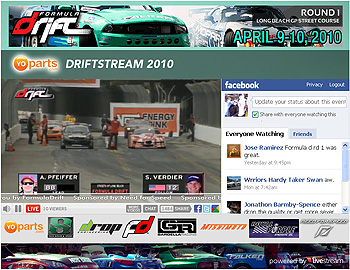 Long Beach, Calif. – April 26, 2010 – Formula DRIFT launched the new Drift Stream with YoParts.com at Round 1: Streets of Long Beach with over 70,000 fans tuning in to watch the event live.

The Drift Stream debuted to rave reviews from drifting fans across the globe after the announcement was made last month of the partnership of Formula DRIFT and YoParts.com to bring live interactive streaming to the 2010 Pro Championship season. The Drift Stream debuted at Round 1: Streets of Long Beach with over 45,000 unique visitors watching live over the weekend. The Formula DRIFT fans consumed over 1.6 million minutes of action in the 2-day event weekend.

Fans watched on multiple websites and mobile devices that included the Formula DRIFT website, Facebook, and various personal websites and blogs. Viewers watched from over 128 countries with the country of Norway leading the way with over 5000 fans cheering and watching their countryman Fredrick Aasbo make his official Formula DRIFT debut and finishing fourth place overall at the event. 25,000 unique visitors also utilized the “On-Demand” feature of the Drift Stream player to watch all of the action from both Friday and Saturday’s event.

“Overall we are excited to bring the Formula DRIFT experience to a worldwide audience in a way that would encapsulate a live look and feel and it was made possible through the support of Formula DRIFT, Belle-1 Communications, Mishimoto Automotive, Royal Purple and Need for Speed,” said Tom Masiero, co-founder of YoParts.com. “We were able to make that happen and are excited about creating a better viewing experience each event for the Formula DRIFT fan base.”

The Drift Stream will continue at Round 2: Road to the Championship on May 7-8 in Braselton, GA when Formula DRIFT returns to Road Atlanta. Last season Round 2 proved to be one of the most entertaining and exciting events of the season with Formula DRIFT champion Chris Forsberg taking the victory on his way to the championship. 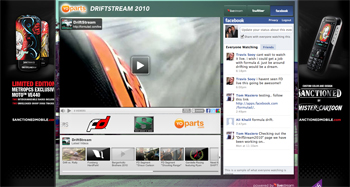 “As part of our continued alliance with Universal Technical Institute, the Official Technical School of Formula DRIFT, UTI and FD are collaborating to bring forth the 2nd Annual UTI / FD Tech Day,” stated Jim Liaw, president and co-founder of Formula DRIFT. “Tech Day is a fun day where fans can come and get a glimpse of the new cars for the 2010 season, meet the new and returning drivers as well as have an open house tour of the top class UTI Rancho Cucamonga campus. It’s been a good off-season but now we are all excited to get the season started and March 27th at UTI will be the unofficial start of the 7th FD season.”

Over 24 of the top Formula DRIFT teams will be bringing out their 2010 competition vehicles for annual technical inspection. This will be the first glimpse of many new vehicles and drivers including Samuel Hubinette’s new Dodge Challenger, Michael Essa’s new BMW 3-series powered by a M5 motor, and the 4-rotor Mazda RX-8 of BMI Racing. At 1pm Nitto Tires will announce their official drive lineup for the 2010 Formula DRIFT season. Attendees will also have the opportunity to meet Formula DRIFT drivers, teams and techs, and watch the pre-race inspection live. On hand will be industry displays, food vendors and promotional giveaways (while supplies last) that include Round 1: Streets of Long Beach tickets. An autograph session with Formula DRIFT pro drivers will be held at 2pm with confirmations from Vaughn Gittin, Jr., Ken Gushi, Dai Yoshihara, and the 2009 champion Chris Forsberg.

For prospective students interested in automotive training, UTI will provide tours and information about its various technician training programs and financial aid. (Financial aid is available for those who qualify.) Instructors and graduates will be available to speak to individuals interested in careers in the automotive industry.

“UTI is honored to continue as the ‘Official Technical School of Formula Drift’ and host Tech Day at our Rancho Cucamonga campus to kick off the 2010 series,” said Mark Harston, events manager at Universal Technical Institute. “The relationship between UTI and Formula Drift is complementary. We are always looking for ways to give back to the community and motorsport enthusiasts, and the open access that Formula Drift has given to them is truly unique. We look forward to working with the series and teams again this year to help advance the sport of drifting, while creating awareness about technician training and careers throughout the industry and motorsports.” 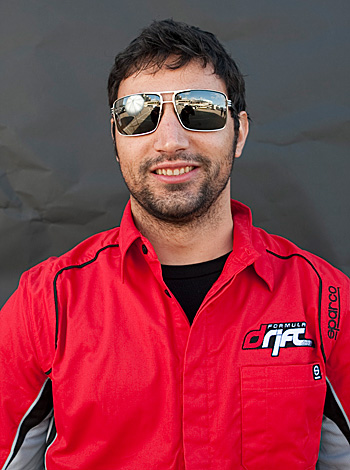