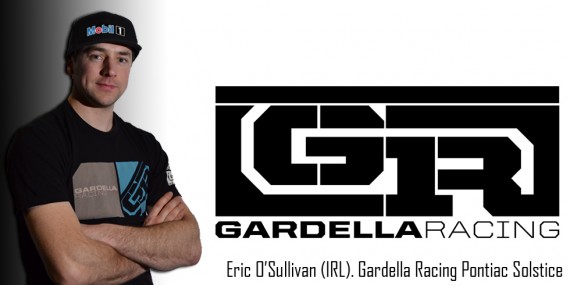 In an exciting move, O’Sullivan will re-locate to Gardella Racing’s headquarters to become heavily involved as both a team driver and Gardella Racing Ambassador in the Formula DRIFT and grass roots programs.

Speaking on the announcement of the move Eric O’Sullivan stated, “This move is a dream come true for me. I am extremely proud and honored to have been given this opportunity with Gardella Racing. Gardella Racing is a team that I have always admired for their professionalism and commitment to top-level motorsports and I am delighted to now be part of the team. Our plans for 2011 are extremely exciting and I cannot wait to get behind the wheel of the GR Pontiac Solstice and begin preparations.”

Following an extensive search for a 2nd driver via the team’s social media network , Gardella Racing Team Owner Gary Gardella also commented on the deal , “There are a lot of talented drivers out there, many of whom applied to be part of the Gardella Racing team.  Eric was the one driver who stood out and met all of the qualities I was looking for in a driver,” continued Gardella. “He is a champion driver,  a great spokesman for partners, and a team player, expecting to be more involved in the team in addition to driving.”

More details on the extent of O’Sullivan’s role with Gardella Racing will be   revealed over the coming months when the Irish driver will travel to New Jersey and be officially introduced to his 2011 team and vehicle.

Check out the video of Ryan Tuerck and team owner Gary Gardella talking about how important it is to have a solid team to be successful in the sport of drifting.

Filmer Andy Laputka has put together a great video that compares drifting and action sports through the eyes of professional BMX riders, Chad Kagy and Scotty Cranmer. Formula DRIFT drivers gave these BMX pro’s a shotgun ride along at Wall Speedway during the Round 3: The Gauntlet event weekend and the BMX guys returned the favor by taking them behind the scenes at the local BMX/skate park, The Incline Club.

Formula DRIFT drivers Ryan Tuerck, Vaughn Gittin Jr., Chris Forsberg, and even judge Tony Angelo took up the offer and tested out the foam pit. A comparison was made with Formula DRIFT and drifting being the next action sport…could we possibly see drifting in the X-games?